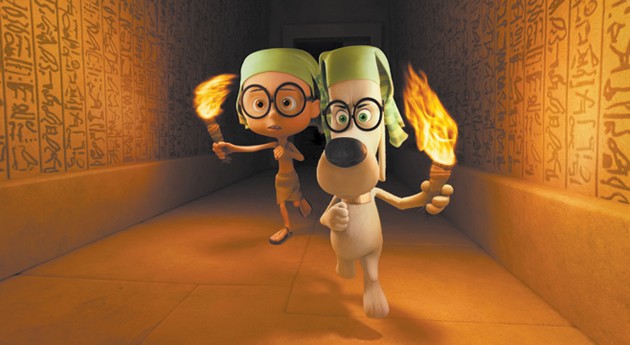 Mr. Peabody (voiced by Ty Burell) and Sherman (voiced by Max Charles) race through a pyramid in Ancient Egypt as they try to save history. The modern reboot remains faithful to the spirit of the original educational shorts of the ‘50s and ‘60s. image courtesy Dreamworks Pictures

“Mr. Peabody and Sherman” is animated, it’s rated PG and it’s got more potty jokes than a 4-year-old comedian, but its subtle lines and historical references are all for a more sophisticated set.

For anyone unfamiliar with the “Peabody’s Improbable History” educational shorts from the ’50s and ’60s, Mr. Peabody (here voiced by Ty Burrell) is a genius dog who takes his adoptive son, Sherman, back in time for real-life history lessons — and misadventures. Think an early “Magic Treehouse Adventures,” but with more puns.

Those first-hand glimpses to the past, however, prove to be a little problematic when Sherman (voiced by Max Charles) corrects a fellow student on his first day of school. The student, Penny (voiced by Ariel Winter), seeks revenge for her embarrassment, and the resulting scuffle results in a cruel and ruthless Child Protective Services worker, Ms. Grunion (voiced by Allison Janney), threatening to take Sherman away.

Seeking to smooth things over before Ms. Grunion can have her way, Mr. Peabody throws a dinner party for Penny and her parents (voiced by Stephen Colbert and Laurie Mann). A slip of Sherman’s tongue reveals the existence of the time machine, called the WABAC, to Penny, though, and she forces Sherman to show it to  her. When she gets stuck in Ancient Egypt, Sherman must enlist Mr. Peabody’s help.

The ensuing trip through Egypt, Renaissance Florence and Troy eventually ends creating a hole in the fabric of space and time (don’t all time-travel trips end that way?), and fixing it might take more than even a genius like Mr. Peabody. Amid all the turmoil, Mr. Peabody must deal with the challenges of parenting and a child growing up.

Mr. Peabody is as puny as ever, and misadventures they get into during the course of their travels are as wild as you’d expect. The story ends a little predictably, but it’s an enjoyable ride all the same.

There are, as I mentioned, a lot of bathroom-related jokes.

If you are gravely offended by the word “poop,” do not see this movie.

The poop jokes, and the sight gags, those are geared to the youngest members of the audience. And then you have the slightly more intelligent jokes, like Leonardo DaVinci (voiced by Stanley Tucci) talking about that time when he tried to invent a child, and the puns (“I just don’t understand you kids,” Peabody says as they leave Egypt. “Maybe I’m just an old Giza.”). And then on top of that, you have the history jokes, like Agamemnon (voiced by Patrick Warburton) talking about Oedipus’ family dinners.

If I could pick a target audience, I’d say the somewhat older child with an interest in history. But I honestly can’t think of a demographic that would be left out in the cold. It’s a faithful enough translation of the original shorts to please adults who remember them from their childhood, but there’s a steady enough supply of jokes for everyone who missed out.

That’s a pretty rare quality in a movie. But if there’s anyone who could do it, it’s Mr. Peabody.