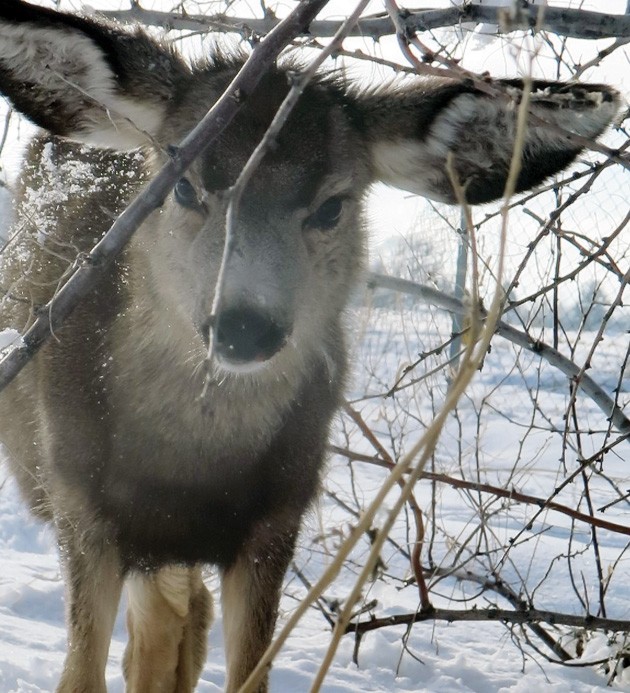 A young mule deer was spotted just below Settlement Canyon hiding in a field. It was left unharmed and undisturbed.

Due to decreased temperatures and the great snowfalls occurring in Tooele, many mule deer have been seen moving from the mountains to the lower elevations for better feeding opportunities in the outskirts of the county.

Mule deer have been known to migrate according to the weather or season not only to seek more food, but also in order to maintain their ability to evade from threats by stotting. Also known as pronging or pronking, stotting, or a series of leaps in which all four legs concurrently leave the ground, is a common behavior particularly used by many quadrupeds. Mule deer do this in order to see over thick vegetation or escape predators; however, snow that is deep enough can make stotting more difficult or impossible for them to accomplish.

Besides the ability to stot, they can reach up to 45 mph for short distances. The mule deer is also defensively advanced with keen hearing, sight, smell, and camouflaging colors. These additional advantages can help them evade predators before they are spotted or while they are still a good distance away.

Though mule deer are instinctively made for retreating and show a lot of defense, bucks during their breeding seasons begin to show their offense when combatively claiming their dominance for does. Varying from fall to December and January, the aggression in bucks increases as they antagonistically fight other bucks for the chance to mate with the females. Bucks, being polygamous, will mate with any receptive doe, and it is generally the largest bucks to dominantly copulate the most. After breeding season, aggression towards other bucks subsides sometime during the winter when they shed their antlers. It is not until the next breeding season that their aggressiveness returns, along with their newly grown antlers.