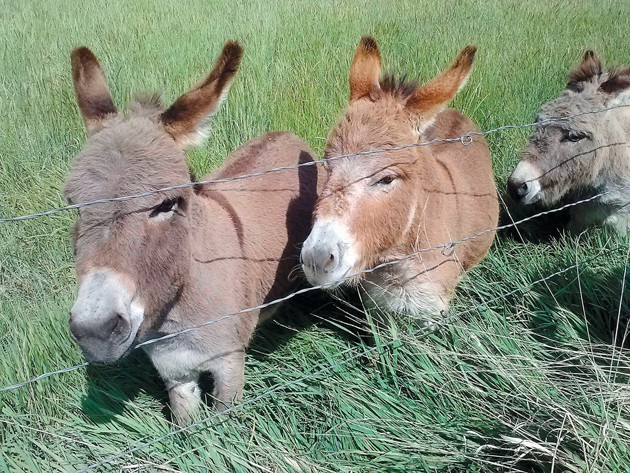 Three donkeys curiously watch as they get their yearbook pictures taken.

Mules and donkeys have been a major economical laborer for man since the ancient of times. They both are known for their useful intentions for man’s work. Most of their deeds include transportation of goods, livestock guardianship, pulling wagons, riding and the help of building man’s desired work.

Both breeds are popularly known for certain chores, for example: from the past and even to this day, donkeys have been bought for the protection over sheep and goats. By doing so, donkeys will begin braying aloud to warn the herd of a threat’s presence. If a predator continues its pursuit, donkeys will aggressively take action before it becomes too close to the herd. They will chase and even attempt stamping predators to death! These predators include bobcats, coyotes and foxes.

According to archeological study, the domestication of donkeys first began to take place in Egypt or Mesopotamia around the time 3000 BCE. From the wall murals of King Tutankhamen’s tomb, archeologists have learned that while donkeys were still being progressively domesticated, people still hunted them in the wild. During this period, donkeys were mainly herding animals intended for dairy, meats and carriers for humans and their belongings.

As for mules, they are recorded from all over the world that they were the most advantageous breed of all. Many in the past preferred mules to donkeys, and even ranked them more valuable than horses. As for some of their most popularly known uses, mules helped the building of the Rose Bowl in Pasadena, the Panama Canal and also pulled boats along the Erie Canal.

Interestingly, the first mules produced came from the donkeys that Christopher Columbus first brought from his second voyage in 1495. During this period, while donkeys were used for transporting gold from mines, mules were ridden by the Spanish to accomplish their vanquishments.

Two interesting facts, by sight, a mule is usually larger than a donkey, closer to the size of a horse and its coat in the summer is more like a horse, where a donkey’s coat has longer, courser hair. In the winter months, a mule’s hair grows closer to that of the donkey’s hair.

Addie T. Lindsay is 17 years old. She is an accomplished writer and photographer of wildlife creatures, big and small. She can be reached at CritterChatter@Live.com