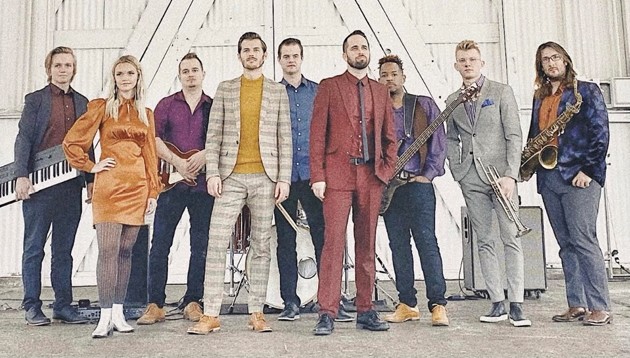 Music City Groove, a Utah band, will play at Fridays on Vine.

Music City Groove, a band that plays popular hits — both current and past, will perform at Fridays on Vine Friday evening.

The performance will take place at the Aquatic Center Park in Tooele City, located on the corner of 200 West and Vine Street.

“We will do one or two songs from the 50s and the 60s, then maybe five or six songs from the 70s, maybe eight songs from the 80s, and more as it gets more modern,” Chad Truman, band creator and lead singer said speaking about the band’s performance style.

The band chooses songs that will make their audience want to dance.

Music City Groove was established after Truman recruited his friends to join a band with him.

“Even in college, I remember thinking, ‘Man, I would love to start a band,’” he said. “Instead of just being around a DJ, I wanted to have a band. DJ’s are great but I wanted a full band with horns and stuff. Two and a half years ago, I knew I could do it. I knew enough about the industry, so I asked my main bass player friend, my main keyboard friend, and just my main friends and we made a video. Once we had a video, our agent could show it to potential clients.”

Since the band was established, they have played in Wyoming, Colorado, and all around the State of Utah.

“It’s been really fun,” Truman said. “Even through COVID, we were able to stay together.”

The band is excited to perform Friday evening.

“We are excited to see people up dancing and enjoying their experience,” Truman said. “It will be a break from the not so fun parts of life and work.”

Those interested in attending the performance should bring a blanket or chair to sit on.

“Our performance will be family-friendly with high quality musicianship and singers,” Truman said. “This sets us apart.”