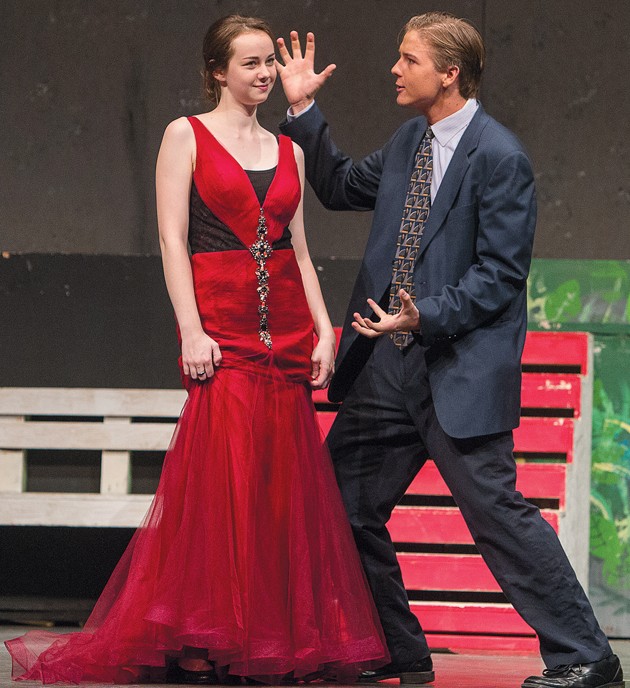 The ocean liner SS American, along with a crew of colorful characters, is coming to Tooele High School this week.

Tickets cost $7 for adults and $5 for children, seniors and students at most performances. There is a $1 discount for the shows on Nov. 15, 16 and 19.

“It’s a girl meets boy [story], and the girl is engaged to a wealthy Englishman so he has to win her back,” she said. “What intrigues me about this show is there are lots of little vignettes. … There are no clear scenes; it just flows.”

Another unique aspect of the musical is it includes a lot of dancing.

“The kids have worked hard on it,” McGovern said. “It’s meant for Broadway, with a lot of dancing. The kids all learned to do basic tap.”

“It’s just a riot,” said Tatiana Bothell, who plays Erma. “It’s a good time. No matter what part of the show you’re in, you feel the emotions, … whether it’s happy or sad or love. I think it makes it an engaging show.”

Bothell loves acting like Erma, who she describes as Moonface’s confident, sexy sidekick.

“She works with Moonface … but she’s also a very independent woman,” she said. “My favorite thing about her is to play that confidence. It’s unconditional, no matter what happens.”

“Let’s be honest, his personality is just me with a British accent,” Hofeling said. “He’s weird, quirky and awkward. It’s really fun.”

For Robert Gordon, the actor of Billy Crocker, rehearsal for “Anything Goes” is the best part of his week.

“This is the most happy play I’ve ever been in,” he said. “It’s worth the time. … It’s so funny. It definitely will brighten your day if you’re having a bad day. Bring Grandma too, because old people love the play.”

Gordon’s favorite thing about the show is its dramatic comedy.

“I love the dramatic irony, where the audience knows exactly what’s going on, but the characters not so much,” he said.

“What I like is she [Reno] is very different from myself,” Marin Legge said. “She’s very outgoing and independent and doesn’t take crap from anybody. She wears these outfits that are a bit seductive, but she also plays kind of hard to get.”

On the other hand, the character Hope Harcourt is less outspoken.

“She’s very opinionated, but she can’t seem to get her feelings out because of fear,” Eden Legge said. “She does a lot for her mother because she loves her. … It’s a challenge because I’m used to playing a spunky person and she’s more conservative.”

Jake Lemmon, the actor of Moonface, likes the dances in the show as well as his role.

“Moonface Martin is pretty much the gangster who helps Billy throughout the whole thing, not only in getting him on the boat but in his relationship with Hope,” he said.

The cast, set and costumes have come together over the months of rehearsal, McGovern said.