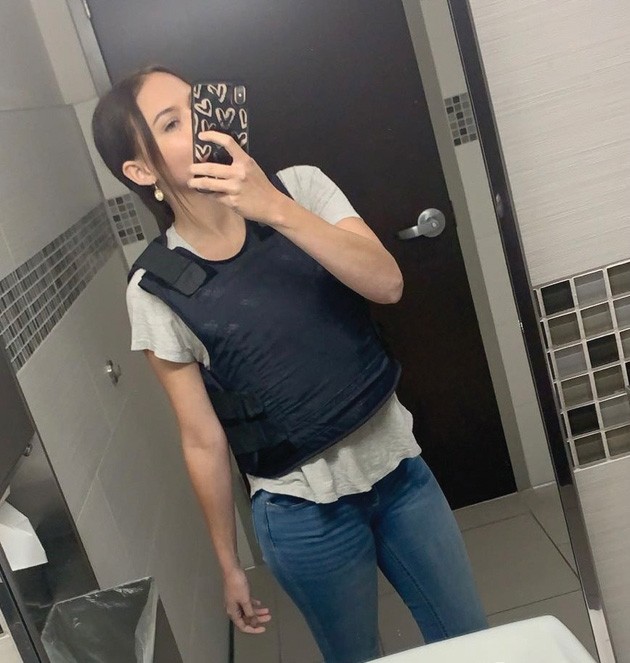 Ceilly Sutton takes a selfie after putting on her bulletproof vest.

September 9, 2021
My experience on a ride-along with the task force

The Tooele County Major Crimes Task Force Commander Chief Brian White, invited me and the County Council members to ride along with the Task Force on the night of Sept. 2.

When I received a text from one of the officers on the force inviting me to come out, I thought it might be a fascinating thing to experience at least once in my life. The officer informed me that I would have to sign some sort of a waiver and wear a bulletproof vest. I agreed, because I somewhat like the idea of scary, thrilling experiences.

After my class ended that evening, I drove down to the Tooele Police Station, ready for whatever — or so I thought.

When Lt. Hansen, the Tooele City Police Department public information officer, who I talk to for articles all the time, I met the council members who we were riding with. We got in the back seat of an undercover patrol truck. I was hoping to ride in a real police car with a steel mesh cage or bulletproof glass, so I could say that I’ve been in the back of a cop car, but an undercover truck was pretty cool too.

I was handed a bulletproof vest, which I put on and it was surprisingly more comfortable than I imagined it to be. I was also given the waiver to sign and it mainly said that if something crazy happened to me, only I was liable or something like that, and that I was to keep all names, addresses, and finer details of the Task Force’s operation a secret.

After I signed the waiver, we were off to the first problem that the force had to solve.

Riding along with the police during an operation shows you a perspective of the city and surrounding areas that you don’t normally see during day-to-day life.

When we arrived at the first traffic stop, which involved a pullover for a traffic violation, I realized that many community members driving by the scene of a police pullover nearly wreck their cars when looking out their side window to see what the police may be doing.

It’s kind of ridiculous, because if what the officers are doing is that important, all the information will be circulating in the media very soon. It’s best to just keep driving at a reasonable speed and allow them to do their job.

After the first traffic stop, we headed to another undisclosed location for an arrest. When we pulled up, everything around the area was dark and the Task Force didn’t want to draw attention to the neighborhood that they were making the arrest in, so they turned off all their lights, and very quietly escorted the man they were arresting to one of the police vehicles from his home.

Sometimes it takes many officers to do what seems like one simple job, but it is important for them to have backup, just in case the operation doesn’t go as planned. At this particular arrest, there had to have been around seven members of the task force waiting around to make sure everything went smoothly.

Next, we drove back to the police station for a briefing on another operation that they were going to be carrying out at a house. The task force planned to serve a search warrant on a high-profile house and they needed a good, solid plan. All of the officers, along with the county council members and I, sat in a circle, and an officer got up to go over the plan on the white board at the front of the room.

Then, they started talking about what kind of potential weapons they may need if things went south during the operation.

I know that the thought of guns scares some people but it’s almost normal to me, because I have been exposed to them and have shot them in a safe manner, but I can imagine how shocking it would be for someone who had never been around guns to hear about and see all of them. They also talked about what tools they may need for the operation.

Hearing the names of several different types of guns called out wasn’t shocking, but what was shocking was when one of the officers looked at Lt. Hansen and said, “Do you have room for a body in the back of your truck?”

I was thinking, “Excuse me, what? Is this operation really going to be that scary?”

I later realized that the officers have to discuss every possible scenario that may happen when they serve a warrant, because they really don’t know exactly what will go down on scene. A number of different things could happen, like a police officer could be hurt or killed during the operation.

When all of the officers arrived at the house — and I would say there were about 13 to 15 of them — they jumped out of their vehicles, surrounded the house, and said “Police, we have a warrant” or something like that. It was kind of like what you see in the movies.

It took a while but they finally were able to get inside the house, because the officers were trying to call out the occupants of the home in a controlled fashion. The police dog, Lilly, waited patiently, but eagerly, to enter the house looking for drugs or whatever she might find. I wanted to pet her, because she was so cute, but she is a professional working lady.

From my experience I learned that we really do have good police officers from different departments that make up the Task Force. The Task Force does their best to keep our community safe. If we didn’t have them, we would have a few too many high-profile criminals running around.

The next time you see a police officer, try not to automatically think bad of them. There are some bad officers out there, and it shouldn’t be that way, but a lot of them are good, honest individuals trying to make a living and would actually put their lives on the line for you any day.