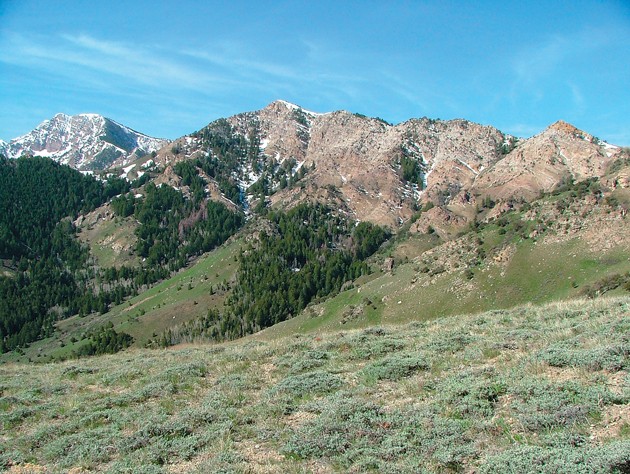 Northeast face of Davenport Peak as seen from the upper slopes of Baker Peak Ridge.

“Life consists with wildness. The most alive is the wildest, not yet subdued to man, its presence refreshes him.”

After military drill one night, I decided to go out to North Willow Canyon and take another shot at Davenport Peak. It had defeated me twice before from the east approach due to the fact that I could not find the old trail to Pass Canyon, which is Trail 034 on the old Forest Service Maps.

When you bush whack for a while on steep slopes it sometimes wears the novelty of the situation right off, but this time I was determined to reach the summit. I drove my truck past O.P. Miller Trailhead and parked near the gate where Forest Road 001 (North Willow Road) and Forest Road 539 (North Fork North Willow Road) separate. The stretch of road from O.P. Miller Trailhead to my parking spot is pretty darn rough, so you can spare your vehicle some wear and just park at the trailhead and walk the road.

I got my gear on, secured the vehicle and started on my hike at 6:10 p.m. I headed west on Forest Road 539 and in about 100 yards, I came to the first stream crossing. There was a decent flow, so much so that I had to carefully pick my way across on some strategically placed rocks. This soothing sounding stream is located in mixed forest of aspen, fir and cottonwood. About 1/8 mile farther along, I came to the second stream crossing. This is a much smaller stream than the first one, but there was a good flow here as well and I noticed some brilliant green, almost hairy looking moss on the rocks with rivulets of water moving between and around them.

There are some stately old Douglas fir guarding this crossing. Once across the creek the road divides and you have a choice of a sharp right to the east or to stay on the road heading west. The road on the right leads to the old Dragon Mine claims. Instead, keep left and continue climbing to the west. You will know you have taken the right road when you see an old sign at the base of a tall fir stating that the road you are on is 539.

There are some deep fir and spruce on the hill south of the road with some aspen mixed in at this point. It was warm and quiet, except for the clicking and scratching noises that the locusts were making. After awhile I came to the third stream crossing and there was a good amount of water in it. This stream comes from a mossy spring or seep that is located about 100 yards to the northwest of the road up a draw.

The road passes in between two large aspen as it crosses the stream. This is a pretty spot in autumn when the aspen leaves are golden. The stream runs on the road bed for about 50 feet here and the water was clear as it rolled over the stones of the stream bed. Once across the stream, you will enter an open sagebrush/grass-filled clearing with some aspen by the stream and battalions of evergreen forest to the south on the hill.

The trail then enters the trees again and comes to a junction. If you stay straight, you will come to a dead end in the deep fir forest in about 75 yards. Instead, take the right fork of the trail that drops steeply down into a dry river bed and then just as steeply up the other side where there is a small muddy seep and some bleached fallen logs in green grass below some fir trees.

It was now 6:45 p.m. and I pushed myself ever harder because I wanted to get to the ridge top in time for the sunset over the Cedar Range across Skull Valley. After a few more minutes of steep climbing on a fairly decent old track, I came to one of the most recognizable landmarks on this route called “Knob Rock.”

This rock is a white colored rock that is all alone, shaped like a gnome’s hat, sticking five feet out of the grass on the north side of the road. There is also a large lone pine north of the rock. This rock is visible on Google Earth and from a distance down the trail as you approach from the east. The road up to that point is steep for a stretch.

Not far beyond Knob Rock is a steep, open grassy/bushy slope on the south side of the road that resembles a ski run cut through the pines. This is where I should have ascended to the ridge in order to intersect old Trail 034, which runs just down from the crest of the hill on the south side. I chose to follow the map instead, believing that the next segment of the trail would be there. It was not.

The point in the road where it turns back sharply to the north east, not far beyond Knob Rock, is what I call the “hairpin” turn. I have to give features on the landscape names so I will have a point of reference for conversation — hopefully they are not too corny. Anyway, on the old map, it shows Trail 034 angling to the southeast up the hill off of the west corner of the hairpin turn of FR 539. The trail may have been here at one time, but it is certainly not there today. Knowing that the trail I wanted was up on the ridge just off of the crest to the south (because I saw it there on my Google Earth route recon), I decided to bushwhack my way up to the top of the ridge.

This turned out to be a grave mistake as I was wearing shorts and the vegetation was thick, consisting mainly of poison oak and thorns. My legs and arms were scratched and on fire from the irritating plants by the time I reached the crest of the ridge, which was a distance of only about 100 yards. On the top of the ridge the forest ends and the south facing slope, as is the case of most south facing slopes in the Stansbury Mountains, was bare of any vegetation other than low growing brown mountain grasses. I immediately found Trail 034, which is faint but easily followed, and I headed west along the ridge top.