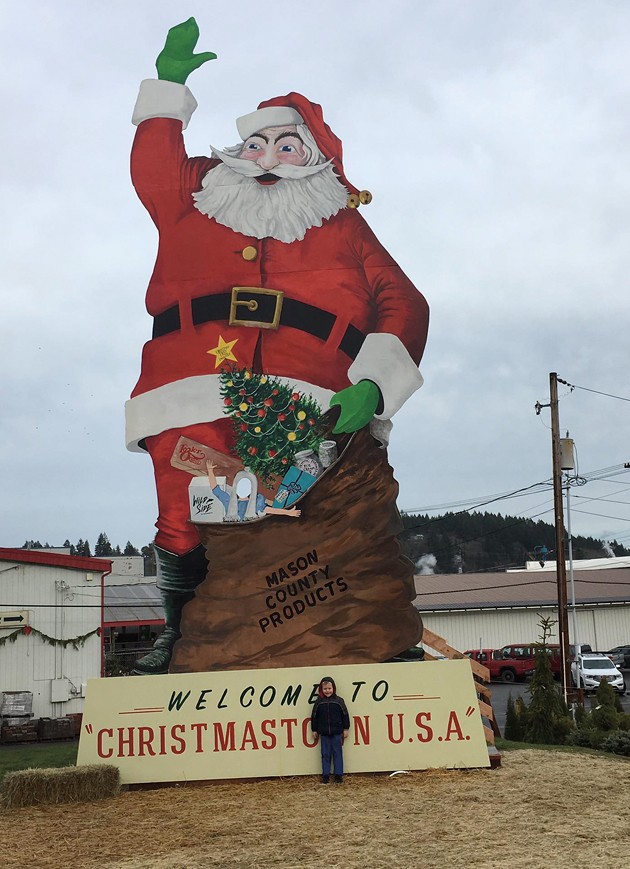 After years of absence, an iconic 32-foot high Santa Claus has returned to Shelton, Washington, the childhood home of Staff Writer Tim Gillie. While he lived there, the community on Puget Sound claimed the title of “Christmastown USA.” The child standing in front of Santa is Austin Stewart. (Photo courtesy of Cheryl Stewart)

December 24, 2018
My old hometown is once again Christmastown USA

Santa Claus is back in town.

Back in Dec. 2007, I wrote about the small town of Shelton, Washington, where my childhood memories of Santa Claus begin.

Shelton is or was a lumber town at the bottom of Puget Sound.

According to the U.S. Census Bureau, the town’s population was 9,834 in 2010. If you believe the internet, the estimated population in 2016 was 9,980 — not exactly the fastest growing place in the world.

It’s still a magical place. I stay in touch with Shelton by a Facebook page for residents, past and present.

I think about Shelton at Christmastime because that is the place where I would take one last look at the twinkling lights on the tree before I headed upstairs on Christmas Eve.

Walking up the stairs, I would stop and look out the back window at the Monkey Puzzle tree. It was always lit up at Christmas with lights, too.

Reaching my bed, before climbing in, I would wonder what visions of dancing sugar plums looked like. I’m not sure I even knew what a sugar plum was — and I still don’t.

Nevertheless, later, rather than sooner, I would fall asleep.

As soon as I awoke, I would run downstairs to see packages piled under the tree.

I never knew as the third child of two school teachers that we weren’t rich and the presents came from a Santa who lived far closer than the North Pole.

Christmas also takes me to Shelton because, at least while I lived there, it claimed the title of “Christmastown USA.”

The Christmas tree farmers of Mason County, where Shelton is located, boasted that the county was the world’s largest producer of Christmas trees. Trees were shipped from there to all over the world, including Utah.

There was a huge plywood Santa Claus that sat near the downtown post office. He stood there with his pack of toys open while he waved with one hand to everybody.

I wrote in 2007 that the Shelton Santa was at least 60-feet high. I guess when you are little everything really does look bigger. I understand now that Santa was only 32-feet tall.

The face on one of the dolls in Santa’s sack of presents was hinged.

Children could climb stairs behind Santa, open the face and insert their own face in the hole. Mom or dad could take a picture with their camera from below of Santa with their child’s face on the toy doll.

During the summer of 2007, I returned to Shelton with my children.

I wanted them to see Christmastown USA and perhaps get a picture of them in the Santa Claus toy sack.

But to my dismay, Santa was gone.

My heart sunk as one more child memory became just that — only a memory.

As I wrote in 2007, since that time I felt a little like Citizen Kane calling out for Rosebud.

But Shelton is a resilient town full of spirited people, despite the shutdown of Shelton’s lumber mill.

Much like many small towns across America, Shelton’s downtown has been pillaged by the arrival of large national box stores on the edge of town.

However, the spirit of Christmastown hasn’t died. It may smolder, but those gray coals are still hot.

I was excited to see on Facebook that a few weeks ago, somebody had taken on the challenge of returning Santa to his proper place.

With the help of a few local citizens, some businesses, and a service club, Santa Claus is back in town.

The old Santa Claus was located at a nursery. At around 56 years of age, and without maintenance for many years, the old Santa was in no shape to be erected again.

But that didn’t stop this enthusiastic group with a mission. A new Santa was built to look just like the old one, complete with a missing doll face and steps on the back side.

The new Santa was set up in a prominent location as people come down the hill into the downtown area.

I’ve read that the new Santa won’t be up year around, but he’s there just for the Christmas season. That’s probably best; it will be easier on maintenance and less likely a target for vandals.

But the big news is that Santa is back in town.

I can hear the town singing.

The spirit of Christmas, that spirit which brings people together in the darkest and coldest time of the year, lives in the hearts of women, men and children everywhere, not in wooden Santa Clauses.

It was exciting to read of the effort to bring Santa back to Shelton.

To all my friends, and everybody else, Merry Christmas and Happy Holidays. May the new year bring you joy and happiness.