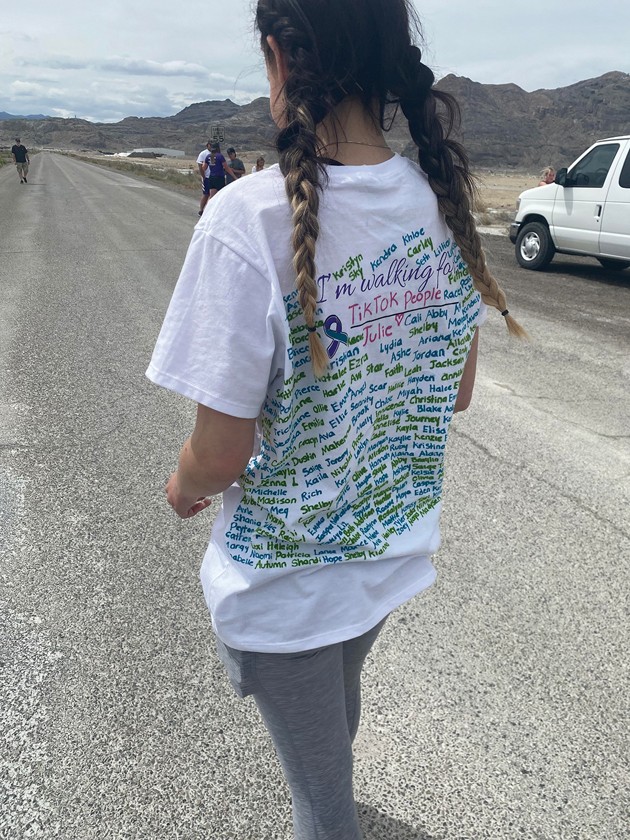 Ceilly Sutton walks to Wendover with a T-shirt full of names.

May 4, 2022
My second experience walking through the desert for suicide awareness

As many of you may remember, I participated in the Walk to Wendover with the Life’s Worth Living Foundation last year. I had such a positive experience that I decided to do it again this year.

Also, as many of you know, those of us who belong to the “younger generations’’ enjoy social media and we often end up spending more of our time than we would like to admit on Facebook, Instagram, Snapchat, and TikTok.

I know a lot of you may believe these platforms can be more negative than positive and I agree. I won’t debate you on that, but what I do know is that sometimes good can come from them.

On Thursday evening, I made a TikTok video asking those who had attempted suicide, had experienced suicidal thoughts, or had lost someone close to them to type their name in the comments of my video so I could write their name on my shirt that the Life’s Worth Living Foundation gives participants prior to the walk. I thought maybe 20 or so people would comment and I could write their names and walk for them, but I was wrong.

I woke up the next morning shortly after 4 a.m. and looked at my phone. I was shocked. There were over 2,000 comments with name after name of individuals who had struggled in one way or another. Many comments even had multiple names.

One girl commented that she had attempted suicide the day before and was struggling, another wrote that she had lost her brother and father to suicide, and there were numerous others talking about how they had attempted several times, and the comments kept coming.

At first after reading all of the comments, I felt extremely sad.

How had so many people struggled and lost loved ones? Was suicide actually that common? I knew I had felt those feelings before but at the time, I thought I was alone.

Of course, I later realized that I wasn’t, but the statistics are shocking. I found out by a quick Google search that suicide is the 10th leading cause of death in the United States and on average with each suicide, over 120 people are affected.

I also found out that in 2020, more than one in 10 Americans considered suicide during the pandemic. I’m sure those numbers are still close to that today. These statistics are absolutely sobering.

As I got ready for my walk, I knew I was going to have to write as many of those names on my shirt that would fit but I also knew the comments were still flooding in. So during the first day, I didn’t do anything with my shirt. I did, however, think about each and every one of these people while I walked.

I remembered their names and said a short prayer for them. I also remembered the people I knew personally who had struggled in one way or another. I think these names kept me walking after my legs nearly gave out and I began to feel inspired, rather than sad.

When we arrived home the first evening, I began working on my shirt. At this point, there were over 2,500 comments on the video. I began going down the list writing each name that would fit on the back of my shirt. After about an hour and a half, I had to go to bed, so I packed up my shirt and markers, determined to work on the shirt more the next day.

During the walk, participants walk in a relay fashion, meaning that between the two groups, 100 miles are covered with each individual having the option to walk a maximum of 50 miles. Those who are tired are able to ride the bus whenever they want and get off when they want, so most people don’t quite make all 50 miles.

During my time riding the bus, which was trailing along behind walkers at a speed of 3 mph, I wrote hundreds of names on my shirt and allowed time for the shirt to dry out.  I got out of the bus and walked listening to the same two songs on repeat for hours with my mind still thinking about the individuals who had commented on my video.

When arrived at out hotel room in Wendover I checked my video, it now had over 3,000 comments.  I promised commenters that I would continue to write their names on my shirt over the next week, so I am still working on that. It really takes hours to write that many names.

I think the most important thing I learned walking this year is how common suicidal thoughts and suicide really is. If you are struggling and you think you’re alone, please know you aren’t. Suicide surpasses the lines of gender, religion, age, beliefs, and social class. There are people living in mansions with fancy cars and yachts that are struggling just as much as the people who live under a bridge in a box. You can be the happiest person ever and still struggle. Suicide is not a respecter of persons.

We must be kind to everyone we meet, not just the people we like or the people who are nice to us. You never know what someone is going through and the nasty comment made to them that seems like nothing to you could heighten their struggle. Please be kind.

Call the National Suicide Prevention Hotline at 800-273-8255 if you or someone you know are struggling. You can also call the Life’s Worth Living Foundation at 435-248-LIVE.