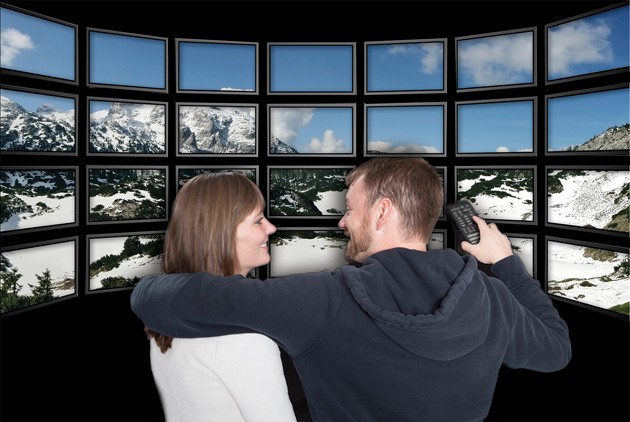 Sports Editor Tavin Stucki is considering the benefits of owning more than one television, much to the dismay of his wife Arie. Tavin likes to watch sports while Arie prefers politics. (photo illustration Francie Aufdemorte)

When I got married, I knew my wife was a die-hard politico. I knew she had done some volunteer campaigning and has attended a presidential inauguration ceremony in Washington, D.C.

Likewise, she knew my calendar has mostly revolved around sports. She knew we wouldn’t ever get a date night on Fridays in the fall and I would watch basketball every night of the week during winter.

But on Tuesday night, I think we learned a little better about how deeply the other enjoys their interests.

Our apartment only has room for one television, and one screen was not enough to watch both the National League Wild Card Game and the Vice Presidential Debate at the same time.

There was no shouting or fighting — at least not between the two people present in the room — and luckily the baseball game went into extra innings. We found a good system: baseball will be on until the mid-inning commercial break, and the CNN analysis panel would be on until a commercial.

In today’s world where electronic equipment is produced at a relatively small cost, Tuesday’s issue raised a question or two about the current technological setup in the Stucki household: Is one television really enough to quench the demands for information about our two favorite news categories?

Think about it. Why not have more than one screen?

When it comes to space, why not mount one flatscreen TV on the wall and have a second right below, each controlled by a separate remote? Sound isn’t really a problem because who really wants to listen to FP Santangelo, am I right? Even if I felt like I wanted to absorb the commentary, I could always turn on the closed captioning subtitles.

But why stop there?

In college, I lived with a few other guys who love football as much or more than I do. We had two massive plasma TVs next to each other with another large-but-seemingly-tiny flatscreen off to the side. Any given Sunday we had three NFL games on those screens, with the option to have a fourth on a laptop so we could all easily keep track of our fantasy football players. It was a huge benefit during March Madness as well. And in summer, it was easy to watch the NHL playoffs while someone else had a movie or video game going.

Now that I think about it, I’m not sure how I managed to get any studying done or why I ever moved out.

Back at home, I think I could do a lot to help alleviate the decision-making process when it comes to the classic news-or-sports question. And now that Arie and I have taken a liking to NBC’s new “This is us,” I see a lot of reasons to stop at Liddiard’s and spend a couple thousand bucks on a few wall-mounting kits and flatscreen TVs.

That is, as long as my wife doesn’t hate this idea as much as Mike Pence may hate defending his runningmate.

Sports Editor Tavin Stucki has decided politics aren’t so bad after all. Send any comments or suggestions on how to maximize TV viewing potential to tstucki@tooeletranscript.com.