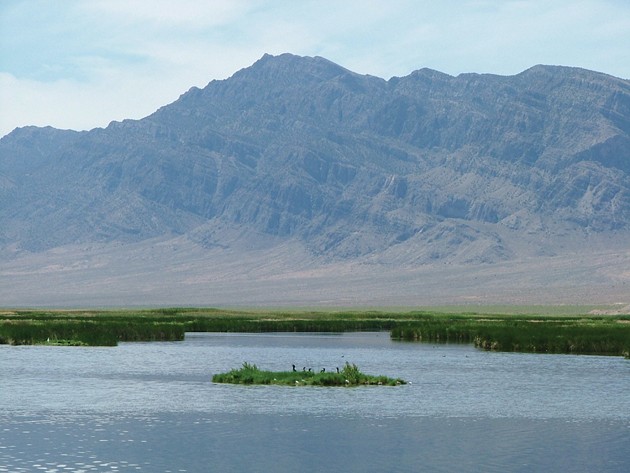 Editor’s note: This is another installment in a multi-part series on exploring the Pony Express Trail through Tooele County. Last week’s article continued a review of Fish Springs National Wildlife Refuge.

“I love the desert and its incomparable sense of space.”

Fish Springs has been a focus of this column for a couple of weeks because it is a unique and remote place in the middle of the West Desert.

The entire area is encompassed by Fish Springs National Wildlife Refuge, which consists of 10,000 acres of wetlands, 4,000 of which are pooled water, and the remaining 6,000 acres are saturated wet meadow.

The springs discharge a constant flow of 30-cubic-feet per second. The water comes from a large group of springs, but a third of the entire flow comes from Middle Spring.

The springs are thermal, slightly brackish, and maintain a temperature of approximately 74 degrees Fahrenheit year-round. The largest pond at the springs is approximately 400 acres, which is a considerable body of water.

For thousands of years, peat bogs formed at the springs, creating deep biomass that was not conducive habitat to many forms of wildlife. When the Fish Springs NWR opened in 1959, a plan was devised and implemented to impound or section off various bodies of water in the refuge by utilizing a system of dikes.

With the dike system, the refuge now routinely drains and floods areas of the marsh. When a pond is drained, it is allowed to dry out for several years, which in turn allows the biomass to decay and enrich the land. The next time the marsh is flooded, it is a much better environment for fish and water foul.

As for fish, there are four different types in the springs, but two are most common. First, the Utah Chub, which is indigenous to the springs. It resembles a carp in appearance and can grow up to a foot long with a heavy body build. The other is the Gambusia Mosquito Fish, which was introduced to the springs.

There are also several types of mollusks, including spring snails and the “Chinese mystery snail,” the name of which cracks me up every time I think about it. Speaking of mysterious things at Fish Springs, there is also a healthy population of large African Bullfrogs.

After World War II and in the early 1950s a commercial frog farm operated at Fish Spring. It used old World War II landing craft as production tanks. When the refuge was established, for various reasons the frog farm ceased operations and the creatures went free.

One time I was standing near a bridge on the auto tour route, staring at the water, when I saw a large creature jump out of the corner of my eye and hit the water with a “plop” that sounded like a large rock had dropped into the water. It was a large African Bullfrog.

It was such a strange thing to witness out in the desert. I have been told that the frogs are confined to the springs in the winter due to warmer water temperature, but when summer comes, they spread out through the marsh.

Other interesting commercial ventures were also tried at Fish Springs, including peat bog mining and muskrat farming. Just like the Bull Frogs, there is a healthy population of muskrat at the springs today. There are numerous jack and cottontail rabbits and a good population of coyote as well.

The main wildlife attraction at Fish Springs, however, is the migratory waterfowl that visit this water gem in the desert. According to Fish Springs NWR literature, there are 298 species of birds that visit or live at the springs and 70 of these species nest there.

If you visit the refuge today, bring your binoculars and camera, and plan to spend several hours on the auto tour route, which is a network of roads built on top of the dikes that you can follow to visit many of the different pools.

When you arrive at park headquarters, there is a kiosk near the entrance where you sign in for your visit and you can pick up a copy of the Fish Springs National Wildlife Refuge wildlife list.

This little booklet is handy because it lists all of the types of wildlife and birds, and it also tells you what time of year the different types of animals have been seen. If you are wanting to see a particular type of migratory bird, you can match your visit to the noted times and increase your chances of a sighting.

It is truly incredible how many winged creatures frequent the springs. Swans, geese, ducks, grebes, loons, egrets, herons, pelicans, spoonbills, storks, eagles, hawks, falcon, cranes, plovers, avocets, hummingbirds, owls, wrens, swallows, and larks are some of the bird types. Under each grouping there are as many as a dozen different varieties. It is impossible to list them all here but hopefully the copious listing of bird species will fire the imagination and make you want to visit Fish Springs.

As unique, remote and wonderful as Fish Springs is, the place is potentially under attack by large metro areas, namely Las Vegas, Nevada, which are looking with a thirsty eye to the deserts and their ancient alluvial and limestone aquifers. Proposals have been made in the past that would pump out millions upon millions of gallons of water from the Snake, Spring, Steptoe and other desert valleys to quench the thirst of a growing Las Vegas.

Fortunately, these efforts have received several legal setbacks. As far as the Snake Valley is concerned, it requires support and agreement from both Utah and Nevada for the water to be pumped out of the subterranean aquifers there. At present, to my knowledge, Utah has declined to offer any support to the idea.

The water that issues forth from the springs at Fish Springs comes up along a fault that runs deep in the ground — a crack in the earth’s surface you might say. It is unknown how large-scale pumping of water from beneath the desert valleys would affect Fish Springs. For now, the springs appear to be safe from hydrological exploitation, but it is something that we as concerned citizens should watch and comment on if the idea comes around again.

If you visit Fish Springs, make sure that you follow the road out to the site of Thomas Ranch. There are large, old trees there of various varieties and several small, flowing springs that have large fallen logs and different types of bright green mosses in them. From the Thomas Ranch, which was likely the location of the Overland Stage and Pony Express Station, look west to the mountains and you will see a low pass almost due west. This is the route the Pony Express Rider would take from this station west while the Stagecoach and most emigrants followed the route of the present road around the north end of the Fish Springs Range.

As I stood there last week, in the morning desert sun, looking down into the water that was full of tiny darting fish, I thought about how difficult life must have been here in the middle of the desert in 1860. I also considered the fantastic tale that Nick Wilson, a Utah Pony Express Rider, told about a large expedition that General Johnston and the Soldiers at Camp Floyd launched from Fish Springs to chastise the Indians. I’ve found no other mention of this other than Wilson’s account in his book “White Indian Boy.”

In next week’s column, we will head west and further explore that legend. Though life was tough at the springs back in the day, at least the station keepers had trees, water and tall grasses of the marsh. It would have been a double-edged sword however because along with those things come swarms of mosquitos.

To get to Fish Springs, follow state Route 36 south out of Tooele for 30 miles to where the Pony Express National Historic Trail heads west just north of the town of Vernon. Follow this road west for approximately 70 miles and you will arrive at Fish Springs. Make certain you have plenty of water and a spare tire. One my adventure last week, I had another flat tire, compliments of the West Desert, so be prepared, take sunscreen, bug spray and enjoy the truly unique and beautiful oasis that is Fish Springs.

Jessop grew up exploring the mountains and deserts of Utah and has traveled to all 50 states, U.S. Territories and a dozen foreign countries. He and his family live in  Park.