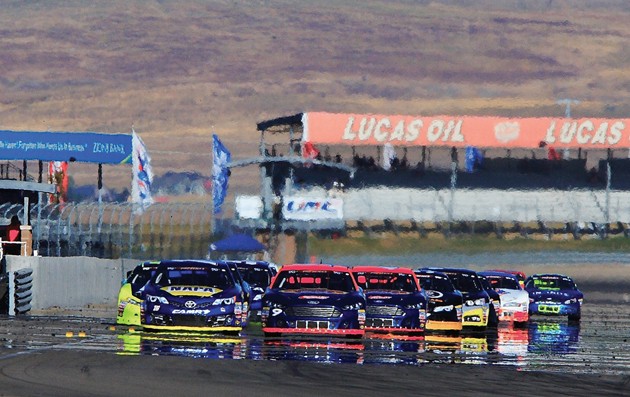 Utah Motorsports Campus (UMC) is thrilled to announce that professional stock car racing will return to Utah in 2020 when the ARCA Menards Series West rolls into the Tooele Valley on May 23 to headline the inaugural UMC Rock N’ Race Fest.

It will be a homecoming of sorts for the series, formerly known as NASCAR Winston West and the NASCAR K&N Pro Series West prior to NASCAR acquiring ARCA in 2018, which raced here annually from 2007-14 and in 2016.

The race will headline the inaugural UMC Rock N’ Race Fest, which is planned to be an annual Memorial Day weekend celebration going forward. The one-day show will also include the Fourth Annual Cruzer Palooza Classic Car and Motorcycle Show, a drifting exhibition and a concert featuring Jagertown, with local phenom Carver Louis as the opening act.

Fans will be able to purchase rental karting sessions and ride-alongs in drift cars. In addition, the new UMC Family Fun Center will be open, offering family-fun games like Archery Tag, Nerf Wars and Dodgeball. Food options will be plentiful, with both the Fast Track and Throttle cafes open for business as well as a variety of food trucks.

Admission to the Rock N’ Race Fest will be free, however there will be a parking fee of $10 per vehicle. There will be camping options available for those who would like to make it a full-weekend getaway.

“We could not be more pleased to welcome NASCAR-style racing back to UMC,” said Dixon Hunt, UMC Senior Vice President. “It’s been way too long since we heard the sound of those big V8 engines reverberating off our mountains, and we can’t wait to see the ARCA Menards Series West haulers rolling through our gate again. We appreciate the support of the series officials, and particularly the teams who pushed to bring the series back to Utah, and we’re looking forward to a fantastic inaugural UMC Rock N’ Race Fest!”

“We are very happy to bring the ARCA Menards Series West back to Utah for the inaugural UMC Rock N’ Race Fest,” said Brandon Thompson, NASCAR Touring Series Managing Director. “UMC has always been a favorite venue for our teams and drivers that has consistently provided great, competitive racing, and we’re excited to see more of that this May!”

Utah native Michael Self, who grew up racing here and was a six-time winner in the ARCA Menards West Series as well as a two-time and defending winner of the ARCA Racing Series’ Daytona 200, was excited to hear that the series is returning to his home track.

“It’s great to see the ARCA Menards Series West and stock car racing return to Utah and UMC,” said Self. “The track does such a great job of hosting not only the race teams, but the fans and sponsors as well. It’s always been a world-class venue. The ARCA Menards West Series is the premier development series for the national levels of NASCAR, so hopefully a lot of Utah race fans will show up to support some future stars of racing!”

The UMC race will be the fourth of 11 for the ARCA Menards Series West in 2020, and one of only two road courses on the schedule. It will be a one-day show, with practice, qualifying and a 70-lap race on the 3.05-mile Outer Course taking place on Saturday.

More details on the Inaugural UMC Rock N’ Race Fest will be released as they are finalized.

For event or ticket information, or for questions regarding UMC, call 435-277-8000 or visit the track’s website at www.UtahMotorsportsCampus.com.