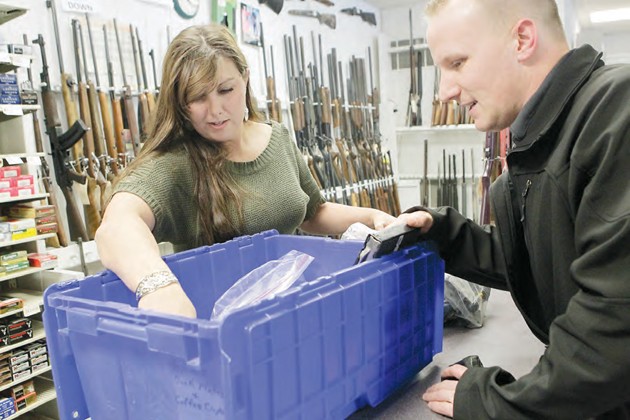 As the national debate on gun control rages and executive orders aimed at curtailing gun violence have been enacted, the effect locally is mostly felt at businesses that sell guns and ammunition.

None of the executive orders signed last Wednesday place a ban on any type of weapon. But persisting fears about future restrictions have driven many citizens to stock up on guns and ammunition, just in case, especially semi-automatic weapons.

Jason Williams, assistant manager at Tooele’s CAL Ranch store, said sales on guns and ammunition have been higher than usual since the presidential election in November, and especially since talk began of possible executive orders in December.

Kenny Gregrich, of GSI Pawn Shop in Tooele, said he has seen more interest in guns in his store recently, though he doesn’t always have what people are looking for. In the pawn business, he said, stock is not simply ordered like in other types of stores.

“The thing I get more than anything is inquiries. Where I’m a pawn shop, I’m limited to just what happens to be here,” he said. “So I get people in all the time, wanting specific items, so that’s definitely gone up, inquiries have gone up, but as far as sales, that’s tough to say because it’s just what I have. I’ve had people from Wyoming and Idaho calling looking for them, but I haven’t had any instock for quite some time. If I had, it would be a different story.”

Berkeley Reynolds, an employee at Oquirrh Traders in Tooele, said their store, too, has had a lot of inquiries, as well as a lot of gun and ammunition sales. Along with the inquiries often come questions and speculation about the executive orders, and what might be next in gun control.

Williams said much of what he has heard from others, both at the store and personally, is associated with fear that a certain type of weapon or ammunition might be outlawed. They are also afraid that their means of self-defense might be curtailed through some executive order or legislative process.

“When you have people come in and there’s an executive order, and they’re afraid of their rights being taken away, that really puts a thorn in everybody’s side,” said Williams. “And home defense, what’s going to be good for home defense. So when you add that into it, and home defense, people are going to be buying. People are afraid — ‘If I can’t get an AR- 15 I’m going to get one because I don’t want that right take away from me.’ ”

Williams said he believed concerned citizens should contact their legislative, congressional or senatorial representative, and urge them not to support any measures that could diminish gun rights. And, he said, upon purchasing a firearm for any reason, owners should take care to be educated and trained how to use it.

Gregrich said he had also heard it suggested by many inquirers that they were interested in purchasing some types of guns — semi-automatic weapons, mostly, but also large-caliber handguns — because they were worried that they would not be available in the near future. “I think people are just concerned that six months from now they’re not going to be able to get them. But I don’t actually get people telling me that’s why there’re in here,” he said.

Reynolds said Oquirrh Traders will attend a Feb. 2 gun show and have a booth — the shop’s first since Obama’s executive order. “It’s going to be crazy,” she said.