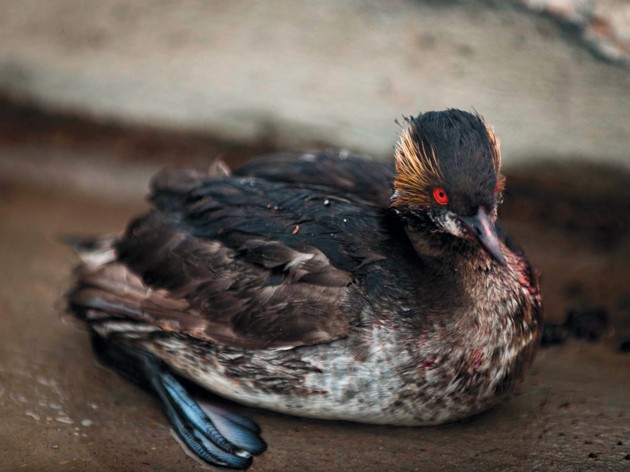 Dugway Proving Ground and wildlife officials have been working throughout the week to rescue thousands of eared grebes that crash-landed in Dugway’s English Village Monday morning.

Officials determined they were looking for water to land on and rest, but were fooled by wet, glistening pavement caused by an early-morning snowstorm.

Grebes typically only migrate at night, according to Al Vogel, public affairs specialist at Dugway. The birds mistook the wet pavement to be a pond and were injured or killed because they expected to hit water. Because the eared grebe is an aquatic bird, once it lands it cannot take off without water due to its body structure.

Dugway’s Environmental Programs Office, the Division of Wildlife Resources, and U.S. Fish and Wildlife Services officials spent Monday and Tuesday picking up and moving the grebes to water.

“We are still picking up a few here and there,” said Paula Thomas, public affairs officer for Dugway.

Officials originally thought about 5,000 birds had crash- landed, Thomas said, but after spending a few days retrieving the birds and moving them to nearby bodies of water, they determined there were more than twice that many.

Thomas said the total number of birds handled were 12,800. The birds that were recovered and deemed healthy enough to be released were 7,828, while about 100 birds were taken to a nearby rehabilitation facility. The number of dead birds that had to be buried was 4,972, she said.

“As far as I know the birds that were released are doing fine,” Thomas said. “Release locations have included the English Village and Carr lagoons, Fitzgerald Wildlife Preserve, Grantsville Reservoir and Skull Valley private ponds. Coordination with land owners occurred in advance of our release.”

Thomas said by now, she expects most of the released birds will have flown away, but she’s not sure they all have.

“They’ll fly when they are ready,” she said.