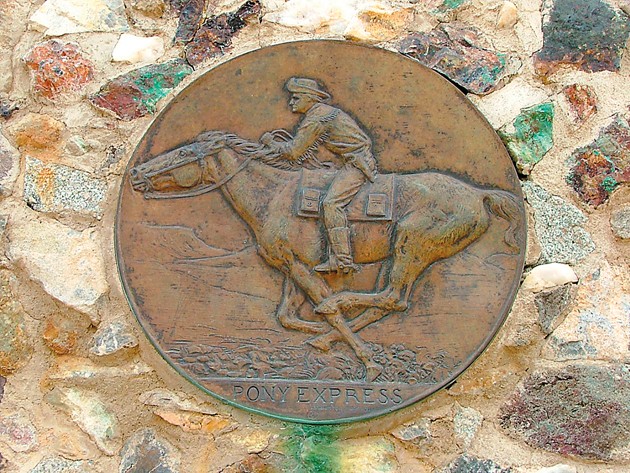 February 11, 2016
Neas carved his niche on the Pony Express

“Courage is being scared to death, and saddling up anyway.”

John Wayne is one of my family’s favorite actors, both for the individuals he always portrayed who mastered their fear in difficult situations, and for the incredible scenery that his movies were shot in.

Peter Neas was a real-life hero, too. He was full of grit and tough as nails, who often saved men and facilities in his charge as a station master for the Pony Express Trail and Overland Stage in Tooele County’s Great Salt Lake Desert.

Last week, we talked about some of his exploits at Schell Creek in White Pine County, Nevada. The country between there and Salt Lake City is just as spectacular as the landscape portrayed in John Wayne’s movies.

The adventures of Neas in today’s article occurred at the Pony Express Station known as Willow Springs. To set the stage, if you are near Willow Springs Station and look west, you will see the Deep Creek Mountains, with their forested slopes that give way to jumbled granite peaks above the tree line. The high crest of the range, between 12,080 foot-high Haystack Peak to the north, and 12,120 foot-high Ibapah Peak to the south, form an imposing backdrop for the events that unfolded in 1860-1861.

As many modern-day explorers of the county’s desert are aware, the Pony Express route passed through Tooele and Juab counties on its way to Sacramento, California. Camp Floyd bristled with activity as a third of the standing Army of the United States was stationed in Utah for the so-called “Utah or Mormon War.”

But because no conflict with the Mormons ever happened, some of the troops, especially the mounted Dragoons, were assigned to patrol the Pony Express Trail. Their job was to make sure that emigrants, stations and riders were safe from American Indians who were upset by white man’s intrusion on their land.

Willow Springs Station was in the middle of some of the most contested country on the Pony Express Trail. Men stationed there, and riders who passed through, risked their lives. Army protection for them was not always dependable.

These circumstances made perfect conditions for men’s bravery and judgment. Those who were not up to the task left their bleached bones on the land. Other men, who rose to the challenges of life and worked on the hostile frontier, became figures whose exploits and tales of courage have been told across generations.

Neas was a man who rose to the occasion and distinguished himself as a station master who was dependable and not to be trifled with. He was the station master at Willow Springs in the summer of 1860. His exploits there are well-documented and remembered. Nicholas Wilson, a local from Grantsville who was also a Pony Express rider and Army Scout, immortalized Pete and the tales of his bravery in the book “White Indian Boy.”

One event that “Uncle Nick” related goes like this: While Wilson was on his way from Schell Creek station to Deep Creek, he arrived at Deep Creek and found the next rider wasn’t there. He continued to the next station east over the mountains, which was Willow Springs.

When he arrived there he was told American Indians had killed the other rider on the desert. Wilson’s horse was worn out and he had to stop to let it recoup. Wilson would have returned later that night, but the situation would dictate otherwise.

The American Indians did not like this, and as they left, several of them shot arrows into an old cow that was milling around a shed. Neas pulled his pistols and shot two of the American Indians off their horses and then looked at the other three men at the station and said “Now boys, we will have a time of it tonight. There are about 30 of those Indians up in the canyon there, and they will be upon us as soon as it gets dark, and we shall have to fight.”

According to Wilson, a tough guy named Lynch was there and Wilson felt safe until the man broke down and started to cry, telling Neas that they should all bolt for the next station while there was still a chance.

Neas replied, “No! We will load up all the old guns that are around here and be ready for them when they come.”

Neas knew that the four men couldn’t hold the station against that number of American Indians, so he told the men to go 100 yards out in the sagebrush, space themselves about five feet apart, lay in wait and then surprise the American Indians before they reached the station. Neas gave the men a last bit of advice: “When you fire, jump to one side, so if they shoot at the blaze of your gun you will not be there”.

Wilson stated that he hid behind little humps with scrubby greasewood on them. If you have been to Callao, you will have seen this type of terrain. Wilson described a desperate fight and watched Neas shoot and then jump to one side and then shoot again. Wilson stated that he had two fully-loaded pistols, but was too terrified to shoot. He didn’t take one shot but Neas and the other men successfully protected the station.

Wilson is a great story teller and in his book “White Indian Boy,” which was first published in 1918, he paints a picture of Neas and his exploits. Neas is also mentioned in a book by Howard Driggs entitled, “The Pony Express Goes Through.”

Neas eventually left Utah and served for a time as sheriff of Alturis County, Idaho. According to Ruth Ella Neas, his granddaughter, Pete Neas rode in the 50th Jubilee in Salt Lake City and won the gold badge of honor as a station keeper. He died in 1901 and was buried in Mountain View, Alberta, where according to Dallas Torgerson, who is a direct descendant of Neas, there is a monument to this gritty Pony Express Station Master.

According to Beth Andersson, who now lives with her husband Don on the old Bagley ranch, Willow Springs name was later changed to Callao, the name of which was inspired by a sheep herder who thought the area resembled his home town in Peru. You can still visit the old Willow Springs station by appointment if you contact the Anderssons.

The old adobe hut there stirs thoughts about brave men like Neas, who walked the same ground and carved his niche out of the wilderness during the wild time of the Pony Express Trail.

How to get there: To reach Willow Springs (Callao), follow SR-36 south out of Tooele. About five miles north of Vernon, turn right onto the Pony Express Trail, and proceed west over Lookout Pass and past the restored Pony Express Trail station at Simpson Springs. Continue west over mountains, valleys and desert to Willow Springs Station. The distance from Vernon to Willow Springs (Callao) is 90 miles on gravel road. The route is remote without services. Make sure that you have a full tank of gas, a spare tire, emergency gear, and check weather and road conditions. Call the Bureau of Land Management’s Salt Lake District Office at 801-977-4300 to inquire about road conditions before departure. Roads may be impassable due to weather.