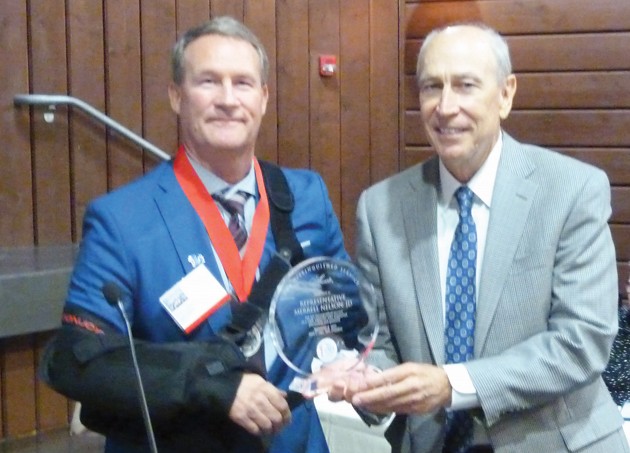 Retiring state Representative Merrill Nelson, of Grantsville,  was recognized by the Utah Medical Association during their 2022 annual meeting held at Thanksgiving Point on Sept. 9-10 for his role in the passing of House Bill 344, the Utah Medical Canor Act, during the Legislature’s 2022 general session.

The Utah Candor Act, which was sponsored by Nelson, is intended to provide a structure and procedure for open communication between patients and providers when conflicts arise over the provision of medical care. The intent is to foster resolution of legal disputes without costly and protracted litigation, according to Nelson.

The act also addresses confidentiality, disclosure, and effect of communications, materials, or information that is created for or during the medical candor process.

“Rep. Nelson sponsored and shepherded the passage of the Utah Candor Act, which was UMA’s main legislative thrust for the 2022 session,” said Mark Fotheringham, UMA vice  president. “Rep. Nelson has always been a voice of reason and vision in the House, and we recognize his amazing record of service with a UMA Distinguished Legislative Service Award.”

Nelson served in the state House of Representatives for 1991-1992. He was elected again in 2013 and announced earlier in 2022 that he would not seek another term. He currently represents House District 68, which includes all or part of Beaver, Juab, Millard, Tooele and Utah counties.