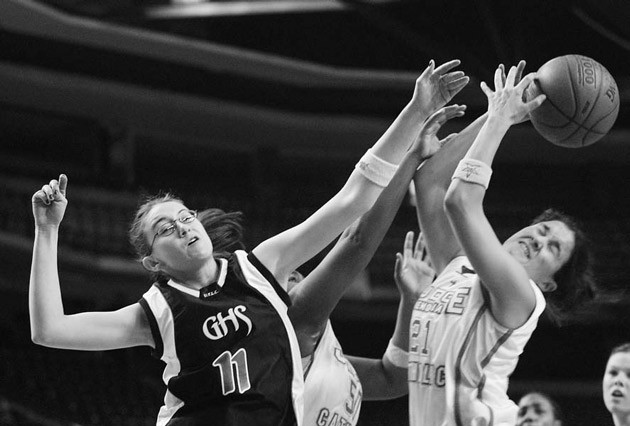 Grantsville’s Jerica Dahlberg (left) battles for a loose ball against Judge Memorial’s Danielle Valdez (right) and Alexandria Dixon (center) in Friday’s tournament game at the E-Center in West Valley City. The Cowgirls captured the victory over the Bulldogs 58-38 and placed sixth in the prestigious state tournament. photography/Troy Boman

Grantsville was a little bit nervous in the Cowgirls’ first introduction to the Class 3A Girls Basketball tournament Thursday at the E-Center in West Valley City.

And it showed against a formidable and ranked Canyon View team from beginning to end.

The Lady Falcons posted a 49-16 triumph over Grantsville in the Cowgirls’ debut of the state tournament.

However, when Grantsville came back the ensuing day, the Cowgirls had blood in their eye and eliminated Judge Memorial with complete and thorough domination.

Grantsville outscored its foe in all four frames and registered a decisive 58-38 triumph over Judge Memorial to oust the Lady Bulldogs from the state tournament Friday.

Shalane Titmus, Emmi Nelson and Jordan Chaney combined for 49 points and a smothering, pressuring full court defense vaulted the Cowgirls to a victory. Titmus pumped in a game high 17 while Chaney and Nelson fired in 16 each to spearhead the Cowgirls to a lopsided victory and eliminate the Lady Bulldogs.

The victory not only enabled Grantsville to live to play another day, it pushed the Cowgirls into the final day of competition and into a place among the Class 3A’s elite six.

And Grantsville nearly pulled off another hard fought triumph on Saturday as well.

Unfortunately, Delta captured a tough 32-30 victory over the Cowgirls in the fifth-sixth place game.

Monica Christensen poured in 11 and Karilynne Corey flipped in nine to lead the Rabbits to the slim win. Shaylee Nielson also hit for five.

Emmi Nelson led the way for the Cowgirls with 10 points while Chaney and Titmus logged six points each. Brooke Bunderson and Rachael Anderson netted four each as well.

Regardless of the setback, Grantsville still finished the 2004-05 girls hoop campaign with a stellar 17-8 record for the season and a place at state.

“I think we came out really nervous due to two factors,” he noted. “Number one, it being our first time in a state quarterfinal game in an arena like the E-Center. The second factor, was that we gave them a lot to think about and in hindsight I should have kept it a lot more vanilla because they had a lot to think about as it was. I think we stood back on our heals instead of going after it. That pace really hurt us. Give respect to Canyon View for coming out and being very prepared for our strengths and taking us out of them. They’re defense was the difference. After the game in the locker room, we decided to let it go and move on.”

The Lady Falcons took advantage of a nervous Cowgirl squad and handed the team a quarterfinal setback Thursday at the E-Center in West Valley City.

Danielle Mucci, Platt, Truman and Brandi King all hit for two points to lead Canyon View to a slim 8-2 lead after one period expired.

Chaney broke Grantsville’s scoreless string with a 12-foot jumper with 25 seconds left in the opening period.

But the Falcons reeled off nine straight points to close out the frame and build a 21-6 cushion at intermission, thanks to two field goals by Truman, a Platt 3-point bomb and King rebound basket.

Canyon View outscored Grantsville 16-5 in the third quarter when Truman hit for six points and Mucci tossed in four. Platt and King also contributed three points each and the Falcons took a 37- 11 lead into the fourth period of the game.

Chaney produced all five of the Cowgirl points in the third quarter.

The Falcons recorded a 12-5 scoring edge down the stretch to complete the game. Ashley Gentry hit for four points and King canned three charity tosses.

Titmus buried a 3-point bomb and Alexa Bakker added a 12-foot jumper to complete the scoring in the game.

A story on the two other state games will be published in future editions.

The Cowgirls ripped the visiting cords for a 21-11 outburst in the final frame of the game to put away another road victory and beat the Lady Soaring Eagles Nov. 30 in Draper.

Emmi Nelson triggered the early rally for Grantsville with six points and Jordan Chaney provided four points to help spur GHS to a slim 16-14 lead after one period. Shalane Titmus and Brooke Bunderson uncorked a 3-point bomb each.

Lindsay Padich led the way for Juan Diego with six points in the opening period while Lexi Phillips and Whitney Spooner fired in four points each.

The Lady Soaring Eagles regrouped in the second stanza to register a 18-15 scoring edge and build a slim 32-31 halftime lead. Padick ignited the Juan Diego comeback with nine points in the pivotal frame while Spooner poured in four points.

Rachael Anderson led the way for the Cowgirls in the session with six points and Chaney fired in a pair of baskets as well. Nelson and Sara Reed added a field goal each and Bunderson netted a charity toss to keep Grantsville close at intermission.

Grantsville outscored Juan Diego just 7-6 in the third quarter to knot the contest at 38-38 headed into the final period. Nelson triggered the Cowgirl comeback with six points, including a perfect four-of-four effort at the free throw line. Reed added a charity toss to tie the game up.

Jessica Smith paved the way for the Lady Soaring Eagles with four points.

However, Grantsville seized command of the contest down the stretch with the 21-11 barrage.

Titmus spurred the final assault with seven points in the final frame and Reed hit for five. Chaney and Anderson also contributed four points each and Nelson added a free throw to aid the effort. Padich produced six of the team’s 11 points in the fourth quarter.

Grantsville hit 21 of 30 free throws in the road affair.

Emmi Nelson ignited the road win with a team-high 15. Chaney tossed in 12. Anderson and Shalane Titmus contributed 10 each and even Reed was just one basket off a double figure night with eight points.