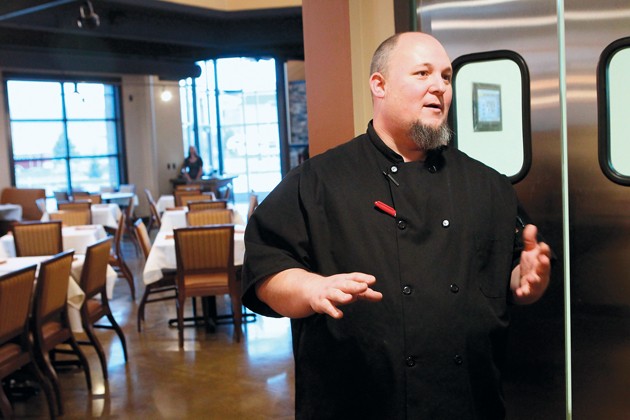 Joseph Davis, Bonneville Brewery executive chef, talks about the menu at the restaurant Monday. The restaurant is now open to the public and will have a grand opening on April 26.

It has been one year and it’s ready.

Brad Shepherd owner of All Star Fun Centers, which operates bowling alleys in Tooele, Sandy and West Jordan, purchased the former Tracks Brewery and Restaurant in March 2012 from the Applegate family.

Shepherd is betting on a complete facility makeover, a new menu, and fresh custom brewed beer to create a unique place for Tooele County residents and visitors to relax and enjoy good food and company.

Shepherd spent a year gutting the place, installing a working elevator, adding a 1,400-square foot balcony, and putting the brewery and restaurant back together.
The Bonneville Brewery Restaurant and Pub opened last Monday to the public and has a grand opening celebration scheduled for April 26.

“The entire place has been redone,” said Manager Brandon Crosby. “The lower floor is a family restaurant open to all ages and the upstairs is a bar for those 21 and over.”

Entering the front door, customers receive a warm greeting from a new fireplace. The former bar on the first floor is gone. In its place are tables and booths, with upholstered backs.

New lighting and light colored walls, along with natural light from tall windows, create a cozy but bright atmosphere for diners.

The restaurant has seating for 160 people, including a private dining room available for large groups up to 50 people.

Executive Chef Joseph Davis has created a menu that he calls American and New American cuisine.

“That means you get all the traditional American foods, but with a little twist to make them unique,” he said.

Davis started working in restaurants since he started washing dishes at 15-years old. He now has a culinary arts degree and is a Cordon Bleu certified chef.

The Utah pastrami burger comes with a hand prepared, one- third pound patty of ground beef and a generous helping of pastrami that is house cured.

The lunch menu has a $4.29 “Not so simple green salad,” which has dried cranberries, candied walnuts, and apple cider vinaigrette. Optional toppings, for additional cost, include grilled or smoked chicken, grilled shrimp, or grilled Atlantic salmon.

A variety of hand tossed pizzas are available for lunch, including a wild mushroom and gruyere pizza topped with a rocket salad for $11.79. The classic pepperoni pizza is $9.29.

The Blamb burger is a hand pattied combination of beef and lamb, with fresh herbs, feta, rocket salad, and tzatziki sauce on a Golden Grain whole wheat bun.

For fish and chips, Bonneville Brewery Restaurant serves cod, deep fried in beer batter. The beer for the batter is one of their locally brewed varieties.

Out in the brewery, brewmaster Dave Watson has been brewing eight different craft beers that have been shipped to  bar and grills at All Star Lanes locations on the Wasatch front since October 2012.

The eight beers are the only beer available at the Bonneville Brewery Restaurant and Pub.

Shepherd worked with Eric Dunlap, former owner of Red Rock Brewing in Salt Lake City, to get the brewery up and running. The boiler in the brewery, along with the refrigeration unit, needed repair work and all the plumbing had to be replaced, Shepherd said.

Watson worked with Dunlap to develop distinct recipes for the Bonneville Brewery.

Watson has been working as a brewmaster for seven years and recently worked at Desert Edge Brewery in Salt Lake City before signing on to help Shepherd revive the only local brewery in Tooele County.

The beer menu has seven standard offerings and one seasonal concoction.

The seasonal beer is currently called Redline Irish Red, hailed as the traditional beer of St. Patrick’s Day. This red ale features a bready malt character with a hint of roast.

Upstairs is a Utah state licensed club, featuring a full bar, with mixed drinks available, as well as all eight Bonneville brewed beers on tap.

The first floor is operated under a separate restaurant license.

The bar has pool tables and a large outdoor balcony, plus eight large screen televisions are scattered throughout the building.

House brewed root beer and creme soda are in the works and will be available by the grand opening.

The complete menu and more information can be found at www.facebook.com/BonnevilleBrewery.