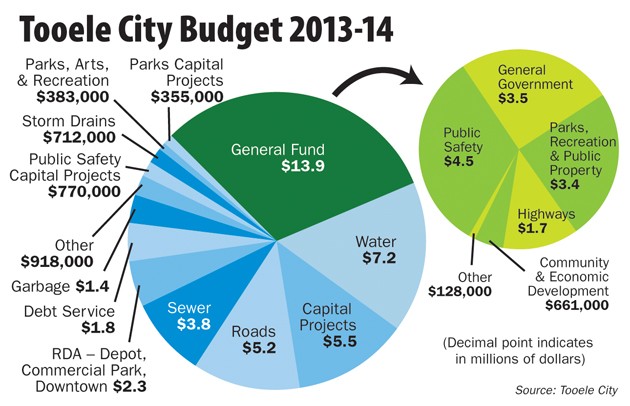 Budget holds the line on taxes and fees ♦

A $44.2 million budget that holds the line on taxes and fees has been approved by the Tooele City Council and takes effect July 1.

At last Wednesday’s council meeting, a public hearing on the city’s proposed 2013-14 budget received no comments from citizens. But Mayor Patrick Dunlavy took the opportunity to explain the new budget’s highlights to the council and audience.

“The budget has no tax increase and no increase in fees,” he said. “We have not and will not raise taxes.”

The new budget includes a 2 percent cost of living increase for employees, but none for elected officials.

Just like the preliminary budget that was proposed on June 5, the final budget includes $7.7 million in expenditures.  A project to extend Tooele Boulevard from 200 South to 700 South is part of those expenditures.

Mayor Dunlavy said yesterday the extension of Tooele Boulevard will be completed by the end of summer or early fall.

Expenditures also include giving Utah Avenue a fresh layer of asphalt from the stoplight at Main Street to the railroad tracks, and the completion of two new wells. The first well is in the Pine Canyon area and the second at the old Bit ‘n Spur rodeo grounds.

Funds for extending Tooele Boulevard include a $2.5 million grant from the Utah Department of Transportation. Class C road funds totaling $5.1 million from gasoline tax will be used to pay for new asphalt overlay on Utah Avenue, 1100 West from Vine Street to Utah Avenue, and other road improvement projects throughout the city.

Total projected general fund expenses for the next fiscal year total $13.9 million, and include $3.5 million for general government; $3.4 million for parks, recreation and public property; $4.5 million for public safety; $1.7 million for highways; $661,000 for community and economic development; and $128,000 for miscellaneous.

Total projected revenue for the next fiscal year is $19.1 million. Of that revenue, approximately $9.5 million are from sales and property taxes. The rest is from state and federal income, licenses, permits, service fees, fines and fund transfers.

Editor’s note: A story on the city’s tentative 2013-14 budget that was published on June 13 incorrectly listed the budget total at $41.9 million instead of $44.2 million. The error resulted from a misinterpretation of the city’s enterprise fund.