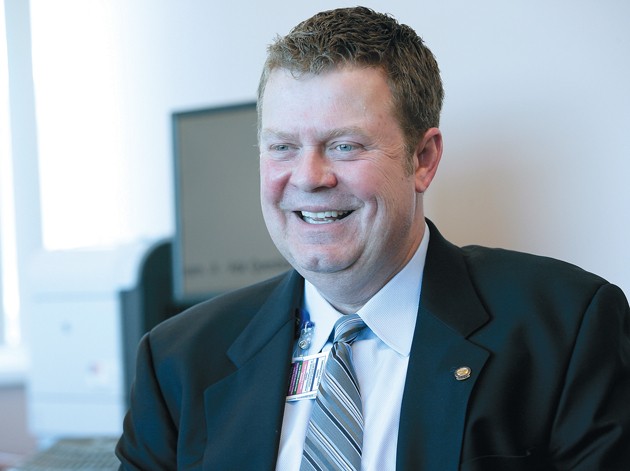 A new chief executive officer took over the helm at Mountain West Medical Center Monday and one of his top goals is to recruit more physicians to the community.

Phil Eaton, 53, took over the position from Tim Moran, who has served as interim CEO for the past eight months. The vacancy was created after CEO Kelly Duffin left last June.

Following his schooling, Eaton completed an administrative fellowship at Sarasota Memorial Hospital in Sarasota, Fla. He was there for 14 years.

“I had two kids, and when they were just reaching school-age, I decided that it might be a better environment for us to live as a family in the west,” said Eaton. “Fortunately, I got called by a recruiter and ended up in Wyoming.”

Eaton worked as the chief operations officer at Wyoming Medical Center in Casper, Wyo. for five years. He was then recruited to become the CEO at Lander Regional Hospital in Lander, Wyo. He worked there for eight years. After that, life brought him to Utah.

“Through some personal needs and life changes, I found a need to move to a more urban area,” Eaton said. “I found a wonderful wife and we’ve been married for two and a half years.”

Eaton worked as the CEO at HealthSouth Rehabilitation Hospital in Sandy for three years, and now he’s made his way to Tooele County and MWMC.

“Of all the hospital settings I’ve worked in, this is by far my favorite kind of setting,” he said. “The reason is because what I have found in my career, as I’ve worked with physicians in reaching out to communities that were underserved with physicians, there is a tremendous community benefit by recruiting more physicians.”

Eaton said this idea of recruiting more physicians to MWMC is going to be one of his main goals.

“We have some really great medical staff members already, which is a key component to recruiting new medical staff of high caliber,” he said. “The board of directors that selected me as their CEO has indicated to me that this is their No. 1 priority for the hospital and the community. We need to recruit more physicians and have a high standard of what type of physician we bring into the community. All my efforts will be focused on meeting that directive.”

In addition to recruiting physicians to the hospital, Eaton has several other goals that go along with his personal philosophies on managing. He hopes to create an environment for employees that helps them feel like they have a voice, are listened to and are supported.

“We end up with the most perfect patient care by having that kind of environment,” said Eaton. “It’s a means to an end. I’ve already begun that process. I will be having employee forums to get to know everyone as early as next week, and I will regularly attend department meetings. I will also spend time around the hospital routinely to be visible and available to all employees.”

Eaton also plans to make sure patients continue to have a high satisfaction rate at MWMC. He said the scores have been steadily climbing, but it’s something that can always be improved upon.

“This is something I will always have a focus on,” he said. “I’ll focus on the general quality of care, meeting all standards of safety, and standards of evidence-based medicine.”

Supporting the hospital’s physicians is another of Eaton’s goals. He said it’s important for physicians to have confidence that their orders will be carried out, that the hospital is a good environment for patient care, and that they can play a clinical leadership role.

Eaton’s last goal is to make sure MWMC is benefiting the community, not only by increasing the health of community in a literal sense, but also in supporting businesses, development and civic leaders.

“I’ve been given a lot of opportunities to do these things in other communities,” said Eaton. “[At MWMC,] we have a great situation that we can only improve upon. I’m the type of individual that likes to build from the positive and we have plenty of that.”

Although Eaton hasn’t moved to Tooele County yet, he said he and his wife, Shellane, are in the process of listing and selling their home in Draper. They then plan to build a home in Tooele.

“This is an ideal community for my wife and me to live in,” he said. “We’re close to family, Salt Lake and the airport. We get the benefits of the small town feel with the proximity of a great urban area along with many other things that I like to do, which are outdoor activities, like going to the mountains and fishing.”

MWMC is owned and operated by Community Health Systems, Inc., which is one of the nation’s largest operators of general acute care hospitals. The publicly traded company’s affiliates own, operate or lease 140 hospitals in 29 states, with an aggregate of approximately 20,000 licensed beds.

“I feel really fortunate coming here,” said Eaton. “It’s nice to have such a nice facility and it’s also great for me to be able to come in and work with a community board that has been so involved. I am very excited to be here in the community.”