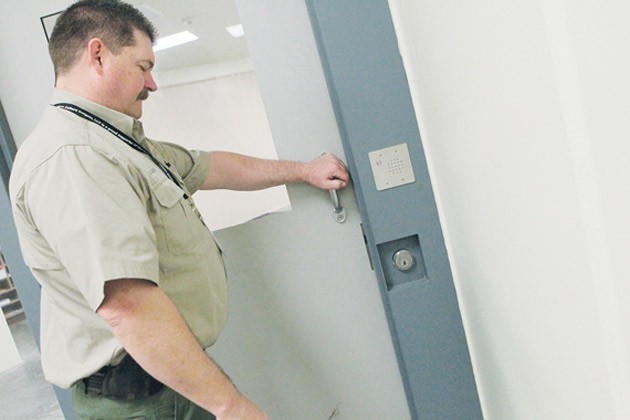 Nearly a year ago the Tooele County Detention Center opened its doors as a triumph, a shiny new facility to house local inmates and turn a profit from holding federal prisoners.

Since then Tooele County Corporation has almost crashed and burned with a $4 million budget shortage, and the $25 million jail blamed by critics as an exacerbating expense.

But Tooele County Sheriff Frank Park says the 246-bed jail, while not entirely paying for itself, has several income-generating programs, including the housing of federal prisoners.

“The jail does not, nor will it ever, pay for itself,” he said. “It’s the very nature of the facility itself. Every penny we can make, of course, goes to the bottom line.”

Last year the new detention center was paid about $80,000 for keeping inmates sentenced to prison but allowed to serve jail time in lieu of prison. It was also paid more than four times that amount for holding federal prisoners.

As of Tuesday the facility had a total population of 150 inmates, 40 of whom were federal prisoners waiting for trial, or to be moved to a federal penitentiary. Park said federal inmates started to arrive at the end of September, and numbers began to steadily climb October through December.

The jail is compensated at a daily rate, currently about $48 per inmate per day, for keeping each federal inmate. On average about 45 to 50 federal inmates are housed at a time. From September through December last year, the jail was paid $252,816 for this service.

Jail Commander Lt. David Harrison said the delay between the jail’s opening in Jan. 2012, and accepting federal prisoners nine months later, was planned so policies could be fully tested. The delay was also planned so jail staff could get accustomed to the facility before managing a larger inmate population .

“A brand-new jail, we didn’t want 200 inmates right off the bat to break in the new jail and staff, with all of the problems that were bound to come up,” he said. “I think we planned on about a year to ramp up.”

Park said the pitch to help subsidize the jail by holding federal and state prisoners — in space not used by local inmates — was initially made by World Links Group. The Colorado-based business has local ties in its founder, Tooele native Leo Mantis, who solicited a study and built the jail for the county.

The sheriff noted that the number of federal inmates held at the jail varies. It is based on how many are available, and if other federal incarceration contracts must be fulfilled first before inmates are sent to Tooele.

Because the county’s budget woes have forced all departments, including the jail, to take heavy personnel cuts, the number of inmates that can be safely kept without jeopardizing staff and other inmates is under review, noted Park.

Since the layoffs last fall, an additional three guards have left and have not been replaced, he added. There are enough guards to man posts, but not enough to walk the halls. If a fight breaks out, the staff will have to abandon their assignments to stop it.

The jail can accommodate about 150 inmates with the current number of guards and staff. In reality the number of inmates varies between 140 and 160, he said. If a sudden influx of local inmates puts those numbers into unmanageable levels, federal inmates can be returned to U.S. Marshals for transportation to another facility.

Local inmates have to be kept, no matter the number, said the sheriff, but federal inmates can be given back. Overflow prisoners from the Utah State Prison are difficult to obtain because of strict contractual terms, but such inmates, called emergency contract inmates, are occasionally available, he added. State inmates pay about $46 per inmate per day, and are not the same as the inmates sentenced to prison but allowed to serve jail time instead.

Between the belt-tightening austerity of fragile county finances, and the chronic instability of the federal inmate population, Park said asking for more guards is out of the question — for now.

“I could not in good faith go to the commissioners and ask for extra employees above what I’ve got without some kind of solidification that that’s how many [federal inmates] I’ll have,” he said. “What we do need to do is replace the people we lost since the reduction in force.”

Park said he knows that virtually every county department is working on a tight-rope thin budget. He is equally aware as to how the new jail has played in the county’s overall budget crisis. But he said he was not aware of how poorly the county was doing, and had that knowledge been more widely available, the jail project might not have gone ahead when it did.

Tooele County Commissioner Bruce Clegg said the financial state was not as dire at the time the decision was made to build the jail, and the commission had also been told that federal prisoners were widely available and that their fees would make up the cost to build a large, new facility by World Links Group.

“There was a lot of communication and optimism on what could be acocmplished and what could be collected, and a lot of optimism of being able to fill all the beds at the time,” Clegg said. “They [World Links Group] were working with the sheriff and they were representing the availabiltiy for plenty of prisoners for the beds.”

Clay McCarthy, director of operations for World Links Group, said the pitch to offset costs with outside prisoner income was more an expansion of an existing idea, and that at the time of discussions, the stream of federal and state prisoners was much more heavy and steady. The drop-off in availability of paying prisoners, coupled with the staff shortage, is unfortunate, he said, but will likely not be a permenant problem.

“I think in a couple years people will look back and everything will be humming along just fine,” he said.

About the construction of the new jail, Park said, “It did come at a time when there was substantial problems with the budget, but I don’t think anyone in the sheriff’s office, including the sheriff, knew about the severity of the problems. That’s other people. That’s the auditor, the treasurer, the commissioners. The jail definitely caused problems with the county budget, but not the whole budget.”

Construction on the new detention center started in February 2011. Arguments against the $25 million in bonds to pay for the facility eventually lost to concerns of chronic overcrowding and crumbling infrastructure at the old jail.

Since the new jail opened its doors to inmates last March, the old jail has been largely vacant, used occasionally for the backdrop of a music video or film, and was used as storage in December for Toys for Tots. Portions of ceiling tiles have fallen down, and with the heating system turned off, water pipes have burst due to extreme cold.