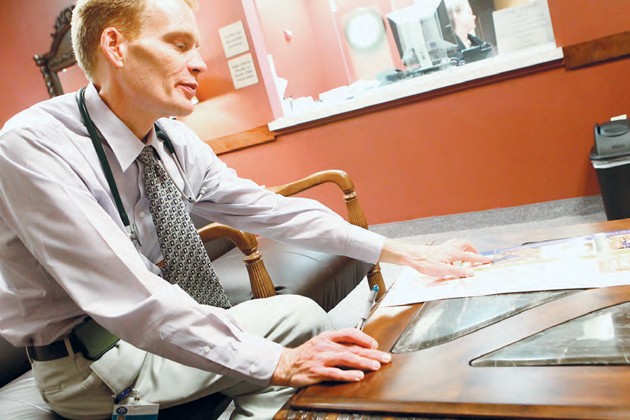 Blaine Cashmore, MD and an Oquirrh Surgical Services general surgeon, talks about the transanal hemorrhoidal dearterialization procedure that he does in Tooele now Monday morning in his office. Cashmore has performed the surgery in Tooele for about a year.

Nobody likes to talk about them, but at one time or another, nearly everyone gets them.

A new minimally invasive and practically painless surgery that eliminates hemorrhoids has recently come on the market and is being offered by a local Tooele surgeon.

Hemorrhoids are swollen blood vessels in the rectal area. Persons who suffer from them typically complain of irritation, bleeding and burning. Initial treatment includes increasing fiber intake and drinking more fluids to improve hydration. Yet sometimes more serious measures are needed to get relief.

Blaine Cashmore, MD, a general surgeon at Mountain West Medical Center’s Oquirrh Surgical Services, said a new procedure, called transanal hemorrhoidal dearterialization, has been used in Europe for around 20 years. It just recently made its way to the U.S. and helps people who are prone to getting hemorrhoids. Cashmore has been offering the surgery in Tooele for about a year, and has performed the surgery on 10 patients. Cashmore is the only surgeon in Tooele County who offers the service; only 12 other surgeons statewide offer the same procedure. “About 75 to 80 percent of people nationwide get hemorrhoids,” he said. “They are caused by sitting or standing for a long time, pregnancy and getting older, but really they can happen to anyone without any real cause.”

In the past, surgery to get rid of hemorrhoids was painful and invasive, Cashmore said. Hemorrhoids would be surgically incised, and as a result, it would take them four to six weeks to recover.

“That surgical treatment has been available for a long time, but it has been avoided by most surgeons because it is quite a painful surgery and that’s a very sensitive area,” Cashmore said. “Until this new procedure came along, we just tried to get people to live with it and avoid surgery. We asked them to do things to avoid flare ups like drinking plenty of liquids and trying to stay regular.”

Cashmore said the new procedure is a “paradigm shift” as far as hemorrhoids go.

“The surgery treats the cause instead of the result,” he said. “We all have those veins down there. The surgery diminishes and reduces the blood flow to hemorrhoids rather than cutting them out. It’s kind of like putting a dam in a river to stop the blood flow. This surgery keeps hemorrhoids from getting worse and shrinks them up.”

Cashmore said a scope with a doppler — a device that uses reflected sound waves to evaluate blood as it flows through a blood vessel — is inserted and identifies the six arteries that feed into a person’s hemorrhoids.

Next, the doctor puts a stitch into each artery to tie off the blood flow. If a person has protruding hemorrhoids, the tissue is pulled back inside by doing an accordion stitch called a pexi.

The surgery is done under general anesthesia and is completed within a half hour to 45 minutes. The recovery takes three to four days. The surgery is covered under most insurances, however, it’s not covered under Medicare. Cashmore said most people don’t have any pain during their recovery, partly due to the procedure’s minimally invasive nature.

Also lessening the pain is a new numbing medication call Exparel that came onto the market last year. The medication provides numbing for up to 72 hours. Cashmore said he expects three out of four people in Tooele County to have hemorrhoids at some point in their lives. He said about 25 percent of people will experience chronic hemorrhoids. If they do, that’s the point when they should consider surgery.

“Some people get a little flare up after a long trip or after pregnancy,” he said. “But if the hemorrhoids just don’t go away and they have persistent bleeding, itching or excess tissue, then the good thing is you can get it taken care of and the surgery is something that works well.”