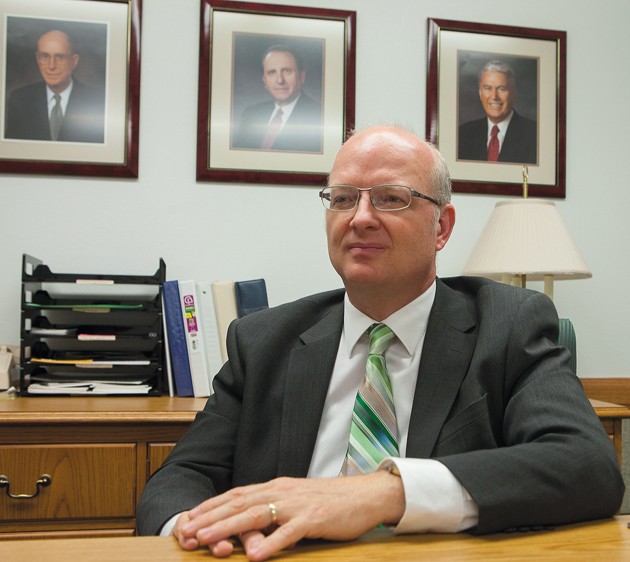 Bryant Pankratz was recently selected by officials from The Church of Jesus Christ of the Latter-day Saints to be president of the Tooele East Stake. Pankratz will serve more than 3,000 people.

A stake is a geographic area similar to a Catholic diocese, according to The Church of Jesus Christ of Latter-day Saints. The Tooele East Stake is composed of seven wards, or congregations, located in northeastern Tooele.

As the stake’s new president, Pankratz is responsible for a little more than 3,000 people. He will continue to work full-time in his career and is not paid for his church service. His two counselors, Tim Taggart and Steve Ward, were called to the stake presidency at the same time as Pankratz during a stake conference on Aug. 28.

Similarly, Taggart and Ward will volunteer their time to help Pankratz carry out his duties.

In the LDS Church, a stake presidency works with its assigned bishops, who lead each ward and help people come to Christ; authorizes men to receive the Melchizedek Priesthood; interviews future full-time missionaries and helps individuals with their questions or problems.

“If you boil it down to one thing, it’s to help people come to Christ, increase their faith in Christ and make covenants,” Pankratz said.

According to “True to the Faith,” a gospel reference published by the LDS Church in 2004, “A covenant is a sacred agreement between God and a person or group of people. … For example, you made a covenant when you were baptized.”

Pankratz made his baptismal covenant in Grantsville when he was 8 years old.

He grew up on a farm in Erda. His father, Vernon Pankratz, managed the church welfare farms there. As a child, he attended church regularly with his parents and 10 siblings. In his teenage years, he went to seminary classes.

“I read the Book of Mormon for the first time when I was probably 9 years old,” he said. “My parents brought us up in the church. We went every Sunday and we tried to do good, lead good lives. My parents are just good, hardworking people. … I think all this helped grow my testimony.”

Pankratz met his future wife, Stacey, in seminary. After graduating from Tooele High School, he served a full-time mission in Guayaquil, Ecuador, then married Stacey and started a family.

While his growing-up years serve as the foundation for his faith, Pankratz said he still has experiences that strengthen him.

“I have experiences all the time that strengthen my testimony,” he said. “Even being called as the new stake president, it’s been neat to feel God’s love for His children.”

Members of the LDS Church believe ministry leaders “must be called of God, by prophecy, and by the laying on of hands by those who are in authority, to preach the Gospel and administer in the ordinances thereof,” according to the fifth Article of Faith, written by church founder Joseph Smith, Jr.

Before calling a new stake president, the current president prepares a list of potential candidates and submits it to members of the Quorum of the Seventy assigned to his geographic area.

“The stake president sets up the interviews with the brethren, then they discuss amongst themselves and pray and talk some more, ask some questions, pray and when they feel they know who the new stake president is, they issue a call,” Pankratz said.

He was with his wife when he got the call to be the new president. After he accepted the call, Curtis and Becerra asked him and Stacey to pray and think about who to call as counselors.

At the time of Pankratz’ call to be president, he was serving as a secretary to the former stake presidency. He’s previously served as bishop of Tooele’s Eastridge Ward, but this is his first time serving as stake president.

He and his counselors are currently discussing goals to help the members of their stake, and he’s excited to get to work.

“Being a bishop was really hard. I think they’re busier than stake presidents,” he said. “When I was released, I didn’t miss that [busy-ness], but I did find I missed working and helping the people. So that’s what I’m looking forward to [as the new stake president].”