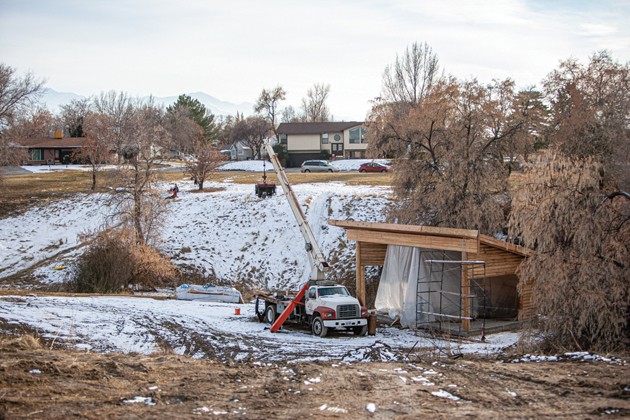 The Mill Pond Amphitheater, located near the intersection of Clubhouse Drive and Country Club Drive in Stansbury, nears completion and is set to be finished before the end of January.

Venue projected to accommodate up to 1,000 attendees ♦

Construction for a new amphitheater is currently underway at Stansbury Park’s “sled hill.”

On Nov. 7, the Stansbury Service Agency officially announced the amphitheater project via its social media page.

The amphitheater is located at the 7.12-acre Mill Pond Park at Country Club Drive and Clubhouse Drive. The amphitheater will serve as an additional amenity to the park’s current usage as the community sledding and ice-blocking hill.

Conceptualization for the project has been on the books for over a year. According to Gary Jensen, general manager of the Stansbury Service Agency, development of the project began roughly a year ago when an anonymous donor gave $10,000 toward construction efforts.

After receiving the donation and a building permit from Tooele County, the SSA began shopping around for materials. It contracted with Yellowstone Log Homes from Rigby, Idaho, and appointed Broken Arrow Inc. as the construction company.

“We went ahead procured those materials and we have [Broken Arrow Inc.}, based out of Lake Point, putting it up for us,” Jensen said, who stated that total contracting costs were at approximately $45,000.

“Oftentimes, we get donations and grants for projects like this,” Jensen said.

“We fall under the county tax base, so naturally we get a percentage for parks and recreations under capital improvements,” he said. “The SSA is a special district, which means that we are not a municipality, we are not a town, nor are we incorporated. The agency is basically tasked with general housekeeping of Stansbury, like taking care of the parks and make sure there’s a place for our children to play.”

Jensen said that the project is set for completion this month. He said that he is excited to feature this new amenity to the public, hoping that it will provide a tranquil environment for residents to come and enjoy a show or just to relax. He speculated that the venue should accommodate roughly 1,000 attendees on the natural hillside.

“We’re hoping to have this done in January,” Jensen said. “Construction started in late October when we officially broke ground and we’re looking to have it done soon. It’s a historic area that we have been working to develop for quite some time now. It’s a great venue and people have already voiced their interest and support for the project.”

Jensen said that future general maintenance for the amphitheater would fall under the responsibility of the SSA, which currently manages other recreational facilities located in Stansbury Park.

One thought on “New Stansbury amphitheater under construction on sled hill”