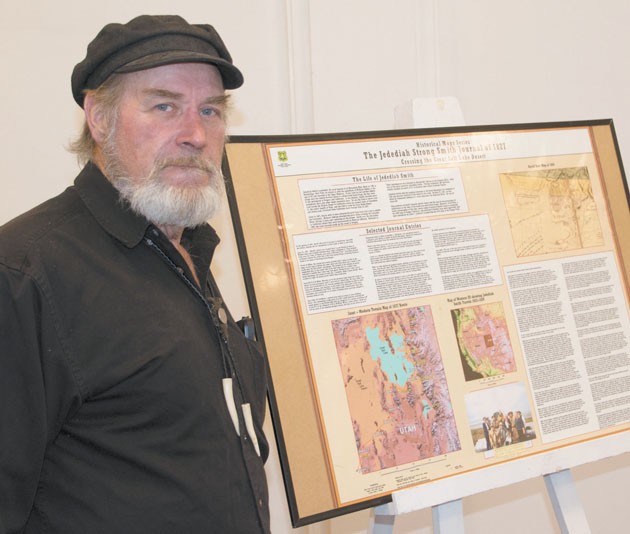 Craig Anderson, newly elected president of the Twenty Wells (Grantsville) Chapter of the Sons of Utah Pioneers, stands by one of the visual aids and photographs he shared to teach the Settlement Canyon Chapter about what happened in the Grantsville area before the pioneers arrived.

Names such as Hudspeth, Jedediah Smith, Bartleson, Bidwell, Freemont, Stansbury and Hastings left their imprint on the Grantsville area before names like Donner, Reed and the Mormon pioneers came to the area, said the president of a local heritage group.

Local historian and new President of the Sons of the Utah Pioneers (SUP) Grantsville Chapter, Craig Anderson said, the latter became better known than their earlier predecessors who paved the way for them.

Grantsville was first called “Twenty Wells” by these earlier travelers because of the abundance of water found there before the dry, deadly and disheartening march across the salt desert to the next sources of water at Pilot Peak, near modern-day Wendover.

At the June 1 dinner and SUP educational history night, Anderson told those in attendance about the hardships faced and conquered by these first white European travelers who explored the unknown parts. Local Native American Indian tribes barely scraped by in this foreboding landscape, he said. They did, however, find time to record their history in pictographs and petroglyphs. Anderson shared abundant photos.

He also discussed the native inhabitants’ pit houses and use of primitive tools made and how their cultural and spiritual factors differed from the travelers and settlers who would in essence drive them even further into the wilderness. Many audience members noted, following the presentation that they had a desire to visit and learn more of these earliest known settlers.

If one knows where to look, and Anderson has spent a lifetime searching and studying this early local history, there is truly an abundance of evidence right in our own back yards, he said.

On Saturday June 24, Anderson and others will lead SUP members on a trek into some of the very places where he discovered these artifacts — in the West Desert. The tour will also include a visit to little-remembered old mining claims, as well as natural formations.

Anderson strongly advises participants not to try accessing these places without plenty of water, spare tires and high clearance vehicles. Another helpful item is a camera since it is now against federal law to remove any aspects of Native American cultures.

Most of the early Great Salt Lake Valley explorers accessed the area through the Weber River drainage, with all its narrows and rapids, he said. The well-known Donner-Reed wagon train elected to hack their way up to Big Mountain, down Emigration Canyon and exhaust their teams making the road up and over the obstacle at the mouth of Emigration Canyon by modern day “This is the Place State Park.

“This would cost them days and days of resting their animals before making their trip around the southern end of the Great Salt Lake to modern day Grantsville where once again they rested and watered their teams before that final, fatal, foray into the desert. Some of their wagon tracks can still be seen all these years later,” he said.

Because of the party’s decision and breaking in the trail, the first Mormon Pioneers of 1847 saved countless days and exhaustion the Church of Jesus Christ of Latter-day Saints entered what would become their new home.

If you are interested in this kind of pioneer history, join the SUP the first Thursday of every month at 6:30 p.m. at the LDS Chapel on the corner of Pinehurst and Utah Avenues in Tooele. The one exception to this location will be on Thursday, July 6, when we will meet at the Settlement Canyon Pavilion to enjoy a catered dinner and special Independence Day presentation by Mike Johnson, honoring the founders of this great nation.