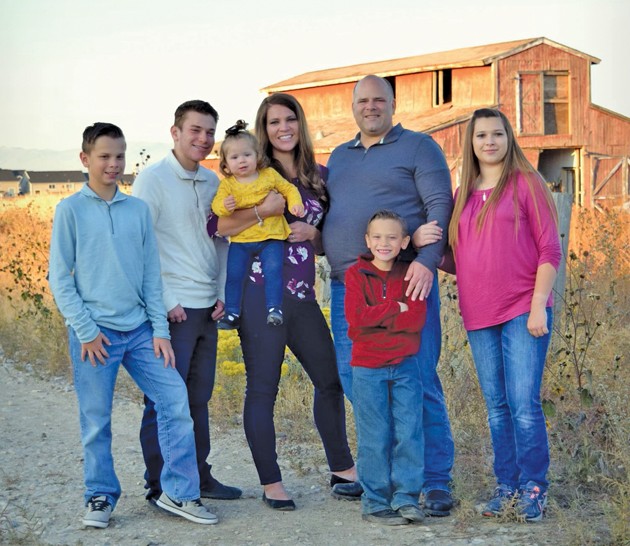 As Barrett Willson walked home after being cut from the basketball team his sophomore year at Jordan High, he suddenly remembered that he had promised the wrestling coach that he would come out for wrestling if basketball didn’t work out. Willson, who had already completed two seasons with the Beetdiggers on the gridiron, turned around and headed back to begin his life as a wrestler. For three years he battled on the mat and learned the ins and outs of wrestling, and now, this season, Willson begins his life as the new Tooele High boy’ wrestling coach.

Willson is excited to start building a legacy at THS. “I am excited to come into this program, build on the good that is here and work to make it into our own,” Willson explained. “I want to help the kids realize that building a program at THS isn’t just about this next match, this next year, but looking forward several years.”

“I talk to my seniors and ask them to ask themselves, ‘What will you leave behind for the kids younger than you to look up to?’” he continued. “I want the kids to be progressing, improving and moving in a positive direction.”

Willson noted that his team is working on a Tooele High Wrestler Creed. “I want the wrestlers to think about what it means to be a Tooele wrestler and the hard work involved. I want to teach them things that will help them on the mat, but also things that they can take beyond the mat, beyond high school.”

With Tooele’s move to the 5A classification, they will be competing against 32 other teams for the 5A state title in February. Before then, the Buffaloes will face tough competition in their stacked region from Uintah, the 2021 4A state champions; Payson, the 2021 5A state champions and cross-country rival Stansbury, the 2021 region champions. Cedar Valley, Hillcrest and Cottonwood will also provide competitive opportunities for THS.

“We will be tested in region matches, but it will prepare us for state,” Willson commented. “Last year we took nine wrestlers to state and had two state-placers. Senior Parker Hansen took second, and Chandler Yeck, also a senior, placed sixth. We set a goal to take 15 wrestlers to state this year, but I told the wrestlers I’d love them to prove me wrong and take 20!”

Willson is excited to have a large group of seniors to lead his team. In addition to Hansen and Yeck, Mason Flygare and Rhys Stoddard are returning state qualifiers who have wrestled all four years of high school. Ethan Gavin, Adrien Lovato, Jason Nield, Devin Rubio, Jerrik Shinkle and Hayden Smith fill out the Class of 2022 wrestlers.

“We have 42 wrestlers on the team. We have all 14 weights covered and are two deep in almost each weight. The more experienced wrestlers have been great to teach the newer athletes and work with each other,” he added. “I think this will be a big factor at the end of the season.”

“We are focused on building an entire program,” Willson detailed. “We stress that hard work can’t just be on the mat, it has to be in the classroom as well. When student-athletes are responsible in the classroom, it pays big dividends on the mat later.”

The Buffs tough early season schedule will provide them with valuable experience. They will first be tested in their opening dual as they travel to face the defending state champions, Uintah, in Vernal, on December 1. On December 9, they will travel to Stansbury for a region dual and then participate in the AK 47 Duals at Stansbury December 9-10. Tooele will debut at home on January 4 against Cottonwood after attending the Jody Warren Duals December 17-18, and two dual tournaments at Mountain Ridge on December 21 and 31.

“We will be tested right off the bat,” Willson remarked. “It will be good. I want us to be competitive every time we step on the mat. I try to teach my wrestlers to have the mentality that every match involves two people stepping on the mat willing to give their best.”

Willson will be assisted by Larry Evans, Josh Gustin and Nick Gortat. Evans and Gustin both wrestled and graduated from Grantsville High, and Gortat is very involved with Tooele Youth Football. Willson, Evans, Gustin and Gortat will all have the tremendous opportunity and challenge to coach their sons, Josh, Cael, Bram, and Xander, who are members of the team.

Although this will be the first time Willson coaches Josh in wrestling, he has been coaching his boys in Little League Football for years. Willson and his wife Shelley, have three sons and two daughters. Their family moved to Tooele this summer with plans to eventually build in Stockton. Willson comes to THS via Herriman High, where he was an assistant wrestling coach last year and has been a special education teacher for nine years. He also was an assistant cross country coach at Riverton High. Shelley Willson teaches fourth grade at Willow Elementary in Grantsville where their son Ethan is in her class. The Willsons’ oldest two children, Josh, a junior, and Kanela, a sophomore, attend Tooele High, and Ryan, a 7th grader, attends Tooele Junior High. The baby of the family, Penny, age 3, rules the roost and keeps everyone in line.

“In the end, we want our wrestling program to be known as a tough program to face, and we want to prove that THS wrestling belongs and is a force to be reckoned with!” Willson concluded.