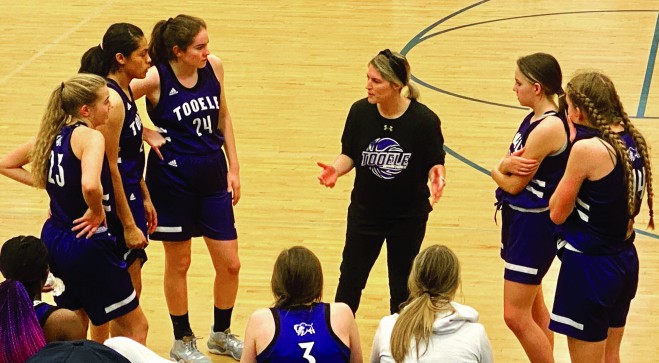 Leading the charge is new head coach Julie Bonner, who replaced long-time coach Randy Goss. As an assistant coach last year, Bonner is familiar with the team’s strategy and philosophy and already has relationships with the several players returning to the roster for next season.

“Randy is an awesome guy,” Bonner said. “The kids and parents, they really respected and valued (him); he was just a good guy.”

“He was tall and so it looked really goofy with me (at 5-foot-2-inches tall) standing next to him, but he was a huge teddy bear. He knew how to speak to the girls and be able to be that person they could literally and figuratively look up to,” she said.

Despite the winless season, Bonner said the team still played with confidence and had a positive attitude that many teams lack when things are going so poorly. In fact, Bonner suggested the girls played no differently than a winning squad.

“If you were an outsider looking in, somebody that was not part of the program, you would not have known the difference,” Bonner said.

As a recruitment manager who helps match employees with respective companies, Bonner approaches her role managing athletes in a similar manner by working with them to put their best foot forward.

“Ultimately, in high school we’re trying to help them be successful in life,” she said. “A lot of my candidates haven’t really gone through that process of understanding hard work or integrity or any of those values.”

Bonner hopes to use her role as coach to be a role model for her players and bridge the gap between being a student and an athlete.

“[As coach] I feel like it helps me understand the importance of delivering those messages and help them understand how important it is to develop character as an asset to society,” Bonner said. “I think basketball does a really good job at teaching those characteristics.”

In addition to coaching alongside Goss at Tooele High, Bonner has coaching experience at Southern Virginia University and other schools in Utah and Nevada. She is currently wrapping up a summer competitive league, which is composed of high school teams throughout the state.

Aside from high school basketball, Bonner wants to promote the sport to younger students and give them an opportunity to learn fundamentals and get experience. This past year, Tooele High School held the “Junior Buffs” basketball camp for students in first through eighth grade. Her hope is to get a “feeder” program together to create a seamless transition into high school basketball.

“A feeder program encourages youth to come out and play games, learn skills and get together and develop those athletes,” Bonner said. So when they get to ninth grade, they’ve already been playing basketball for many years.”

After the Buffaloes disappointing season, Bonner said the team was eager to join the offseason team and improve their skill set this summer.

“Most kids would say ‘Well that (season) sucked and I don’t think I’m going to do it again next year,’” Bonner said. “So, for me, the character of these girls is just incredible and to be part of that was awesome.”