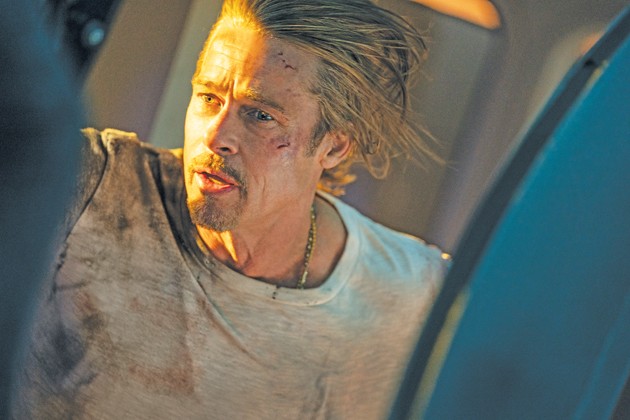 At first glance, “Bullet Train” looks like another Hollywood cash-grab conceptualized by a third grader. At the end of the day, just throw a few A-list stars into the mix and it’s bound to get produced. However, “Bullet Train” is different in that it’s an original idea that’s actually good — like really good.

Nowadays, the problem with an original movie being really good is for some reason nobody is going to watch it, so it won’t turn over a profit. That means studios will refuse other really good original ideas and we’ll be left with trite superhero movies, reboots, and remakes.

If you want to see a change in the movies being released, be that change with your dollar.

“Bullet Train” stars Brad Pitt as a professional assassin nicknamed “Ladybug,” who after switching his attitude through therapy, decides there isn’t any more room for killing in his life. However, after boarding a bullet train with the simple objective of retrieving a briefcase, he soon finds out fate has other plans for him.

Assassins from around the globe happen to be on the train and they all have connected objectives. The simple job soon becomes one of the most dangerous jobs Ladybug has ever experienced — and the one with the most bloodshed.

Filmmaker David Leitch, “Atomic Blonde” and “Deadpool 2,” adopts a Tarantino-esque style for the film with strong violence, a nonlinear perspective, incredibly witty dialogue, and interwoven storylines. It’s the most fun I’ve had in recent memory at the theater.

One of my favorite aspects is how smart the plot is.

There are innumerable plot elements brought up in the first act that tie up brilliantly at the end — some of my favorites being a subplot with a roofied water bottle and the futility of wearing a bulletproof vest because you’ll just get shot in the neck!

When the credits roll, you’ll find the film has wrapped itself in a beautiful, intricate bow.

The characters are also superb.

Brad Pitt is good in everything he is in so it’s no surprise here, but I think the true stars of the story are the secondary characters.

Notable examples include assassins Tangerine, played by Aaron Taylor-Johnson and Lemon played by Brian Tyree Henry — often referred to jointly as “the twins.” They have some of the funniest exchanges I’ve ever heard.

The only issue I had with the film was a few instances that were too far-fetched.

There is way too much destruction and carnage on the train for the other passengers not to notice, but the storytellers expect you to believe that the other passengers remain clueless. It was like everyone had blinders and noise canceling headphones on. Simply unbelievable.

The most frustrating instance was a fight that took place in a designated silent cart. A character shushes them a couple of times, but for nobody else to realize what is going on is ridiculous.

Also, at one point a character discovers the combination for a locked briefcase by going through all the numbers manually. I think that is possible, but it would’ve taken days to do, not hours or minutes.

I’ll give it an 8 out of 10. I’ll be seeing this one again in theaters. The film is rated R for strong and bloody violence, pervasive language, and brief sexuality.