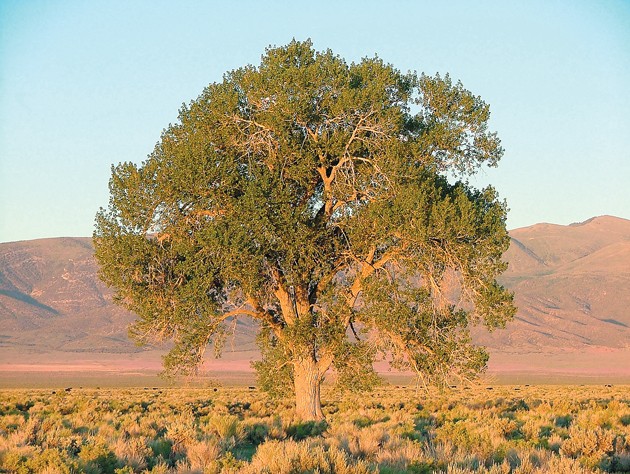 A lone cottonwood tree is illuminated in Skull Valley with the hues of the setting sun.

August 7, 2014
Night in the desert offers many surprises

One evening after work, I was cruising north on Skull Valley’s SR-196 and noticed to my right a strange, lone tree. I have looked at this tree for several decades now, and always wondered why it stands alone against one of the most bleak deserts that can be imagined.

Since I was camping in the desert that night and had lots of spare time, I decided to stop and take a closer look. After parking my vehicle, I walked over to an old fence that prevented me from getting all the way to the tree.

Standing there in the twilight, I took a few notes. The wind was still. Bird songs filled the air with chirps, whistles and clicks. There was the occasional bawl from nearby cows and I heard an old hoot owl that was sitting in the tree. There usually is lots of noise in the desert just as the sun is going down. Maybe it’s the animals’ way to celebrate another day of persecution from the sun has ended.

I turned around from the edge of the fence and admired the golden burn of the sunset on the Cedar Mountains rising out of the sagebrush ocean. Crickets chirped and a slight breeze started to stir after sunset. The desert air was filled with the aroma of rabbit brush, Mormon Tea and sage.

The old fence post I was leaning on must have been hewn out of native juniper long ago. It was bleached on one side by the sun but covered with orange lichens on the other (northern) side.

Rabbits started acting crazy — running this way and that after sundown, and the bawling and mooing of the cows picked up, too. It made me wonder what the heck they’re talking about. A crow pitched in with a relentless “Caw, caw.”

The old cottonwood was picturesque as the last rays of sun lit the cliffs pink and purple high up on Vickory Mountain in the background. Again, I wondered, why was this tree here? It didn’t make sense. But I realized I didn’t care and that I liked this place. Many would disagree and be filled with only disgust as they walked through the dry sagebrush skeletons, tumbleweeds, snake holes, cow pies and prickly pear. But to me, this place was awesome. It stood as a sample of the old west, which was beautiful and dangerous at the same time.

After sundown it was time to find a camp. I drove my vehicle back out to the main highway and headed south a mile or two. There I found a small spur dirt road that headed off into the valley. I had never checked it before, so I cruised down it for a while to an area where the sagebrush was nearly as tall as I was. There I made camp, which was simply throwing a chair out and propping the back of my truck shell open so I could see the stars all night.

By now it was around 11 p.m. and the sun was long gone. It is hard to describe the windless, pale, silvery calm of a warm summer night in the desert under a moon. As I sat there taking it all in, a large pronghorn antelope walked up the dirt road. All of the night noises had stopped. This allowed me to hear the footfalls of the antelope coming from a good distance. I wasn’t sure what it was that I heard approaching and was relieved when I realized it was an antelope.

He had no idea I was only 20 feet away from him. I could see his shiny black horns in the moonlight. He stopped nearly in front of me, scuffed his hooves, relieved himself, which I didn’t appreciate, and then walked off into the desert. After the antelope left it was once again completely silent. No crickets, birds, wind or bugs made any noise — just whispy clouds in the moonlight sky. The moon shone brightly over the low, sand hills of the valley. I could plainly see the Simpson, Sheeprock, Onaqui, Stansbury and Cedar Mountains.

So that’s how it was. I spent the night with the back of my rig propped open, and the desert and night sky on full display. And the best part: It was for free. Anyone at anytime or season can head out to the desert and enjoy the evening. Just be smart about it and take a few safety precautions, such as camping  a bit off of the main road.

Back in the day, Porter Rockwell advised to make camp and then break camp and move several miles away to throw off anyone that might be coming after you. It’s not real dangerous out in the desert, but it pays to have a wary eye.

The area described is approximately 34 miles south of Interstate 80 in Skull Valley. If areas are fenced, keep out and respect private property. Otherwise, you should be on Bureau of Land Management or state lands.

Jessop grew up exploring the mountains and deserts of Utah. He has a bachelor’s degree in Geography from the University of Utah, and has traveled to all 50 states, U.S. Territories and a dozen foreign countries. He, his wife and daughter live in Stansbury Park. Follow him on Facebook (JD Jessop) for more hikes and travels.