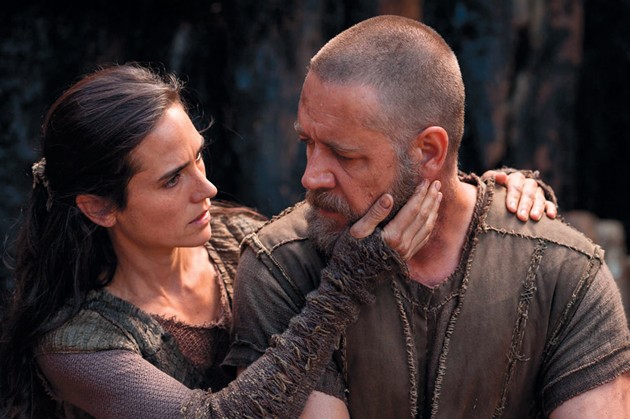 The first thing you need to know about “Noah” is that, for all the talk of “every thing that creepeth upon the earth” going “two and two unto Noah into the ark,” the animals — and the ark — aren’t all that important to the story.

In fact, there isn’t an actual real animal in the entire movie — something about somebody promising Russell Crowe that he wouldn’t have to act alongside a giraffe or something — but I’ll bet few people will notice that the zoo is as CGI as the flood.

Darren Aronofsky has taken some creative liberties with the biblical tale of a man told to preserve the earth’s plants and animals from a world-wide flood. Noah (Russell Crowe) is one of the last descendants of Seth, hunted by the hoards of descendants of Cain who are laying waste to the earth.

In a dream, Noah is shown the destruction of the world and the wicked people by The Creator, and sets off to find his grandfather, Methuselah (Anthony Hopkins), to help decipher what the dream means and what can be done to avert it.

Noah comes to realize he cannot stop the floodwaters, but he can weather them in a floating stronghold — an ark. Aided by a seed from the Garden of Eden, Noah and his family — wife Naameh (Jennifer Connelly); sons Shem (Douglas Booth), Ham (Logan Lerman) and Japheth (Leo McHugh Carroll); and Ila (Emma Watson), a girl Noah’s family rescued after her own was hunted down — undertake the decade-long project.

As the floodrains grow closer, throngs of wicked people follow the flocking birds, beasts and insects to the ark, and their leader, the murderous Tubal-cain (Ray Winstone), resolves to take the ark by force if necessary. When the waters rise, though, Noah and his family find that in many ways they are their own worst enemies as they struggle to understand The Creator’s wishes and overcome their own human frailties.

First off, this is not a Sunday School lesson. Don’t read the relevant chapters in Genesis and expect to see them played out exactly on screen. Those “creative liberties” I mentioned include, most notably, giving the early chapters of the Bible a mythical quality. There’s the light and the dark, the water and the earth, the Garden of Eden, the fall of Adam and Eve, the world’s first murder.

When Cain was banished for killing Abel, he was saved by some fallen angels, who, after disobeying The Creator’s wishes after the fall of Adam and Eve, were encased in rock and trapped on Earth.

This might be a little hard to swallow for some who went to see a faithful translation of ancient text. (I just want to mention here that Russell Crowe has been practically begging Pope Francis on Twitter to go see “Noah.” During the early mythological scenes, the thought of the pope watching these Ent-like fallen angels made me giggle.)

The personal and inter-personal struggles of the survivors during and after the flood are also not detailed in biblical verses, but they feel so human. Unlike in the Bible, only one of Noah’s three sons, Shem, has a wife; Ham and Japheth are left stag, much to Ham’s frustration. And Shem’s wife, Ila, is barren, leading Noah to believe that The Creator’s wishes are that mankind die out after saving the world’s flora and fauna.

“We broke the world. We did this,” Noah reasons. “Man did this.”

But his belief is acutely challenged when Ila conceives, threatening bonds within the family in an almost Abrahamic way. And a surviving descendent of Cain sows further unrest. There are actually a lot of fairly heavy questions brought up about morality, purpose and choices, and in that respect, the film does stay pretty religious.

In a way, “Noah” feels like two movies being played at the same time. One is an almost atheistic retelling of events told to have happened thousands of years ago like Hollywood presents the legends of Ancient Greeks or Norse, while the other is a surprisingly reverent handling of a religious text even amid the requisite big-screen drama and special effects.

That dual translation might throw off some, but for others, regardless of which of its two films they choose to see, “Noah” might be the refresher course in humanity they’ve been looking for.