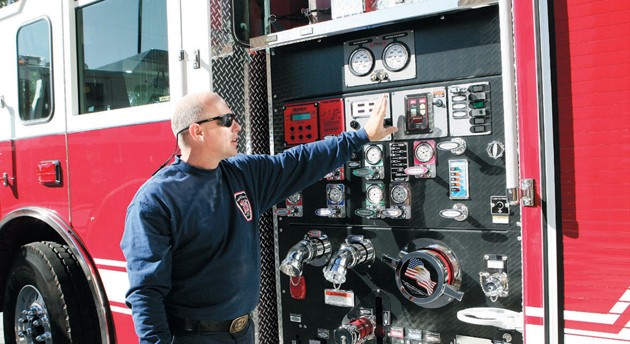 Age and ever-plaguing mechanical problems of three of the North Tooele County Fire Department’s four fullsized engines prompted the purchase, which was funded in part by a 104 percent property tax increase this year.

“We needed to make sure our guys are able to get to a fire safely,” said North Tooele County Fire Department Chief John Gollaher. “The two trucks that we are replacing can only fit two to three firefighters in the cab. These new trucks are set up to where you can transport five and have them ready to go with their self-contained breathing apparatuses on.”

Additionally, one of the 20- year-old engines has a leaking steel water tank that can’t be repaired.

“These new engines have poly tanks so they will last longer,” Gollaher said. Not only will the new status of the engines be a large perk and better able firefighters to do their job, Gollaher said because the department is leasing them for 10 years they will never wear out to the point that the old engines have.

Originally, Gollaher wanted to replace all three of his departments aging trucks, leaving only the 2002 Olympic engine unchanged, but an outcry from the surrounding community about the initial proposal to raise taxes by 149 percent caused him to rethink the purchase and cut back.

“We ended up putting a committee together — consisting of battalion chief John Stout and firefighter Kirk Arnold — to look into what kind of engines we should buy,” Gollaher said. “It took about six months because there were so many options.

Wanting to get the most out of the hard-earned taxpayer money that would be used for the purchase, Gollaher said the pair looked high and low to find the best deal that would offer the community the protection it needs.

“They did an awesome job,” Gollaher said. “We got a good bang for our buck.”