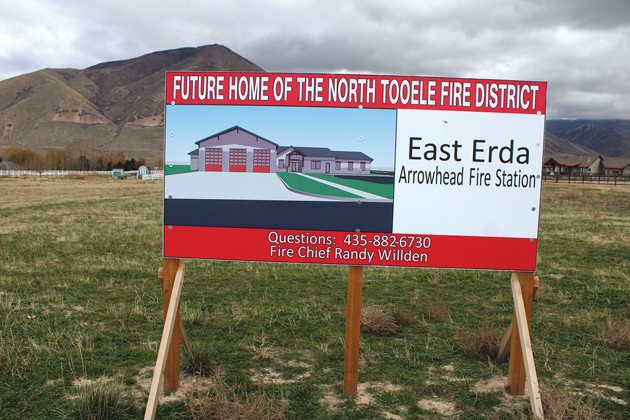 Plans for station call for operation beginning in 2025 ♦

The North Tooele Fire District has acquired land on the east side of Erda for a new fire station to reduce response time.

The story starts three years ago.  That’s when local developer Joe White contacted the fire district about building a new station on the east side of Erda between Pine Canyon and Lake Point.

“I told [White] that the property would fall right in the area where we could use another building in the future,” North Tooele Fire District Chief Randy Willden said.

So, White donated a few acres for the project, according to Willden.

Since the fire department responds to such a large area, they would like to have only a five-mile radius between each station, Willden said.

The new location is on Arrowhead Lane and Droubay Road. It is a perfect location for a new station, according to the chief.

“The new station will move firefighters closer to where new development is taking place and reduce our response times, especially on the east side of the county,” Wilden said.

Next to the property, White has built a subdivision that draws water from a well. That well can be extended to the fire district’s property, according to Wilden.

No construction start date has been determined, but the goal for completion is sometime in 2025.

In early 2022, the fire district will begin site work and work with an engineer to figure out a cost estimate.

“People will start seeing a little bit of activity on the property next year,” Wilden said.

Wilden said the station will cost millions to build.

“I’ve seen new fire stations built for a couple of a million dollars and I’ve seen $15 million stations recently,” he said. “We are looking for a nice, modest station, because it will be there for over 30 years. We want it to have room for full time firefighters and a small staff.”

The money to build the new station will come from impact fees, capital project money, and a bond, according to Willden.

“We are trying to save up money right now,” Wilden said.

The North Tooele Fire District has four locations currently, the headquarters station at 179 Country Club in Stansbury Park, one in Pine Canyon at 1753 E. 2000 North, one in Lake Point at 1540 Sunset Road and one in west Erda at 2163 W. Erda Way.

They also respond to calls for service on I-80 for nearly 60 miles to the west.

“We are excited to have a new building,” Wilden said.