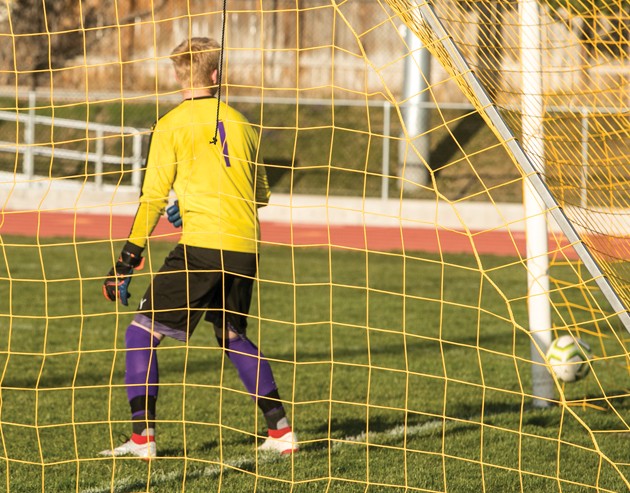 The ball sneaks over the goal line behind Tooele goalkeeper Jozef Runge for the game-winning goal in Wednesday's Region 10 boys soccer game between Uintah and Tooele at Tooele High School. The Buffaloes have suffered five losses by one goal, and Wednesday's loss came in a shootout.

April 27, 2021
Not much separates the winners and losers

To say that this season has been frustrating for the Tooele boys soccer team is an understatement, to say the least.

The Buffaloes have taken the field 14 times this season. Fourteen times, they’ve left the field on the wrong side of the scoreboard. They’ll enter the Class 4A state tournament this week perceived as mere cannon fodder for someone in the first round, having not won a match since March 11, 2020 — a 4-3 win over Cedar Valley in their last contest before the COVID-19 shutdown last spring.

But that’s not the whole story. Tooele isn’t your typical 0-14 team. There is an element of truth to the idea that you are what your record says you are, and it’s true that the Buffaloes aren’t on the level of 4A’s elite programs. But they’re literally inches away from a better fate.

Last Wednesday’s loss to Uintah is evidence. Tooele dominated the match in terms of possession. Sure, a couple mistakes found their way to the back of the net, allowing the Utes to force extra time and then a penalty-kick shootout. But Uintah’s final attempt in PKs hit the bottom of the crossbar behind goalkeeper Jozef Runge, and somehow managed to find its way over the goal line. If that ball hits the crossbar a quarter of an inch higher, it bounces straight out instead of spinning into the goal.

But that’s the way the breaks have gone for the Buffs this season. A few days earlier against Stansbury, Tooele fell behind 1-0 when a Stansbury player was initially ruled offside on an SHS goal, only to have the original call reversed to allow the goal to stand. Striker Chris Rhea was inches from tying the match, but a diving stop by Stansbury’s Devun Collins kept the Stallions in front. Dante Sylvestri’s free kick skidded along a wet field and fooled Tooele goalkeeper Deven Randle, and the Stallions tacked on a third goal on a late penalty.

Tooele has five one-goal losses in addition to last week’s shootout loss to Uintah. One of those one-goal losses is to Region 10 champion Juan Diego. Another is against Stansbury, which finished half a game ahead of Ogden for second place in the region. They lost twice to Cedar Valley by a single goal, and they fell to Ben Lomond 1-0.

The Buffs’ record isn’t pretty, but in reality, they’re two or three goals away from potentially hosting a first-round playoff game this week.

And that just proves that the line between winning and losing can be quite thin. And, who knows? A win earlier in the season might have given the Buffaloes the confidence they needed to build some momentum. They might have won a game or two outside of those six games decided by a goal or less.

But, as much as winning breeds winning, unfortunately, the opposite is also true. It can be hard to get out of a rut when things aren’t going well.

Here’s hoping that brighter days are ahead for the Buffs. It hasn’t been an easy season in 2021, but you can’t help but feel like they deserve a better fate.

Darren Vaughan is a veteran sports writer from Moab, Utah. His high school football team went 3-26 over a three-year span, so he knows a thing or two about how losing feels. Email him at dvaughan@tooeletranscript.com.