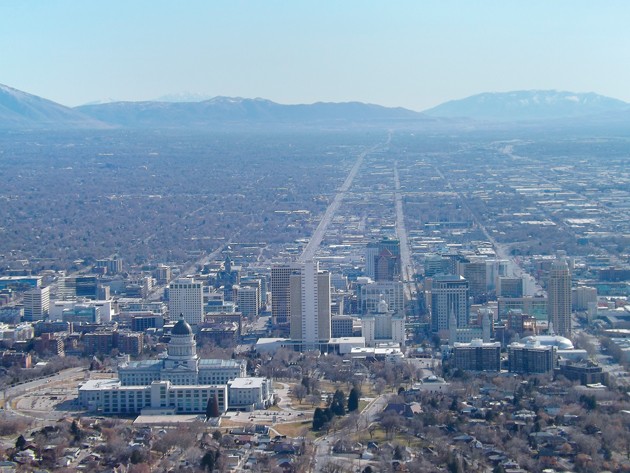 The view of Salt lake City from the summit of Ensign Peak.

March 13, 2014
Not the highest of summits, but Ensign Peak shows all of Salt Lake Valley

There is a great little hike that the entire family can enjoy almost any time of the year in Salt Lake City, and it’s only a short distance from Tooele Valley. The hike is 5,416 foot-high Ensign Peak.

While its elevation is not impressive by any stretch when compared to the towering Wasatch to the east, the peak is interesting as it is a historical and sacred place to The Church  of Jesus Christ of Latter-day Saints. It also offers incredible views of downtown Salt Lake City.

The elevation gain is only 398 feet from the trailhead to the top. The trail is also well traveled and has a good surface, which makes it an easy thing to add the hike to any itinerary when you come into the city.

One thing you will need to keep in mind is that there are no restroom facilities at the trailhead or along the trail. You also need to bring your own water — lots of it — if you hike this peak in the summertime.

Before I describe the trail, I need to explain the peak’s historical significance. On July 24, 1847, Brigham Young led 143 men, 3 women and 2 children out of the Rocky Mountains. When he laid eyes on Salt Lake Valley from the mouth of Emigration Canyon, he proclaimed “This is the Place.”

The Mormons had been run out of every community in which they had tried to live back east, and Young stated that they had finally found a place where they could live in peace and create a new Zion. Young looked upon Ensign Peak, and according to the journal of a pioneer who was with him, said “I want to go there!”

Even though he was ill, Young led a party of eight men to the summit two days after they had arrived in the valley to survey the area. Wilford Woodruff summarized the feelings of the group with, “The whole appearance was altogether better than we had anticipated or even dreamed of.”

By 1869 over 80,000 Mormon emigrants had crossed the plains and mountains to arrive at Salt Lake City. They came by oxen cart, covered wagon, walking, and many even pushed hand carts, which is something I cannot even imagine. They toiled and built their dream out of the nothingness of the Great Basin Desert in between the snow crowned Wasatch Mountains and shining Great Salt Lake.

A short hike to the top of Ensign Peak to observe what Salt Lake has become in the last 167 years is worth the effort. I often wonder what Young and the rest of his party who climbed the peak on July 26, 1847 would think if they could look down State Street beyond the Capitol now.

The Ensign Peak Trail begins at a plaza full of historical and natural history interpretive panels. There are benches and across the street down a flight of stairs is the Ensign Peak Nature Park, which makes for a nice place to sit and contemplate. From the plaza, the trail heads north through some scrubby trees and then a spur trail heads off to the left and west for about 100 yards to Vista Mound. If you only have a minute or two, this is a great option because even from this vantage point the views of downtown Salt Lake City are great.

Continuing straight on the main trail you will ascend a small bowl type valley through stands of scrub oak and open mountain grass areas. This is total foothill country, so don’t expect to see any pine trees, but keep an eye out for mule deer as this is perfect browse country for them. You may also see various birds and squirrels. I noticed a large nest in one of the scrub oak trees — probably that of a raven.

Under some of the oak canopy there are square concrete blocks that make a good spot to sit on and take a break if necessary. Some might say, “It’s not even a mile! Why a break?” I would answer: “Have you ever been hiking in the Utah foothills in July?” It can get downright hot and a break may be necessary.

After a short ways and a switchback or two, you will crest the top of the little bowl or valley you have been hiking up, and you will get your first glimpse of the Great Salt Lake and Antelope Island to the west. Imagine that you are old Jim Bridger and you are seeing this great inland sea for the first time. Better still, imagine that you are a person who lived 10,000 years ago and you are literally standing on the beach of ancient Lake Bonneville, which was more than 1,000 feet deep.

From the Great Salt Lake overlook the trail veers sharply to the south and climbs to the summit of the peak where there is a 20 foot tall rock obelisk with a historical plaque on it. The plaque reads “July 26th 1847 – two days after the Mormon Pioneers entered this valley, Brigham Young and party climbed to this point and with the aid of field glasses, made a careful survey of the mountains, canyons and streams. In the group were Heber C. Kimball, Wilford Woodruff, George A. Smith, Ezra T. Benson, Willard Richards, Albert Carrington and William Clayton.”

It is said that Wilford Woodruff proclaimed, “This is a fitting place to set up an Ensign,” and several days later, the Stars and Stripes were unfurled from the top of a tall pole set in a monument on the summit of the peak.

As I stand on the summit of Ensign Peak, 1,085 feet above Temple Square, I think about the words of Gordon B. Hinckley and the early pioneers. I look down the long straight streets and avenues of Salt Lake City that were so meticulously and carefully planned out and realize that these tough pioneers created what lies before me out of nothing.

To the east you have fine views of the University of Utah area. Just south of there the Wasatch Mountains pierce the sky in the form of bold peaks, such as 9,028 foot-high Mount Olympus, 11,330 foot-high Broads Fork Twin Peaks, and 11,150 foot-high North Thunder Mountain.

Directly in front of you is a sea of urban sprawl, specifically the Utah State Capitol, the high rise buildings of downtown and the suburbs stretching as far as you can see, lapping up against the base of the mountains like waves to the east and west.

The Oquirrhs or “Shining Mountains” hem the valley in on the west and the Great Salt Lake shines in the sun beyond the rail yards, oil refineries and airfields of Salt Lake City.

The Mormon Pioneers had a belief and a dream, and when they came down off Ensign Peak in July 1847, they turned it into a reality through hard work, perseverance and sacrifice. No matter what your religious affiliation, their accomplishment, which is on full display, is marvelous.

To get to the trailhead, make your way to the east side of the Utah State Capitol Building and follow East Capitol Boulevard up to Edgecombe or Ensign Vista Drive and then follow your nose to the Ensign Peak Nature Park and Trailhead. Take plenty of water, sunscreen and a camera, and enjoy the views.