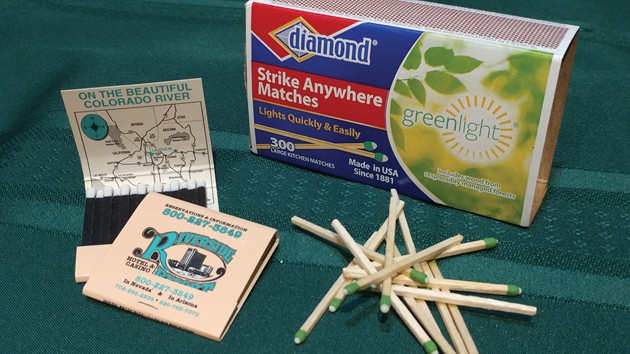 Safety matches are an economical and readily available modern convenience.

I really enjoy the time I have in the woodshop this time of year. The colder days lend themselves nicely to having the shop’s stove well fueled and a fire going throughout the day.

Whether the stove is well fueled or not, nothing happens without an ignition source. I’ve used lighters from time to time, but my “go-to” is the simple “strike-on-box” wooden match. They are readily available, inexpensive and convenient.

Before lighters and matches, fires were started by friction, coals or sparks. The bow and drill was used to create friction by rapidly spinning a rod of wood in a hole or socket. As heat was generated, tinder was placed where it gets hot enough to ignite. The burning material would then be transferred to a waiting stack of kindling. Another approach was to use flint or a steel rod to create sparks for igniting tinder. Or, if coals or smoldering materials could be retained, they could be used to light new material.

All of these methods still work, although they are a bit finicky and take some skill, especially if it’s breezy or windy. The wooden match, although not a perfect solution, extended the art of fire starting to more people and made it more convenient. I am thankful for how easy it is to get a fire going every time I head out to the workshop to get it warmed up for the day. When it’s cold, getting a flame right away is much appreciated.

The matches we are most familiar with are commonly called safety matches. This is an interesting description for an item that starts fires. This type of match was introduced in 1855. So what makes it safe?: Not spontaneously igniting as the first generation “regular” matches were prone to do. Secondarily, the compounds on the match head won’t make people sick in small amounts.

Early versions of the match primarily contained white phosphorus, which was both toxic and unstable, and would readily ignite when exposed to oxygen. The matchbook, containing safety matches, was invented in 1892, with Diamond Match Company purchasing the rights and beginning wider distribution in 1894.

Today’s safety match heads contain sulfur and an oxidizing agent — usually potassium chlorate. In addition to these two primary ingredients, powdered glass, color, fillers, and a glue and starch binder are added. This makes one half of the equation. The striking surface is the other. It is made of fine sand or glass, red phosphorus, a filler and an adhesive.

To make the magic happen, you must rapidly drag (strike) the match across the striking surface. The resulting glass-on-glass friction creates heat, and converts a small amount of the red phosphorus to white phosphorus vapor, which spontaneously lights up.

When this occurs, the sulfur starts to burn, which in turn lights the wood or paper “stick.” The match head can be thinly coated with paraffin wax to help assure that the flame spreads to the stick. The stick has been immersed in an ammonium phosphate solution to help reduce the duration of glow and retained heat after the flame goes out.

You’ve probably seen match heads in different colors. The most that I’ve seen are either white or red. These are not the actual colors of the chemicals. In the case of red coloration, this is an intuitive visual cue that it’s the end that catches on fire.

As for wood matches, the stick must be made out of straight-grained wood that will easily ignite and burn well, but not too rapidly. White pine or aspen are commonly used. Because of the significant amount of lumber that is used for this product, match manufacturers have become conscientious about using sustainable sources of timber. While a box or two of matches doesn’t look like much wood, multiply that by the amount of boxes in households around the world and it adds up.

Let’s not forget “strike anywhere” matches. How do they work? This type of match ignites if it is rubbed rapidly across any dry, somewhat abrasive surface. I’ve lit these types of matches on brick or block, as well as surfaces of rocks and surfaced lumber. They are very handy, and in wide use, but aren’t quite as safe as true safety matches. They work by having all of the necessary ingredients required to ignite from friction.

Because matches must be dry to burn, they must be kept out of rain or highly humid conditions to dependably perform. Outdoorsy people will tend to either keep matches in a small waterproof container, or to coat them with paraffin to keep them protected but usable with a minimum of fuss.

Matches come in various types, including small box matches, as well as long fireplace and barbeque starters. Of course, let’s not forget the matchbook, which contains small paper stem matches with a cover to help protect accidental lighting of the entire book. The phrase “close cover before striking” is well known to an entire generation of Americans due to this common item that also doubled as one of the most popular promotion and advertising specialties to come along.

Match sales are much lower than they used to be, due to competition from lighters and electronic ignition devices (“sparkers”) to light barbeques, furnaces, gas stoves and heaters. Even with matches being used less, the matchbook is still counted on by scores of businesses to get the word out about their location and product line. For this reason, the paper matchbook is the most common type of match produced today.

I suspect that even with other types of ignition being more commonplace, the match will continue to stay with us. My preference is to use a wooden match over a lighter. Call me quirky, but it feels more like the “real thing” for me, simple and dependable. And, it still feels like magic to see that flame ignite and get that fire in the woodstove going when the chill sets in.