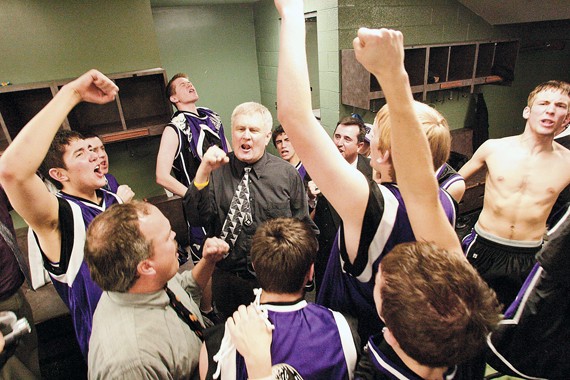 Gary Alverson celebrates with his team after winning the state championship in 2005. Alverson’s underdog story from the 2005 season is just one example of the excitement basketball brings.

I’ve been happy the past 16 days and not because of eating turkey, shopping on Black Friday or even listening to Christmas music on 98.7.

My winters at Snow Canyon High School were spent in the pep band cheering enthusiastically and playing the bass drum loudly for our Snow Canyon Warrior basketball team. Basketball has always been the easiest sport for me to watch because it’s not overly complicated and it’s a fast-paced, anything-you-can-do-I-can-do-better kind of sport.

High school basketball takes the tempo to the next level because it’s eight minutes shorter than college basketball with no commercial breaks. May the team with slightly less turnovers in a 32-minute sprint win.

So during the past three weeks of covering high school basketball, I’ve tried to cover as many games as I can, even sneaking down to Saratoga Springs to see the Tooele Buffaloes battle the Westlake Thunder.

High school basketball, especially at the 3A level, can sometimes be a little ugly. It can get so ugly that the final scores start looking like football scores rather than basketball scores, but those small gyms can generate some fantastic environments if the student sections really get into the action.

I covered the Grantsville boys on Friday, and even though the Cowboys lost that game to an athletic Hunter team that should have dominated them in every way, they fought and scraped to make the game interesting. That game was the perfect example of a 32-minute sprint. Look out for those Grantsville boys because they could be one of the intriguing stories to follow once the playoffs roll around in February.

While covering the Tooele girls team on opening night, I looked up into the rafters of the gymnasium to see the Tooele boys state championship banner from the 2005 team. That team, of course, was coached by the late Gary Alverson, who died Feb. 7, 2006. I was a senior in high school when he led the Tooele Buffaloes on an improbable run through the state tournament to win it all. I was sitting courtside as a member of the Snow Canyon pep band when Tooele defeated the Warriors in the semifinals in just one of Tooele’s upsets in that tournament.

I didn’t know Alverson’s story before that game, but as soon as the Buffs won it all I read all about him. Of course, Alverson never missed a game despite going through chemotherapy — which I still think is the greatest sports story I’ve ever heard. As much as I was screaming at the referees during that game against the Buffaloes, as soon as they completed the upset over my Warriors I became an instant fan. I rooted for them to defeat Wasatch next. I’m still stunned that a team with no size like that Tooele squad was able to shut down our 6-foot-8-inch juggernaut Coby Leavitt, but Tooele pulled it off. And the next night Tooele won it all.

I was talking with a friend who went to Morgan High School and graduated in 2005 like I did. We both agree that there were three teams in that tournament that could have beaten any team, in any class, in Utah. Those teams were Morgan, who entered the tournament with an unbeaten record, Snow Canyon, the closest thing the state of Utah had to the Showtime Lakers, and Wasatch, a team with so much size that it was scary.

Yet it was the perfect underdog story that prevailed, not the tournament’s big boys.

High school basketball can deliver some magical stories, and I’m fortunate to have six teams in the area to cover. Hopefully come February we’ll have teams that we can report on at the state tournament in Ogden.