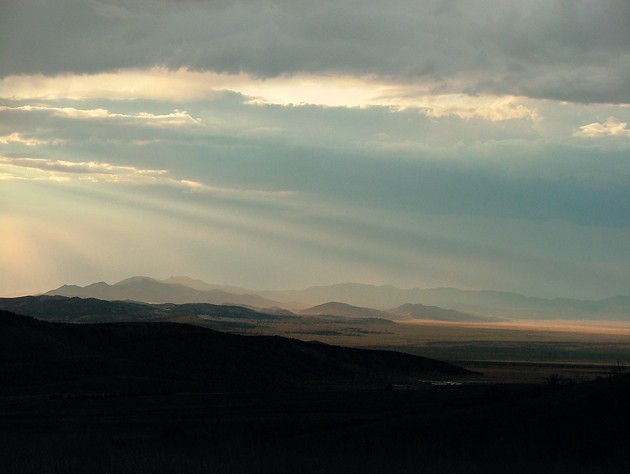 The view looking north from the west bench of the Onaqui Range near the Pony Express Trail just after the rain last week.

August 28, 2014
Now is the time to explore the Great American Desert

The “Great American Desert” is what Utah’s West Desert or the Great Salt Lake Desert was called back in the time of the Pony Express. Now that we are beginning to feel the first chill in the air of autumn, and the sunflowers are lining the back roads swaying in the breeze, it is a great time to explore this unique desert.

The boundaries of this region are roughly the Raft River and Grouse Creek ranges in the north, the Great Salt Lake and the Stansbury, Onaqui and Sheeprock Ranges in the east, the Simpson, Keg, Thomas and Fish Springs Ranges in the south, and the mighty Deep Creek Range of Utah and the Toano and Pilot Ranges of Nevada in the west.

The Great American Desert, for the most part, was frightening yet romantic to the people back east and those contemplating to cross it. Their imaginations were fired by reports written by Jedidiah Smith, John C. Fremont, Langsford Hastings, Edward Beckwith, and others who had crossed it at the height of its mystique. The reality, as men like Howard Stansbury, Howard Egan, James H. Simpson, Sir Richard Burton, Horace Greeley, Mark Twain and others would discover was a bitter, barren and even deadly desert wilderness where you constantly had to be on guard against Indian attack. You also had to carefully plan your route, taking advantage of scarce water and scant grass for livestock.

Average precipitation in the Great American Desert is 8-12 inches per year, locally less, with most of this precipitation falling in the winter as snow. Summers are hot and dry with temperatures often soaring above 100 degrees. Winters are severe and extremely cold with the possibility of heavy snow at any time.

There were more than Indians to fear out on the desert and in the mountains. There were ordinary bandits, bushwhackers and dry gulchers waiting for their chance at an easy profit gained by attacking, murdering and looting emigrants as they crossed the desert. There were also “Danites” or “Destroying Angels” of the Mormon Church, charged by Brigham Young with preventing the “Saints” from leaving Zion.

These white renegades, both Gentile and Mormon, would oftentimes blame their depredations and evil deeds on the Indians. From the perspective of the Goshute, Paiute and Shoshone, during the time of the Pony Express, there were constant cavalry troops from Camp Floyd that patrolled the trail, escorting Pony Express Riders, stage coaches and emigrant trains across the desert.

When the Indians got sideways of the Dragoons, entire groups or bands of them would be wiped out. The Indians did get some short measure of revenge against the soldiers in a few battles, but as in all cases of the American West, the Indians were eventually killed or rounded up and forced onto reservations, forever robbing the land of its greatest stewards, who understood nature and the desert, and how to survive better than any other.

If this desert was so dangerous, one may wonder what caused people from the east to want to emigrate west and risk such hazards while crossing it. The answer: The gold fields of California and the fertile valleys of Oregon as many people were looking for a new start. The Pony Express riders, soldiers, emigrants, stages and danites are all distant echoes in the lonely hills, just as the Goshute and Shoshone are ghosts in the juniper, canyons, and on the wind across the salt plain.

Even the mountains bear scars nearly 1,000 feet above the valleys, carved by a long gone inland sea called Lake Bonneville, which was the size of Lake Michigan and nearly as deep. Today, in this vast ghost desert, there are a few ranches that have held on in Skull Valley, Callao and Ibapah, some of which are owned by descendants of the original pioneers.

The Goshute Indians remain on two small desert reservations, one in Skull Valley and one near Ibapah at the western base of the Deep Creek Range. Interstate 80 now bisects the desert 40 miles north of the Pony Express Trail. If you head west on it, you’ll end up in San Francisco; if you head east, you’ll end up in New York City.

There is a casino town named Wendover on the edge of the salt, where thousands of people from Salt Lake City travel to each weekend to gamble. They follow roughly the same path as the Donner Party, but easily cross the dreaded desert and salt flats in a matter of hours.

In the middle of the great desert, north of the Pony Express Trail and south of Interstate 80, is a large USAF Bombing range and the U.S. Army’s Dugway Proving Ground, which together form one of the largest military complexes in the United States.

Even though it seems like there is a lot of activity in the desert today, much of it is still just as it was back in the time of the 49ers and Pony Express. Just as the pioneers, soldiers and emigrants did, a traveler in this area today must prepare and not take the journey lightly.

To this day, the Great American Desert continues to gobble up people who were unprepared or who traveled foolishly. The best way to access this area from Tooele City is to follow SR-36 south out of Tooele and almost to the town of Vernon. Just north of Vernon, follow the signs on the right for the Pony Express Trail and turn right on that road and you will be on your way.

Make sure you have plenty of water, a spare tire, food and a full tank of gas because you will need it. In the coming weeks, I will describe interesting facts and outdoor recreation opportunities that exist along the Pony Express Trail and other areas  and adventures in the Great American Desert. Until then, if you are contemplating traveling out along the Pony Express Trail into the Great American Desert, contact the BLM Salt Lake Field Office at http://www.blm.gov/ut/st/en/info/directory/salt_lake.html 801-977-4300.