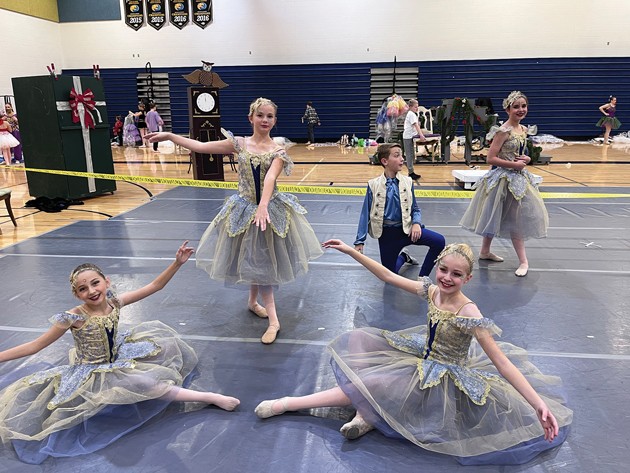 Dew Drop Fairies during a dress rehearsal of the Tooele Valley Academy of Dance’s production of the “The Nutcracker” at Clarke N. Johnsen Junior High School.

The Tooele Valley Academy of Dance has been practicing since August to bring a classic “Nutcracker” performance to the stage.

Selections from the “Nutcracker,” loosely based on E.T.A Hoffmann’s fantasy story “The Nutcracker and the Mouse King,” were first performed in 1892.

As part of their Nutcracker, TVAD has a cast of 150 dancers ranging from ages three to 60 from the dance studio and also the community.

“We’ve been performing in Tooele for over a decade and this Nutcracker is the best that we’ve ever put on the stage,” Sarah Westhora, TVAD ballet director said. “We have a phenomenal cast and it’s been so fun to work with them.”

Along with the performers, there are many individuals behind the scenes working to make the show possible.

“We have a really good team of directors, choreographers, and costume designers,” Westhora said.

The show will last around an hour and a half and will be appropriate for all ages.

“Our show will combine a lot of theater and the classical ballet repertoire,” Westhora said.

Their performance will take place Dec. 3 at 7 p.m. at the Tooele High School auditorium. The cost of admission is $5 for ages four and up. Ages three and under are free.

Tickets are available online at tvadance.org under the “shop” tab. They are also available the night of the show at the door.

“If you’re looking for a family holiday experience, this will be a rather inexpensive, delightful opportunity,” Westhora said.

The company will also perform at the Rose Wagner Performing Arts Center on Dec. 5.