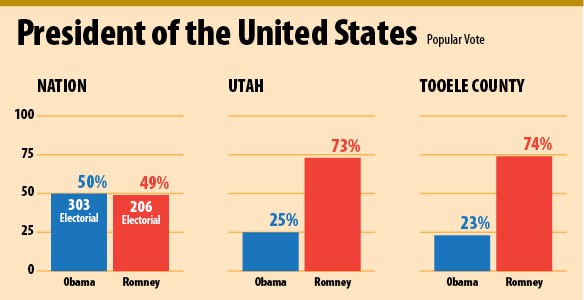 Americans said “yes” to four more years of Barack Obama as the president of the United States yesterday.

Obama won re-election by a wide margin of 303 electoral votes to Romney’s 206, with Florida being the only state too close to call by press time. The popular vote was much closer, with Obama taking 50 percent to Romney’s 49 percent, with 1 percent unaccounted for,

In an acceptance speech given from Chicago, Obama thanked his supporters and all who participated in the election, regardless of who they backed in the campaign. He also stressed the need for unification and bipartisanship in the future.

“[Romney and I] may have battled fiercely but that’s only because of our love for this country,” Obama said. “In the coming weeks I also look forward to sitting down with Gov. Romney to see where we can work together to move this great country forward.”

Romney, in a concession speech from Boston, also thanked his supporters for a hard-fought campaign, and asked them to help cultivate a bipartisan relationship with their political opposites and to support the president in leading the nation.

“This is a time of great challenges for America and I pray that the president will be successful in guiding our nation,” Romney said. “I so wish that I had been able to fulfill your hopes to lead the country in a different direction, but the country chose a different leader, so Ann and I join you to pray for him and this great nation.”

In Tooele County, Romney amassed 74 percent of the vote, with Obama bringing in 23 percent. Utahns in general voted for Romney to a slightly lesser extent. He got 73 percent of votes statewide, while Obama took 25 percent.

In a hotly contested race not influenced by Tooele County voters, the 4th Congressional District battle between Jim Matheson and Mia Love was tight up until the very end, but Matheson eked out a victory with 49 percent of the vote to Love’s 48 percent — a difference of just 2,818 ballots.

Constitutional Amendment A will funnel a certain percentage — 25 percent for the first $50 million, 50 percent of the next $25 million and 75 of anything above $100 million — of tax revenue from companies extracting oil, natural gas or minerals from state lands into a permanent trust fund. The money from that tax currently goes into the state’s general fund to pay for government operations and services.

Constitutional Amendment B will give an exemption from property tax to the primary home owned by a person in the military if the person served out of state on federal active duty for at least 200 days in that year or 200 consecutive days.

John O’Donnell, chairman of the Tooele County Democrats, said he was very pleased with the presidential victory, as well as performance of local Democratic candidates, who all were defeated by an approximately two-to-one margin.

“It’s essentially a Republican state. That’s the fact of the matter,” said O’Donnell. “But I think the Democrats in Tooele work doubly hard. I’m very affirmed in my heart to work even harder to be a better representative of the Democratic platform.”