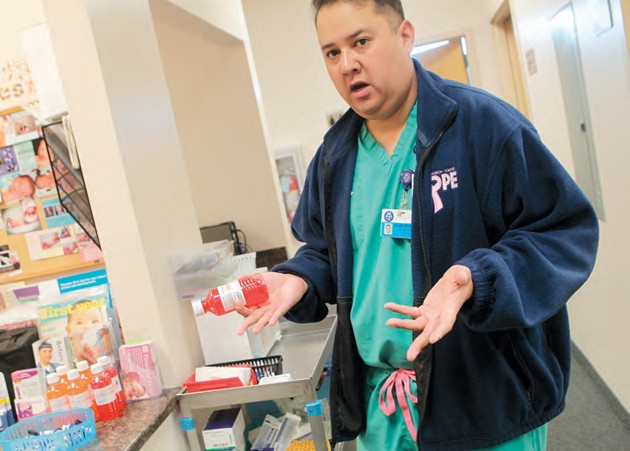 Dr. Cullen Archer holds a bottle of sugar water used in a test to determine if pregnant women have gestational diabetes at his practice, OB/GYN at All Seasons Obstetrics and Gynecology, Wednesday.

April 19, 2012
Obesity problem spreading from mothers to their babies

Tooele County’s obesity problem has been well documented, but much less attention has been paid to an ancillary battle doctors are fighting: obese mothers giving birth to obese babies.

Obese women are more susceptible to gestational diabetes or periods of hyperglycemia while pregnant. This can result in a condition called macrosomia, in which babies grow to a larger than average size before birth and are more likely to become obese themselves. Obese babies face several health risks such as developing type 2 diabetes, high blood pressure and high cholesterol at a young age.

According to the Centers for Disease Control, approximately 12.5 million children and adolescents aged 2 to 19 years old are obese in the United States. That number has tripled since 1980.

Dr. Eldad Vered, an obstetrician/gynecologist who owns his own practice, HealthCare for Women in Tooele, said he sees more obese mothers locally than in other areas he’s worked in such as Phoenix.

Vered said obese women often have larger than average babies, but he doesn’t think this comes from an insulin reaction or the fact that overweight women produce more insulin.

“They actually may not produce enough insulin,” he said. “Women have transient periods of time when they have hyperglycemia, like when they eat a high-calorie meal.”

Vered said when pregnant women have these periods of hyperglycemia, or high glucose in the blood, their body produces more insulin, but most of the time the baby is resistant to it. The baby’s body then attempts to dilute the high level of glucose in its blood by drawing water out of its cells and into the bloodstream in an effort to dilute the sugar and excrete it in the urine.

“You can have a Michelin baby because of too many of those periods of hyperglycemia,” Vered said.

Vered said a mother can contribute to her baby’s obesity even by eating too large of a plate of fruit or drinking a cup of juice or soda.

“They can have a brief period of time, maybe 15 or 20 minutes of their blood sugar going high, but if they aren’t able to reduce it fast enough, the baby feeds on the blood sugar and packs the weight on,” Vered said.

Kori Hunt, registered nurse at HealthCare for Women, said on the other hand, if a mother has a high amount of blood sugar, the baby, instead of being resistant to insulin, will often start producing more insulin to lower the mother’s blood sugar.

“Insulin makes you grow more and that’s one of the reasons why the babies get bigger,” she said. “The glucose will go to the baby and cause the baby’s pancreas to release more insulin and that acts as a growth.”

Dr. Cullen Archer, an OB/GYN at All Seasons Obstetrics and Gynecology in Tooele, said he hasn’t noticed either an increase or decrease in the amount of obese babies being born in Tooele.

“It’s staying about the same,” he said. “From personal experiences, I’m not delivering bigger babies than I used to.”

Archer said pregnant women are asked to take a test to determine whether or not they have gestational diabetes — basically permanent hyperglycemia. The test includes drinking a sugar water solution to see how the body reacts.

“When a woman comes in to drink the sugar water solution, we give them a drink with 50 grams of sugar and an hour later we draw their blood,” Archer said. “If the concentration of sugar in the blood is 130 or higher, then 90 percent of gestational diabetes is caught.”

Archer said if a woman shows a high concentration of blood sugar during this test, then they are asked to come in for another, more exhaustive test.

Archer said large babies are typically born to women with gestational diabetes, but it’s not always the case. Some people just tend to have larger babies because of genetics. However, because most of the Tooele Valley is just above 4,000 feet, Vered said women should be having smaller babies. Babies born at higher elevations are smaller due to several different factors, including decreasing oxygen tension, increasing maternal hemoglobin concentrations and decreasing maternal plasma volume with the increasing altitude.

“If you lived in San Diego or the Midwest, you should have bigger babies, but we should have smaller babies here and we don’t,” Vered said. “The average size of a baby in America is 7 pounds, 8 ounces, but we have a lot of babies that are 8, 9 and 10 pounds.”

Vered said women who are obese, especially those who are 50 percent over their ideal weights, don’t need to gain as much weight during pregnancy. Typically, he recommends that women gain 25 to 40 pounds, but an obese woman should only gain 10 to 15 pounds.

“Even if someone is overweight and they exercise, they can be healthy and their pregnancy would be healthy,” Vered said.

Archer said women are still clear to exercise even when they are pregnant.

“They shouldn’t do anything with high-impact abdominal trauma, but walking, running or riding a bike are all fine,” he said. “They can do their usual workouts they did prior to getting pregnant.”

In addition, Archer said by changing what they eat, women can decrease the risk of getting gestational diabetes. Hunt said women need to watch their glucose intake, which means limiting the amount of fruits, refined sugars and pastas they eat.

“You can’t change your genetics, but you can change what you eat,” Archer said.