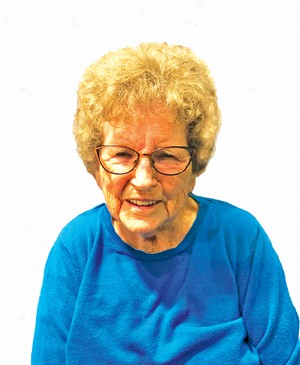 Betty Jean McClimans Garcia, our loving mother, grandmother, great-grandmother, great-great grandmother, and sister, died March 29, 2021, in Tooele from acute renal failure complicated by age. She was born Oct. 24, 1928, in Twin Falls, Idaho, to Emmett Henry and Judith Elnora Steenson. Betty was the second oldest of five siblings. Later, her father and mother divorced. Judith (Nora) later remarried. Betty now has two half-sisters from this marriage. Betty lived in Idaho on a farm. Her father raised and trained horses where she had many pleasant memories.

Betty married Wayne McClimans on Oct. 13, 1942. They had six children: three boys and three girls. They lived in Idaho and later moved to Manson, Washington. Betty was a great mother and raised her children mostly by herself. Betty had a very large garden and did a lot of canning. The garden was the main source of food which provided meals through the winter months. Betty was also a great baker, making her own bread, cakes, and cookies. Betty made the best scones ever! When it came to preparing meals, Betty was very creative and provided wonderful memories of her dishes.

By May 1960, Betty divorced Wayne and moved to Grantsville. Later, the family moved to Salt Lake City to be near her mother. After a short stay in Salt Lake City, the family moved to Lake Point and then to Tooele. Betty lived in Tooele for more than 50 years. During this time, she met her second husband, Jose Garcia, while working at the Tooele Army Depot. They married on June 17, 1967, and she stayed married to Jose until September 2011 when Jose passed away. Betty remained a widow for the past 10 years.

Betty was a faithful member of the LDS Church. She went through the Temple in 2012 and was sealed to her late husband.

Betty loved to go on trips and to travel when she could. Trips to Redding, California, to see her son, Roy, and to Palmdale, California, to visit her sister, Barbra, were most enjoyable. Betty also organized an Alaskan cruise for the whole family. It was a super hit and very memorable for Betty as well and the family. Betty also enjoyed the great outdoors and went camping whenever possible. She especially loved to go with her sons, Rick and Ronald, and their families.

Betty will be missed by all who knew her. She had such a sweet spirit and disposition. She was a very dedicated mother and a loving person.

The family would especially like to thank and recognize Sammy, Stephanie and staff of the activities department at Rock Mountain Willow Springs Nursing Facility in Tooele for their efforts to make Betty’s stay most enjoyable. Another special thanks to Christina Bennett, the hairdresser, who was so kind and considerate to Betty. Finally, special thanks to all the aides and personnel who helped Betty during her stay at Rocky Mountain.