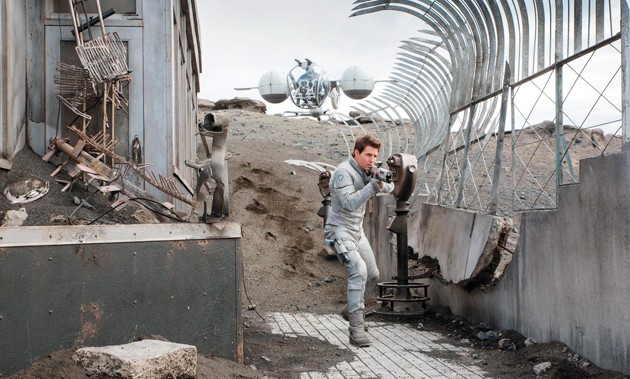 Tom Cruise, as Jack Harper, stars in “Oblivion,” which opens in theaters on Friday. courtesy of Universal Pictures

There are some thoughts I had and lessons I learned from watching “Oblivion,” but I can’t share any of them because that would ruin the whole thing.

Note to moviemakers: people are more inclined to go see a movie if they know what it’s about beforehand.

I can tell you this: It’s been 60 years since aliens destroyed the moon, which prompted humans to deploy nukes that helped them win the war but rendered Earth mostly uninhabitable. It’s also been five years since his mandatory memory wipe and subsequent assignment to Victoria (Andrea Riseborough), but things are going well for Jack Harper (Tom Cruise).

Tasked with drone maintenance and systems operations, it is Jack and Victoria’s job to make sure the hydroengines suck up ocean water to be turned into fuel for the new human settlement on Titan, Jupiter’s moon. They also must protect themselves from theft or sabotage at the hands of straggling bands of roving alien scavengers.

Sure, it gets a little lonely at times, being the only two humans left on the planet before being returned to the space ark, called the Tet, for transport to Titan. But Jack copes by bending the rules a bit — going on unauthorized trips to the surface, bringing back flowers, collecting remnants of human life before the invasion a la “The Little Mermaid.” And he and Victoria are, as they are asked daily by Sally (Melissa Leo), their commander in the Tet, an effective team.

Except Jack’s been having strange dreams, dreams of people and cities and an Earth undestroyed, dreams of a girl whom he’s never met but can’t help feeling like he loves. Those dreams are yanked into reality when he finds that girl, Julia (Olga Kurylenko), amid the rubble of a late-returning NASA ship. And when he and Julia, searching through what remains of her ship for the black box, are taken by a ramshackle bunch of surviving humans, he discovers little of the life he’s been leading for the past five years is real at all.

And that’s where giving a recap gets sticky. Even the movie’s own trailer couldn’t figure out how to keep its secrets to itself without making the tightly packed story seem vague or thin. Basically, the entire second half of the movie could pretty much be called “spoilers,” because the plot is heavily dependent on the many switchbacks it makes before we get to the final showdown of human verses alien.

Some of the twists are pretty predictable, but some were actually surprising. The whole thing kind of feels like someone took shades of “Minority Report” and “Blade Runner” (except this one, surprisingly, was not based off of anything by Philip K. Dick), and blended it with a bit of “The Island” and “2001: A Space Odyssey” for a post-apocalyptic smoothie with space exploration chunks.

Cruise is in his groove here. He is John Anderson, he is Ethan Hunt, he is Maverick. I mean, as far as things he does well, bewildered looks, glitzy-looking action scenes and long, smouldering looks top the list, so this role is great for him. Morgan Freeman is good, too, as the oldest survivor who provides us with the expository backstory. Nicholaj Coster-Waldau, a militant hesitant who welcomes Jack into their fold, gets some nice screentime, too, even if he’s forced to keep his “Game of Thrones” hair, which doesn’t really work in this context.

The world they all inhabit is heavily computer generated, from the glitz of Jack and Victoria’s home above the clouds to the lingering pieces of New York (including, yes, an obligatory glimpse of a ruined Statue of Liberty), but it does balance the obliterated, alien landscape with familiarity. It’s all pretty, and it does beg to be seen on a big screen.

Although it’s reminiscent of many other futuristic flicks, this adaptation of an unpublished comic book manages to come across as fairly original, and it’s done reasonably well. “Oblivion” is no work of art, but it’s a fun, engaging ride.