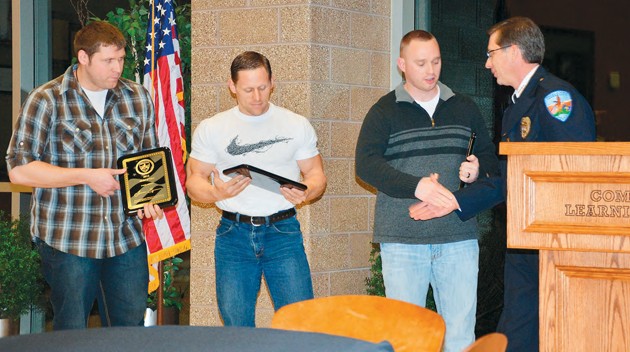 Officer Heath Hillyard was awarded the Medal of Merit for serving 15 years in the department. Det. James May, who has been with the department since 2006, was given the 2013 Chief’s Award for his contributions to law enforcement, and his positive and professional attitude.

Tooele City Police Chief Ron Kirby said May’s training as a crime scene investigator, a field in which he worked before joining the department, has improved the efficiency with which crimes are now investigated.

“He brought a new level of crime scene investigation to Tooele City that we had not had before,” said Kirby. “That’s a huge factor, what he brought to the community.”

Det. Jeremy Hansen, Officer Aaron Shepherd and Officer Jason Spencer were awarded the Medal of Valor for their efforts during a standoff with a man last April. Kirby said although the standoff ended with the man taking his own life, the actions of the officers during the incident were commendable.

“They received the award for their heroic actions during an armed confrontation,” he said. “Even though the incident didn’t turn out as we had hoped, and we’re saddened by the outcome, we still think it’s appropriate to recognize the officers for their performance, their heroic as well as professional actions, putting the well-being of another person ahead of their own safety.”

Frank and Anita Coester, Lonny Anderson and Freddy Rojas received the Citizen Service Award for their actions during an incident in which a 19-year-old man entered a home in northeast Tooele without permission last November.

When asked to leave, the man picked up a baseball bat, which he used to hit various objects as he walked from house to house in the neighborhood. At the Coester’s house, the man smashed a sliding glass door and went inside, hitting Frank Coester. Coester was able to put the man in a headlock while Anita Coester took away the bat and used it on the man as he continued to fight with her husband.

As officers arrived, Anderson and Rojas followed them into the house, and helped to hold the man down while officers arrested him. The man pleaded guilty to charges associated with the incident and is awaiting sentencing.

The nomination for the award states that the actions and bravery by the Coesters, Anderson and Rojas during the incident, directly affected the relatively peaceful outcome, and that their assistance helped ensure that there were no further injuries or possible fatalities.