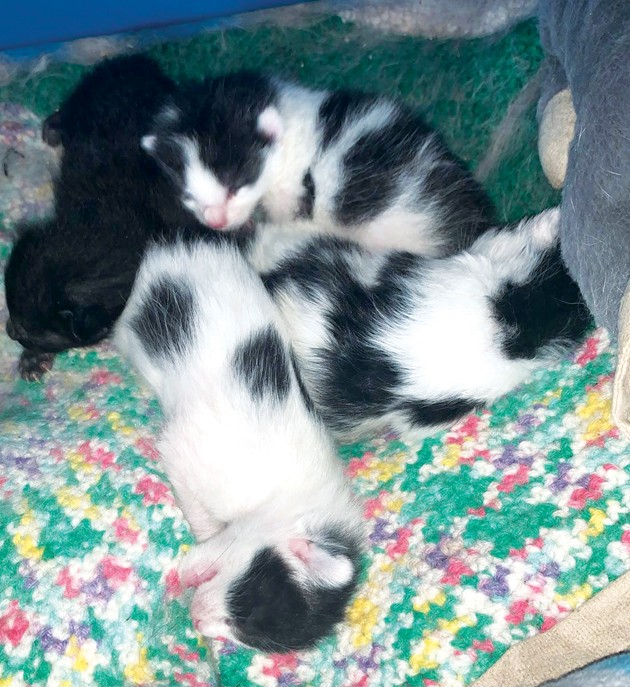 Esther’s kitties bring joy, despite the loss of one.

May 20, 2021
Oftentimes in the happiest moments of our lives, sadness will occur and that’s okay

This past week I came home from work on Thursday to check on my big, pregnant mama cat. I didn’t expect her to have had her babies that day. I don’t know why; I just really wasn’t expecting it. As I opened the door to the room Esther — that’s the mama cat — is in, I heard little noises-almost like squeaking. And sure enough, I walked over to the sideways tote with the blanket I had put in there for her and there were babies! There were three tiny, perfect black and white babies and one black baby.

I yelled for joy because I was so proud of that cat! Here she was a brand-new mother with such perfect babies! I was worried for her before, because she is a small cat that usually lives outside. My husband and I have been meaning to get her fixed but we never got around to it, so when we noticed she was pregnant, we brought her inside with plans to get her fixed and plans to give the babies to a rescue. We decided to make the best of Esther’s stay in our house and fixed up a room for her to be alone with her babies when she eventually had them.

Finally, after noticing the babies, my excitement wore down to just plain happiness. It was so cute to see the babies cuddling up, squirming around, and squealing for their mama. After a minute Esther got up and walked out of the tote so I could pet her and tell her good job, naturally, — cats love recognition. As I was petting her, I noticed something weird in the corner of the tote where Esther was laying and after a few seconds it registered.

I stopped petting Esther and crouched down to get a closer look. Sure enough, there was a tinier than the rest-little black baby that was dead — a fifth cat and Esther had been laying on top of him — maybe trying to protect his lifeless body. I noticed that he was so stiff and looked like he had been dead for a little bit.

I immediately was so sad! Oh, how fast my emotions went from overjoyed to sad so fast!

“How could this have happened?” I asked myself. “Why wasn’t I here when she was having her babies?”

A few minutes after allowing myself to just revel there in my sadness for the poor mama cat who had lost her baby, the poor baby who had died, and myself — I calmed down a little bit.

Turns out, sometimes kittens die in the womb and they are born dead or they aren’t strong enough to survive, so the mama cat doesn’t help them during birth. This is awful, but it’s a fact of nature I suppose. I probably couldn’t have done anything. He was too small.

That night I waited for my husband to get home to bury him. We dug a small hole in the ground in our yard, buried him, and had a little funeral. My husband who is not much of a crier in these situations even had a tear in his eye — I swear.

I painted “Junior” on a rock and we put it on top of the grave with some lilacs to remember the baby by. It might seem silly that we went to all of this trouble, but a life is a life.

After the Junior’s burial, I realized something. I remember how happy I was when I found the babies and even after I discovered he was dead and was sad, a part of me was still happy that there were four beautiful, healthy kittens.

This reminded me of life. Oftentimes during a really joyful time of our lives, something goes really wrong. You get married but a good friend refuses to come. You score straight A’s in all but one of your classes. You have a baby but a grandparent dies before they can see it. You win a really important award and everyone but one of your close family members will recognize your win. I could go on and on. These events in our lives can’t really be explained.

All I know is some of the most wonderful times of my life have included loss. Maybe sometimes we have to lose something to grow, or perhaps other times it’s just terrible timing. But I do believe these experiences help us appreciate the good aspects of our lives.