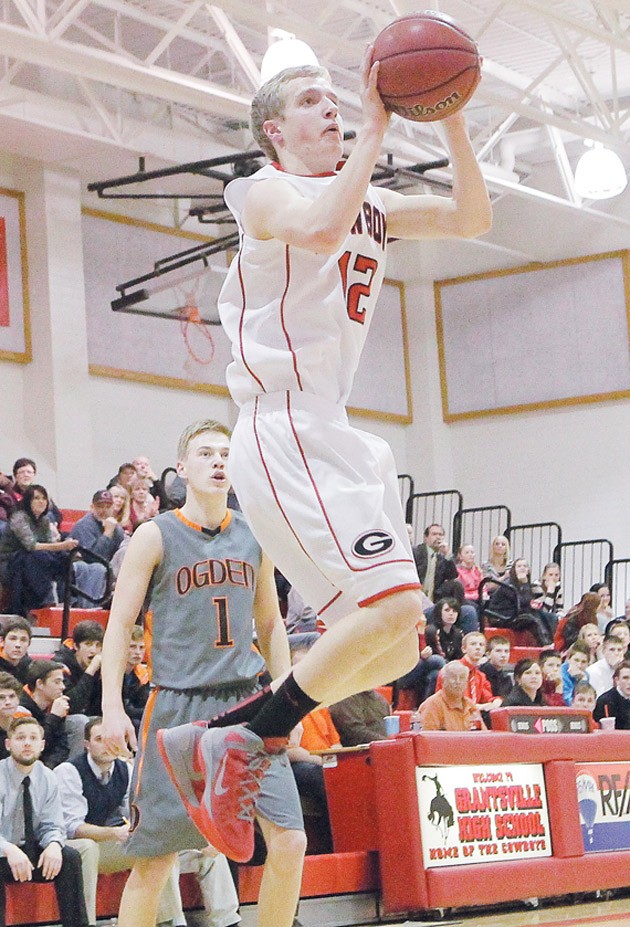 Yet another lead for the Grantsville Cowboys vanished on Wednesday when the Ogden Tigers stormed back in the second and third quarters to pull ahead with a 50-39 win and sole possession of the final region playoff spot.

“We started out really well being patient and talking on defense,” Grantsville coach Chris Baker said. “Then all of a sudden you think it’s going to be easy. We missed a ton of layups. We missed like five point-blank shots that could have put it away, and then we couldn’t bounce back from it.”

Baker reiterated a point he made in previous games when he said it comes down to wanting it more than the other team. He said it’s good to be nice kids, but at some point you have to be mean and take victories.

The Tigers opened things up after Smith gave them the lead, and it was sparked by 7 consecutive points by senior guard Dayton Wright. He put in a layup to make the score 33-30, and then at 3:38 he knocked in a 3-pointer, which was followed by two free throws 30 seconds later for 38-30. Senior center Larry Rodriguez put in a layup, which was immediately followed by Smith getting a steal and layup. The 15-1 run came to an end when Grantsville junior forward Devin Adams found junior guard Devon Arellano for a wide-open 3-pointer to make the score 42-34 in favor of the Tigers. After that the game went back and forth until the final score.

MacQueen said he had hoped some of his other players would step up and Smith would learn to be patient. He also hoped that his players would start rebounding better. The Cowboys built their early lead when these things weren’t happening, but once they started happening in the second half the game completely shifted.

“We started to get control of those two aspects — the rebounding and not forcing it to Spencer so much on offense,” MacQueen said. “We started to score more, we got better looks offensively and we ended up playing much better in the second half.”

The Cowboys opened the game with a 7-0 run thanks to a 3-pointer by Arellano, a layup by senior forward Skyler Cloward and then a spin move for a layup by Adams. The Cowboys proved they could break the Tigers’ zone defense as well through passing it around then making quick passes to the interior players. On one play in particular, Arellano had the ball at the top of the key, and he passed it off to senior guard Quinton Smith on the wing. Smith dished it back over to Arellano at the top, which he then quickly found the hole in the zone to pass to Adams in the key. Adams passed it over to senior center Landon Hammond for a layup.

Those same executed plays didn’t happen as frequently in the last three quarters.

Adams and junior center Spencer Lawrence led the team in scoring with 9 points each, and they were followed by Arellano with 6, Hammond 5, senior guard Caleb Edwards and Cloward with 4 each, and senior center Braydon Hamatake and junior forward Jake Riding each had one free throw made. Cloward led the team in rebounding with seven boards, followed by Lawrence with six boards.

Grantsville will now host Stansbury on Friday with a chance to snap its seven-game losing streak. Grantsville defeated Stansbury on the road 46-35 when the two schools met on Dec. 19.

“It’ll be a low-scoring, physical game,” Baker said. “Our kids will battle Stansbury and Tooele about as hard as they can. I think the kids will be excited to play. They always are when they go against Stansbury.”