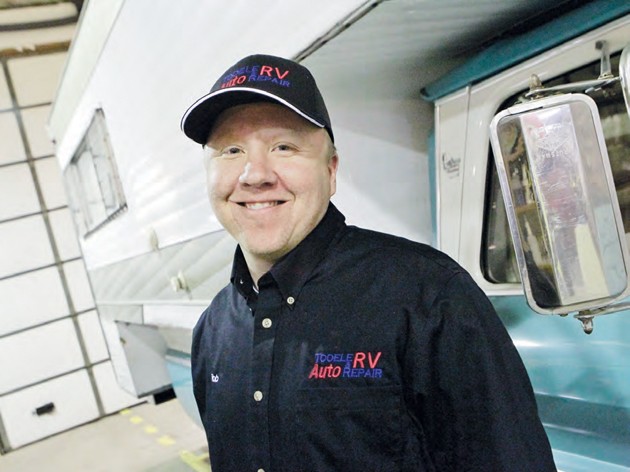 January 10, 2013
Old camper, originally made in Tooele, returns to its home roots

When Tooele resident Paul Nicholson purchased a ‘65 Chevrolet truck and Vista Liner camper from its owner in Mapleton about three weeks ago, it was because of his love for those models of trucks and the excellent condition that both were in.

However, after taking it to Tooele RV and Auto Repair for some minor repairs, he learned there was a lot more to the camper than he originally thought.

“I bought the set from a dentist in Mapleton who had a collection of cars because I love the ‘65 Chevrolet pick-up truck,” Nicholson said. “I’ve got three of them, and I love restoring them. But this one didn’t need much restoring, so I bought it.”

“It’s pretty cool that it came back to town and it’s in such good shape,” Nicholson said. “The camper was built in 1965, and as far as I know, it’s been sitting in a warehouse for about 20 years. The owner just never took it out, so it’s almost like new.”

Childs said besides its excellent condition, the camper is even more significant because the Vista Liner company, which was located behind the Post Office at 81 N. Main St., is the company that manufactured it.

The company was owned by the late Charlie Brown, a Tooele man who passed away in 2009. The campers were mass produced and sold all over the United States.

“The trailers were manufactured in high volume and were distributed throughout America,” Childs said. “A lot of people don’t know about them being a piece of Tooele heritage. If there was a museum in Tooele for this kind of stuff, it would be put into it.”

Childs said in the mid-1960s, when this camper was manufactured, campers were a new, novelty item.

“If you were to see that going down the road back then, you’d be like, ‘whoa, what is that?,” he said. “Tooele was one of the first places where these campers were manufactured at a high volume.”

The truck was not originally paired with the camper, and Nicholson said he doesn’t know when the two were joined. However, since the camper was put on the truck, they have not been separated.

“The major significance is that this is home grown,” said Childs. “It’s a piece of Tooele history that just happened to show up back at home. It captures the essence of the history of Tooele.”