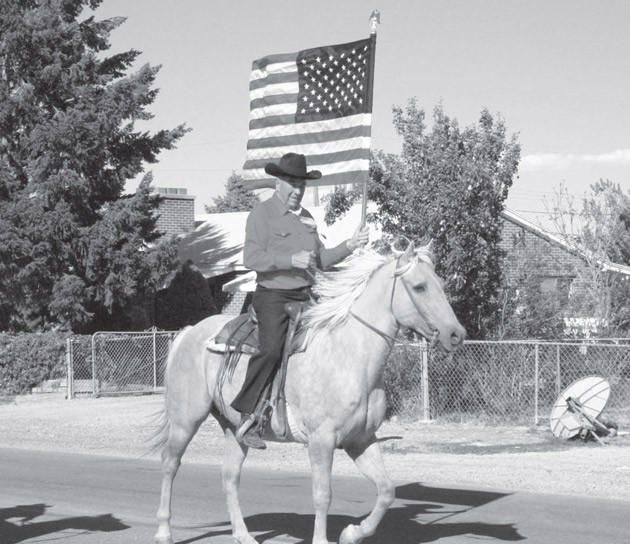 My telephone rang early Tuesday morning and I was surprised as I looked on the caller ID to see Mary Thorton’s name. The news she offered as I picked up the phone was sad.

“I just wanted to let you know,” Mary said, “that ‘our dear Cowboy Bob’ passed away this morning.”

As tears welled in my eyes, I knew that when Mary said “our dear Cowboy Bob,” she was speaking for the entire Grantsville community.

Things will never be the same without “our Cowboy Bob,” the tall, ruggedly handsome man who took time to listen and be a friend to all.

Even though Robert V. Lawrence “Cowboy Bob” was an “old-timer” who was born in 1921, he never seemed to age. Heck, he still rode his horse and carried the American flag at the front of each of Grantsville’s Fourth of July parades. Each fall, during Grantsville High School’s homecoming activities, Cowboy Bob would ride his horse along the outside perimeters of the football field to deliver the game ball to the referees. Cowboy Bob’s entrance at those games got the hometown crowd stirred up. After all, as a “real” Cowboy, he was one of the best fans the Grantsville Cowboys ever had.

An athlete himself, Cowboy Bob played on the GHS football team back when the school competed with Tooele and teams from along the Wasatch front with student bodies more than double Grantsville’s size. Cowboy Bob also played on an All Church (LDS) championship basketball team in his younger days.

Last August, Cowboy Bob called and asked if I would come to the GHS class of 1939 reunion and write a newspaper article on it. I told him that even though the reunion was being held on our newspaper production day (which means all members of the editorial staff arrive at work very early and stay until the newspaper is ready for print), that I would be happy to cover the reunion. In all honesty, I was feeling a little tired that day as I arrived at Gezal’s Restaurant, the site chosen for the reunion. But the minute I walked in, Cowboy Bob stood to greet me. He gave me a big hug and said, “Thanks for coming. I love you.”

Actually, there were lots of times when Cowboy Bob put an arm around my shoulder and said, “I love you.” It seems those moments always came when I needed them most. He somehow seemed to sense when I was feeling down or needed a self-esteem boost. It meant the world to me to know that a man I considered to be about as perfect as a person can be cared about me.

I will always be happy that I attended the GHS Class of 1939 reunion last summer.

That’s when I learned that Cowboy Bob’s favorite school teacher was Lola Jefferies. “The only time I got an ‘A’ was when I was in Miss Jefferies’ 5th-grade class,” Cowboy Bob said that afternoon. “When she got married and moved to Idaho, it broke my heart.”

Cowboy Bob shared numerous other stories that afternoon like, “During the 1938/39 GHS football season, our team made one touchdown when we played Granite High School. That was more points than the combined points scored by the Grantsville team the year before.”

Classmate Mitt Bell chimed in at that point to remind Bob that the 1938 GHS football team lost to Bingham by a score of 65-0. “And that was Bingham’s junior varsity team!” Mitt added as the smile on his face grew larger and larger.

But win or lose, Grantsville teams could always count on Cowboy Bob being on the field or court during his high school days — and later, being in the stands to proudly and loudly cheer for his alma mater. Bob was inducted into the GHS Athletic Hall of Fame some years back. And just weeks before he died, he established an endowment to fund the “Cowboy Bob Athletic Scholarship.”

Following high school graduation, Robert fulfilled a mission for The Church of Jesus Christ of Latter-day Saints in Colorado, New Mexico and Nebraska. “When I returned, my father bought a ranch in Skull Valley and we lived out there for awhile,” he said.

Robert married his sweetheart, Della Williams, on May 14, 1943 in the Salt Lake Temple. He then served in the South Pacific during World War II, where he won the Bronze Star and Combat Infantry Badge.

Cowboy Bob was employed as a firefighter at Tooele Army Depot for approximately 20 years. He also enjoyed being a fence contractor, bus driver for GHS athletes, a heavy equipment operator, a rancher, and of course, a cowboy.

Many a Grantsville resident will forever remember the day Cowboy Bob came to their school room to show off his rope tricks. He earned his nickname “Cowboy Bob” as several generations of kids grew up enjoying his performances.

One of Cowboy Bob’s favorite yearly traditions was to participate in the reenactment of the Pony Express mail delivery. The ride always begins in St. Joseph, Mo. and ends 10 days later in Sacramento, Calif. — a distance of 1,900 miles. Each Pony Express reenactment rider, outfitted in a red shirt, covers a two-mile stretch along the way. Cowboy Bob made his first reenactment ride in 1960. During the past several years he relished being recognized as the “oldest rider” in that event.

Cowboy Bob told me some years ago that he couldn’t remember a time in his life when he didn’t own a horse.

“My dad bought my first horse for me,” he said. “Her name was Babe and she was a Kentucky whip.”

Robert has owned several horses over the years including King’s Man and Cracker Jack. But he said if he had to choose just one as his favorite, it would Appy. “Appy was a white appaloosa that I rode in a lot of parades,” he said during an interview several years ago.

A native of Salt Lake City, Robert lived in Bountiful and Price before his parents, Victor Walton and Lovina Ann Hodgson Lawrence, moved the family to Grantsville. Bob, the oldest of eight siblings, was then in 3rd-grade. “My dad was a mechanic and he worked for a construction company that built highways [in Tooele County],” Cowboy Bob explained. “Dad built the first runway at the Wendover air base.”

When Cowboy Bob first came to Tooele County, he and his dad often chased wild horses on the desert. “There were no restrictions back then,” he said, “so we’d go out and catch the horses.” One of Cowboy Bob’s grandsons once told me his grandpa’s philosophy of life was to “think twice and act once.” That’s the way Cowboy Bob was. When he spoke, people listened because they knew he was a loving, wise and compassionate man.

Even when trouble or heartache came his way, Cowboy Bob would never let on that anything was wrong. He once told me, “God gave me these big wide shoulders so I could endure the weight that would be placed upon them.”

Robert’s many callings in his church included bishop, high councilor, financial clerk, leading the scouts, and being a faithful home teacher. Additionally, he was so respected and admired by residents of his community that they elected him to serve on the city council and to represent Grantsville on the Tooele County School Board.

It’s definitely hard to lose a man like Cowboy Bob. He truly made a difference in the life of most everyone he met. But I know beyond the shadow of a doubt that he instilled his strong morals and compassion in his children.

They will carry on their dad’s tradition of being community leaders.

It will be especially hard for Della to not have her faithful husband at her side, but she will be supported and comforted by her children, 35 grandchildren and 60 greatgrandchildren.

Even though we will all miss Cowboy Bob immensely, we can find comfort in the words he often spoke:

“Old cowboys never die,” Robert V. Lawrence would say. “They just ride off into the sunset.”

I know that somewhere in that “sunset” we will one day be reunited with “our Cowboy Bob.”