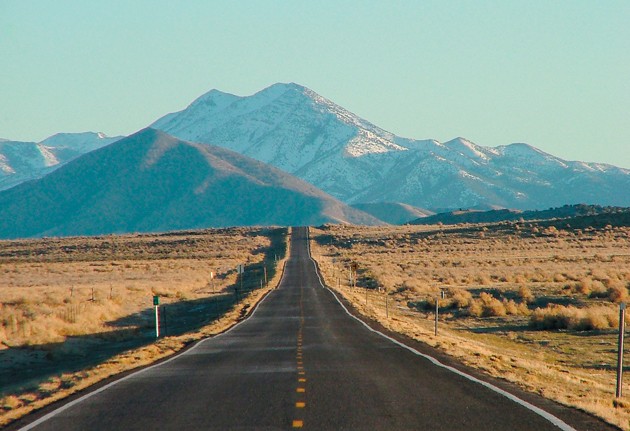 Skull Valley Road near the Lincoln Highway cutoff with Davis Mountain and the snow-capped Indian Peaks of the Simpson Range rising in the background.

On state Route 196 in Skull Valley, about seven miles north of the Dugway Proving Ground gate, the Old Lincoln Highway breaks off and heads east towards Terra and Johnson’s Pass. It is a wide open space and a great place for a walk. You will likely only see a car or two, and the view of 10,330-foot-high Vickory Peak to the east is incredible.

An amazing amount of history transpired in this part of the valley. There is not enough time to dig into all of the stories, so I’ll share a few bits that I’ve collected, things that I think about while I’m walking around out there.

First of all, if you look towards the Stansbury Range, somewhere in your field of view is likely the spot where on June 25, 1827, Jeddediah Smith and his weary companions found water at some spring. That water saved their lives after their miserable crossing of the Great Salt Lake Desert by way of the northern tip of Granite Mountain.

Secondly, in 1858 Capt. James H. Simpson made his first attempt at exploring the desert and he passed through this area after coming over what we now know as Johnson’s Pass. Simpson was the first person to name the pass and he called it “Reynolds Pass” in honor of Maj. John Fulton Reynolds, a member of Col. Steptoe’s command who first surveyed the pass for the practicability of wagon traffic.

Interestingly enough, years later in 1863, Maj. Gen. Reynolds was in operational control of the I, III and XI Corps of the Union Army at Gettysburg when he was shot and fell from his horse mortally wounded.

Capt. Simpson was a great writer and he documented his explorations well. In particular, he made note of how the track they were following out of Reynolds (Johnson’s Pass) was made in 1855 when a posse, under the command of Deputy Marshal Wall, was after Carlos Murray and his band of criminals for their suspected murder of emigrants.

Simpson stated that this posse track fell in line with Lt. Beckwith’s expedition trail on the other side of the salt at Reading Springs. Imagine being part of a posse that had to chase bandits all the way across the Great Salt Lake Desert!

Simpson, somewhere between Dugway and Simpson Springs, got into an argument about Mormonism with his guide George Bean. Simpson made some “hard remarks” against the prophet and Bean, a Mormon, purportedly told him that if he didn’t take them back, he would leave Simpson and his group in the desert. After much consternation, Simpson retracted his remarks and the party continued to Dugway Pass before cutting the mission short due to foul weather.

I took a walk in this area the other day and it was refreshing to get out there and consider all these interesting tales from the past. When I stepped out of my truck, it was ice cold. It was nearly sunset, and as always, I had my camera and began taking pictures. Without gloves, my fingers froze quickly. Other than my boots crunching on old snow, it was silent. The sagebrush was taller than it looked from the road — some of it was eye level. There were also clumps of Rabbit Brush with an occasional tumbleweed.

There was a thin white haze forming in the valley at the foot of the peaks and there was pink sky above the snow caps. This is a common occurrence in this valley for two reasons: First, the high peaks flush their cold air into the bottoms overnight and the temperatures drop low. Couple this with warm water coming out of some of the springs and thick fog banks can occur. The other reason is industrial pollution creeps down the valley from operations on the west side of the Great Salt Lake.

As I walked, I heard a coyote bawl, cackle or cry — it’s hard to describe what it sounds like — in the distance. I also spooked several large jack rabbits that waited until I was practically on them before they ran haphazardly in a crazed attempt to get away.

It’s a good place to think where you won’t be disturbed. There was a thin orange blanket of sunlight disappearing behind the Cedar Mountains to the west. The freeze-thaw cycle out here is interesting. It can get quite warm during the day, which melts the snow and causes it to consolidate around groups of sagebrush while turning the bare dirt areas to soupy muck. This stuff freezes solid at night and the cycle continues the next day. The plants, dirt and air smell good out in the desert when it’s thawing out. It reminds me of that clean, after-the-rain smell.

It was finally time to go, but I was treated to a full moon that looked amazing. One minute on the highway you are cruising at 65 mph and then you hit a fog bank and you slow down to 35 mph or slower because it is so difficult to see. Then all of a sudden you bust out of the fog and the moon and stars have the desert lit up. Words can’t really describe that event. Just be extremely careful, in fact, don’t ever be on Skull Valley Road (state Route 196) when there is fog. There could be livestock in the middle of the road in the fog.

The last thing that I thought about while I walked back to my vehicle was how Daniel Orr found Capt. John Williams Gunnison’s wagon wheel odometer while he was on a similar walk in the 1880s. This item had likely been carried up to Skull Valley after Indians massacred Gunnison and his command down on the banks of the Sevier River in 1854.

Orr believed that the Indians grew tired of it and discarded the odometer many miles away from the massacre site. Orr kept the odometer for years and then gave it to Brigham Young University where it resides to this day in a museum. What an amazing find. Such things I think about while I walk through the desert.