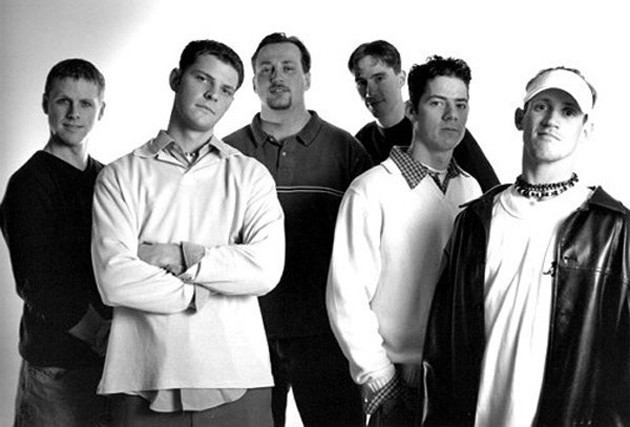 Eclipse 6, a Utah a capella group that sang during the opening ceremony of the 2002 Olympics, will sing at Fridays on Vine in Tooele City on Friday.

‘Eclipse 6’ comes to Fridays on Vine ♦

World-famous a capella band, Eclipse 6, will play as part of the Fridays on Vine concert series on Friday.

The group began playing together when four of the current members, plus two other former members, were in college together at Utah State University, according to Dan Kartchner, a member of the band.

“During our time on campus, we had opportunities to sing on campus and things kind of snowballed from there,” Kartchner explained.

They received their big break when they auditioned for a gig singing at the 2002 Olympics held in Salt Lake City.

“What really got us started was performing at the Olympics,” Kartchner said. “We went through a few different rounds of auditions and we met Kenny Ortega, who was in charge of the whole entertainment for the Olympics. We didn’t know that at the time, so we sang a song for him and we met with the committee. They offered us to sing at the opening ceremony. We sang ‘Hard Times Come Again No More.’ That whole moment kind of changed our whole trajectory of performing, because it really gave us a lot of visibility and it jump started our career.”

Since their time performing at the Olympics, Eclipse 6 has performed all over the globe.

The group only sings a capella and they would describe their style as contemporary, which includes jazz and pop.

They have even sung gospel and Christmas music, according to Kartchner.

“We have no instruments,” said Kartchner. “It’s really unique for someone who has never experienced an a capella show before. Our vocal percussionist, Kevin, might blow your mind. You won’t believe that there are no instruments involved.”

This will be Ellipse 6’s first performance at Fridays on Vine.

“We’ve been singing together for a long time but we’ve never had to take a break like we had to during the pandemic,” Kartchner said. “We have sung a few times in the past few months but I think all of the guys are just super excited to be on stage again. We are excited to be able to share ourselves creatively and be back in front of people again.”

The show in the park on Friday will be for all ages, according to Kartchner.

“Our show is very family oriented,” Kartchner said. “All of the members pride themselves in holding our music to a standard that our mothers would approve of. So, this is definitely a family show. We are looking forward to sharing music that people might know as well as some that might be brand new.”

The concert will take place on Friday at 7 p.m. at the Aquatic Center Park in Tooele City located at 200 W. and Vine Street.

Those attending are encouraged to bring chairs or blankets to sit on, as bleacher seating is limited.