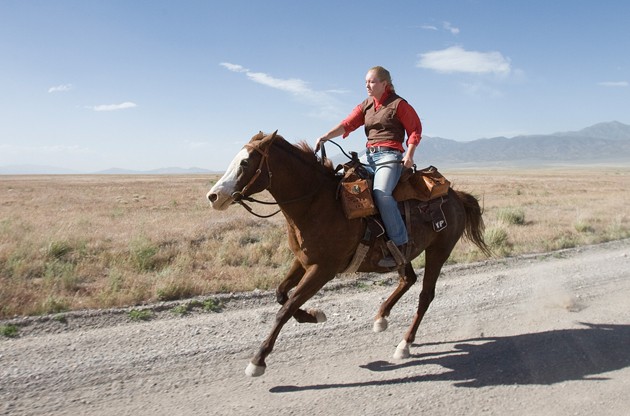 From June 5-15, the annual Pony Express Trail re-ride was held and Jessica Reit of Fairfield (above) was one of several riders who participated in the 1,966-mile event from St. Joseph, Missouri to Sacramento, California. Reit is photographed on the Faust Road portion of the trail through Rush Valley. (David Bern/TTB Photo)

June 22, 2017
On a dusty Pony Express Trail, the unexpected can happen

If there’s a place where light, wind and time often converge to create the delightfully unexpected, it’s the Pony Express Trail in Tooele County.

During the late afternoon of June 11, I was on the trail to photograph the 2017 Pony Express Trail re-ride through the county. Held every June since 1977 by the National Pony Express Association, the re-ride celebrates the trail’s brief, yet historically significant reign between 1860-61. For 18 months during those two years, Pony Express riders land-linked both coasts by delivering the mail.

During the re-ride, several hundred volunteers on horseback perform an organized relay the length of the entire trail, from St. Joseph, Missouri to Sacramento, California. They cover the 1,966-mile distance in about 11 days, riding 24/7 through portions of Kansas, Nebraska, Wyoming, Utah and Nevada.

Also while riding, they carry the Pony Express leather “mochila,” which is filled with mail and is passed forward from rider to rider — just like the original Pony Express riders did before the Transcontinental Telegraph made fast mail delivery by horseback obsolete.

The re-ride’s direction of travel is switched each year, and for 2017, it headed west from St. Joseph on June 5. After the entourage crossed the Wyoming/Utah border at Evanston, it proceeded west to Echo, then north to Henefer, past East Canyon Resort, over Big Mountain, down Emigration Canyon and into Salt Lake City.

From there, riders headed south through Salt Lake Valley to Fairfield then into Tooele County at Five Mile Pass. About a mile west of the pass is where I parked my truck just below a small rise on the trail. While I waited, I monitored the National Pony Express Association’s website on my iPhone, which provided a real time report of riders’ progress along the trail, thanks to a GPS device placed in the mochila.

Although the sky was cloudless, conditions were challenging to photograph one of America’s most romanticized historical events from the days of the Old West. Causing the challenge was a constant, hard wind from the southwest and a torrent of airborne alkali dirt that rose from the trail every time a vehicle or ATV passed by.

With the website showing a rider about a mile away, I walked several yards east of my truck to a Pony Express Trail sign and waited for a rider to appear. Within minutes, a group of support vehicles, with large horse trailers in tow, appeared over the rise, followed by a huge dust plume. About 15 minutes later, a rider, dressed in Pony Express regalia, sans a cowboy hat because of the wind, came over the rise with a support vehicle — and dust plume — behind.

Within seconds the rider and support vehicle went by me. Although I was upwind, the plume still coated my camera gear and me with a patina of white, gritty dust. I jumped into my truck and began to follow the Pony Express armada to get more photos. Carefully, I passed each vehicle and the rider to park a few miles ahead at the next relay point where riders, horses and the mochila were hastily exchanged to keep the re-ride on schedule.

For miles, I photographed rider after rider at relay points and in between. But I didn’t feel I had captured the “essence” of the re-ride until a relay point a few miles east of Faust.

There, I briefly met Pony Express Rider Jessica Riet, 24, of Fairfield. Riet and her parents Dave and Sandy, are Pony Express re-ride veterans. I watched as they calmly yet quickly helped inbound riders get off their horse, remove the mochila, and get a fresh horse and fresh rider underway. At this relay point, it was Jessica’s turn to ride.

As her father affixed the mochila onto her horse’s saddle, Jessica turned to me.

“You better be quick,” she said, noting the camera in my hand. “Because I’m fast.”

Unlike the other riders I had photographed, with ease she lifted onto the saddle and suddenly bolted off at a full gallop with a plume of dust following behind her and her horse. For a moment, light, wind and time converged to give me and my camera an unexpected glimpse of what it must have been like on the trail in 1860.

The 138-mile stretch of the Pony Express Trail across Tooele County is one of the trail’s last and best remaining vestiges. To me, it is one of the county’s most true Old West treasures that should be honored and preserved for future generations.

And for the annual Pony Express Trail re-ride, too.